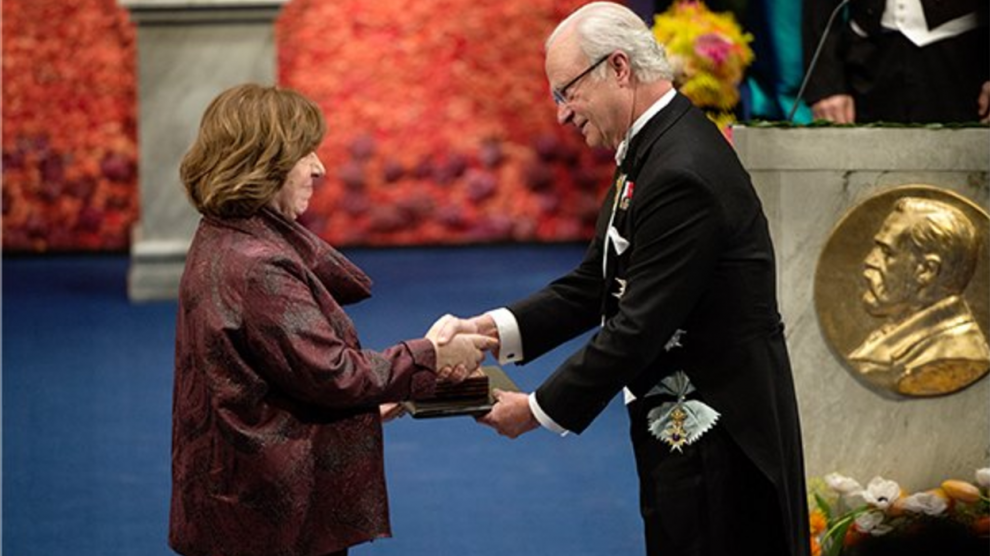 “Reality has always attracted me like a magnet, it has tortured and hypnotised me and I wanted to capture it on paper. So, I immediately appropriated this genre of actual human voices and confessions, witness evidence and documents. This is how I hear and see the world — as a chorus of individual voices and a collage of everyday details. ”

“Today, since man and the world have become so multifaceted and diversified, the document as art is becoming increasingly attractive while art itself often feels impotent,” Svetlana Alexievich, the 2015 Nobel Prize winner in Literature “for her polyphonic writings, a monument to suffering and courage in our time,” says in her brief manifesto, In Lieu of Biography, on her website.

She explains that she had been searching for a genre that would be most appropriate to her vision of the world on order to convey how her ears hear, and her eyes see, life.
“I’ve tried this and that and finally I chose a genre where human voices speak for themselves. Real people speak in my books about the main events of the age such as the war, the Chernobyl disaster and the downfall of a great empire. But I don’t just record a dry history of events and facts; I’m writing a history of human feelings. It’s about what people thought, understood and remembered during the event. What they believed in or mistrusted, what illusions, hopes and fears they experienced,” she continues.

“Reality has always attracted me like a magnet, it has tortured and hypnotised me and I wanted to capture it on paper. So, I immediately appropriated this genre of actual human voices and confessions, witness evidence and documents. This is how I hear and see the world — as a chorus of individual voices and a collage of everyday details. This is how my eyes and ears function. In this way all my mental and emotional potential is realised to the full and I can be a writer, reporter, sociologist, psychologist and preacher simultaneously,” Ms Alexievich said in an interview.

Second-hand Time: The Last of the Soviets, is her latest book. It was translated into English in 2016, three years after writing and it is an excellent example of Ms Alexievich’s craft. She spent three decades writing down the stories of ordinary people in her native Belarus and beyond. Her book is a unique chronicle of that time and place, but with themes of hope and loss that are universal. Love, death and everyday concerns, but also memories of oppression, terror, famine and massacres fill over 700 pages of the book. There is also pride in her country, hope for the future, and a belief that everyone was working and fighting together to bring about a utopia.

Ms Alexievich’s previous books are not different in style and approach. Her first novel, War’s Unwomanly Face, was published in 1985, and is based on previously untold stories of the women who fought against Nazi Germany in World War II. The book is a confession, a document and a record of people’s memory. The author interviewed more than 200 women for it, describing how young girls, who dreamed of becoming brides, became soldiers in 1941.

The Soviet press called the book “a vivid reporting of events long past, which affected the destiny of the nation as a whole.” The most important thing about the book is not so much the frontline episodes as the women’s heart-rending experiences in the war. Ms Alexievich said that, if she had lived in the 19th century, she would surely have been a novelist, but that in our time she felt that fiction was inadequate.

“I’d like to remember the great Chekhov, and his play ‘The Three Sisters.’ The main character in that play says over and over, ‘Now life is terrible, we live in squalor, but in a hundred years, a hundred years, how beautiful, how fine everything will be.’ What has actually happened a hundred years later? We have Chernobyl; we have the World Trade Towers collapsing. It’s a new age in history. What we have experienced today, not only goes beyond our knowledge but also exceeds our ability to imagine,” she said when taking part in a panel discussion at the PEN World Voices Festival in New York, a decade ago.

Voices from Chernobyl, was published in 1998, and it details the psychological and physical ordeal of the people who took part in the clean-up of the 1986 nuclear disaster. It is the first book to present personal accounts of the tragedy. Ms Alexievich interviewed
hundreds of people who were affected by the meltdown – from innocent citizens to firefighters to those called in to clean up the disaster – and their stories reveal the fear, anger and uncertainty with which they still live.

“It’s not an award for me alone, but for our culture and our small country, which has been caught in the grinder throughout history,” Alexievich said during a press conference in Minsk, after Professor Sara Danius, Permanent Secretary of the Swedish Academy, had announced the Award on October 8 2015.

Svetlana Alexievich was born on the 31st of May 1948, in the Ukrainian town of Ivano-Frankovsk. Her father is Belarusian and her mother is Ukrainian. After her father’s demobilisation from the army the family returned to Belarus and settled in a village where both parents worked as school teachers.

She began to write poetry in her school days and she contributed articles to the school newspaper. At that time she needed a two year work record (as was the rule in those days) in order to enrol in the department of journalism of Minsk University, and she entered it in 1967. During her university years she won several awards at the republican and all-Union competitions for academic and students’ papers.

Ms Alexievich is the first Belarusian to be awarded a Nobel Prize by the Swedish Academy and the eleventh woman who has received the Nobel Prize in Literature.