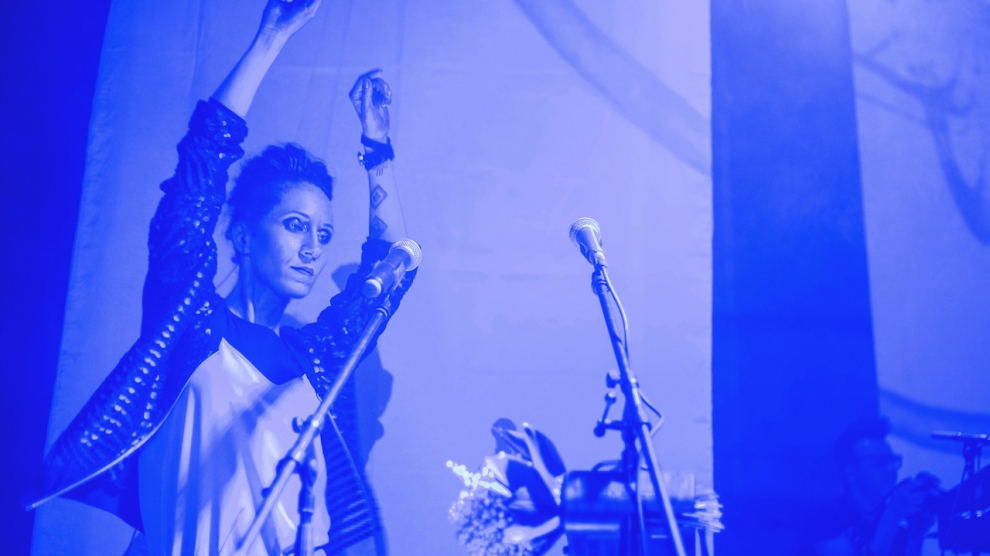 Shuma makes a delicate mixture of high-quality electronic music and pagan songs and performs them in a modern and smooth manner. There are hints of cinematic Trentemøller, smooth FKA Twigs, pagan Björk and clubby Moderate in their sound. Their album “Zhnivo” was chosen as the best album of 2015, in Belarus.

Maryna Shukiurava, AKA Rusia, Shuma’s founder, leader and vocalist, spoke to Andrew Wrobel, about how she was inspired by Belarusian culture as well as electronic music from the UK: she also talked about the historical trauma the Belarusian ethnic and cultural identity is experiencing from having huge Russia as a dominating neighbour.

Tell me first how Shuma came to be. Did you have a specific concept of what the band would look and sound like or did it happen more organically?

Well, I was wondering about how to bring the beauty and the depth of the archaic Belarusian culture toyoung people in Belarus who are distanced from their roots. I was searching for a concept; researching the origins of our culture and I took these archaic songs. I wanted to understand much more than just the popular culture and what people can see in museums and I started to become deeply involved in the topic. My friend, Nadzeya Chuhunova, and I spent weeks taking part in ethnography expeditions; trying to save what remained of this singing culture which was, and is still is, disappearing very quickly.

I have always been fascinated by electronic music, especially the UK sound and scene. I decided to speak to young clubbers in Belarus about the music they liked and eventually, I created Shuma, which performs digital archaica or, in other words, archaic songs presented in digital arrangements. This idea is working and today there are many more people who are interested in our traditional culture than three years ago.

We do a capella performances for people all over the world but it is true that young people prefer clubbing. Many young people are discovering this culture with respect and interest and I am proud to say that Shuma is a sort of bridge between the past and today.

So how do you make the new arrangements?

We don’t change the melodies much and we leave the old dialects, so listeners automatically become traditional songs -bearers just by singing together with us. We also decided not to use the authentic vocal manner, called “wild open voices”, so as not to shock people. Sometimes, however, we sing the a capella songs in an authentic manner at concerts in order to present this culture in a gentle manner. In Shuma, we use sub-tone and soft voice techniques.

There are a few of you in Shuma: you and Nadzeya sing and Alexei Budzko does the live programming. Alexei Korobeynik is the composer 118 and makes the arrangements and sound design and Nick Cherny is also a composer. What is your background and how do you make music together?

We choose the songs and then bring them to Alexei Korobeynik, AKA Alexis Scorpio, and then we try to find the right arrangement together. Nick Cherny joined us for the first album but in most situations we work with Scorpio.

I am not musically educated but I have music in my head and Scorpio is my hands, if I can put it that way. He is a brilliant composer and musician. He seldom leaves the studio and actually prefers staying there to performing on stage. So Alexei Budzko, AKA Shumaboy, performs Scorpio’s music live with Ableton on keyboards and stuff. He is a classical double bass player who works with orchestras worldwide.

My aim is to find the right song; to hear how it may sound and to inspire Scorpio or Cherny to take it out of my head. As you see, I don’t produce music myself and I need assistants. It also has great advantages, I can also pick their brains. The entire team is involved in traditional culture and they very much enjoy working in this field. We also work with BOpromo agency, which helps us with the visual conception of our gigs.

So, my part is to find things and to inspire people to bring it to life. We work like a family.
I am also responsible for the vocal arrangements and how for Shuma’s future development. Your experimental musical style, visuals and strong focus on aesthetics is something people would probably see coming from, say, Scandinavia.

Are people surprised that you come from Belarus?

Not really. Actually, in general, traditional cultures have much in common so it is very easy to mix them up. People are not experts in varieties of Scandinavian or Asian cultures; don’t you agree? Let’s be realistic — many people have no idea about Belarus at all. But European and American audiences are surprised to discover that Eastern European music can sound so good. That is true.

How do you imagine your audience?

Well, we know them: they are open minded, audio-sensitive, forward thinking, loving, smart, self-developing personalities of any age and profession. At our concerts we meet people whose ages span from ten to ninety.

It’s great that you can actually reach people of literally all ages. What is your message to the audience?

What do you want to convey through the music? Our message is studying your root culture helps you to understand all humanity. By this I mean that your cultural context gives you the key to understanding all the cultures of the world. They have much in common if you only examine the roots.

What are the Belarusian roots?

We have suffered a historical trauma to our ethnic and cultural identity because we have huge Russia as a dominating neighbour, but our Belarusian traditional culture is really great and supportive. It is important to feel yourself as a part of a certain ethnical group; to know yourself better; to understand your background better and to see your life path more clearly. I am jealous of people who have this connection to their culture and traditions. I think we Belarusians are confused in this sense.

Shuma are one of the most sophisticated acts in the Belarusian music scene and, as I mentioned before, one that could come from elsewhere in Europe. Today, culture, including music, is essential in building a nation’s image and helping shape perceptions Shuma does it very positively for Belarus. Why do you think there are so few acts from Belarus whose work translates internationally?

I think this is because of cultural and economic reasons. Our big neighbour is feeding us with its context and it is impossible to resist because of the size of the country.

Our economy is very weak. People here are working hard just to feed themselves and they have no possibility or power to think about their cultural needs. When you are hungry there is no space for culture, unfortunately. Cultural managers, here, are sacrificing their family lives to develop culture. This is normal in undeveloped countries such as Belarus.

I respect this choice because I am on this side as well. I do not live a happy life in the common sense of looking at the situation but when I see the resul of our cultural efforts I feel happy and in my place. I am glad to be here.