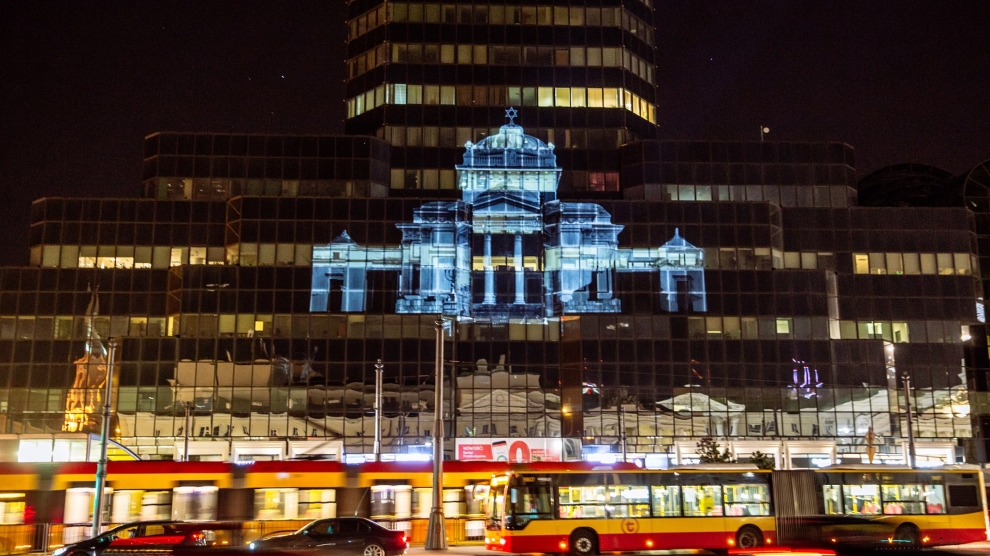 Warsaw’s Great Synagogue is set to symbolically return to Plac Bankowy. On April 18, the Open Republic Association plans to commemorate the 76th anniversary of the Warsaw Ghetto Uprising with a multimedia event created by the artist Gabi von Seltmann. On that night (on the eve of the anniversary of the uprising), an image of the synagogue rising from the rubble will appear on the wall of the so-called Blue Skyscraper which was constructed on the site.

The project represents a symbolic reconstruction of the Great Synagogue, destroyed by the Germans after the uprising had been put down. Its site (formerly Tłomackie 7) is currently occupied by the foundation of a glass skyscraper (today Plac Bankowy 2). On the wall from the side of the Bankowy Square, an image of the destroyed Great Synagogue will be projected. It will be animated in such a way that the viewer will have an impression that the building is rising from the ruins. Thanks to virtual multimedia animation techniques, in the culminating moment of the projection an image of the Great Synagogue will appear on the wall of the skyscraper. The projection will be accompanied by a sound collage. Visitors will hear archival recordings of the cantor of the Great Synagogue, Gerszon Sirota, who died in the Warsaw Ghetto, and fragments of the poem Bashert, read by its author, Irena Klepfisz, daughter of Michał, a soldier of the Jewish Combat Association.

The main idea of the second edition of this art project is to recall the history of the place and the inhabitants of the city who used the synagogue from 1878. As Monika Płatek, a professor at the University of Warsaw, explains: “It was a place of worship and culture at the same time, a symbol of Poland which was a country of openness and a diverse cultural and religious identity. I do not know why we neglected the reconstruction of the Great Synagogue, even though we reconstructed the cathedral at the Old Town. How could it be that in a country which is so sensitive to symbols we allowed such a symbolic triumph of the Nazis?”

The Great Synagogue ceased to exist on May 16, 1943. The blowing up of the 65-year old synagogue as a final act of the destruction of the Warsaw Ghetto Uprising was an eruption of hate and was intended as the “end of the Jewish district in Warsaw”. The symbolic return of the Great Synagogue to Tłomackie, on which visitors will see a big sign saying ליבע (love) during the projection, defies “the triumph of the Nazis”. The artist intended to show that love overcomes hate and restores the memory of the murdered Jewish population of Warsaw.

To remember the past is important because it allows to build the future with wisdom. This moving performance speaks to us through image, sound and emotion. It bears testimony that remembrance and love have the power to overcome destruction and death.

This is probably the first initiative which is based on a virtual commemoration. The creators of the virtual monument deal with the question of memory of the non-existent city and its inhabitants, as well as the problem of lack of memory in the urban layer of today’s Warsaw.

The event takes place on April 18 from 9pm to 11 pm, and will be broadcast live at www.otwarta.org. For more details please visit the Open Republic Association Facebook page. Photo courtesy Open Republic Foundation.