Polish video game developers Different Tales are set to release a major new game, set in the Białowieża Forest and inspired equally by Polish myths and legends and by real-world ecological problems.

Werewolf: The Apocalypse – Heart of the Forest will be based on the famous 1990s role playing game of the same name (itself a part of a larger fictional setting called World of Darkness) but will give the traditional North American settings a distinctly Polish twist.

The studio, whose developers have previously worked on the similarly Polish-inspired The Witcher published by CD Projekt, are known for their unique approach to tailoring interactive entertainment that focuses on storytelling and atmosphere rather than on traditional action game fare such as action and shooting.

In the game, which is styled as an interactive illustrated visual novel, players take on the role of Maia, a 24-year-old American woman who comes to Białowieża Forest to uncover the secrets of her Polish ancestry following strange dreams that seem to hint there is a lot more to the forest and herself than at first meets the eye.

During the course of the game, players will make choices as Maia that determine how the story unfolds. But it’s bit more involved than your average choose-your-own-adventure book. Players will have to manage Maia’s stats, the two main ones being Rage and Willpower, as choices affect them differently. High Rage means you can be brazen and take action more readily, while some harder choices drain the protagonist’s Willpower.

Over the course of the game, the choices players make will shape not just how the story unfolds generally but also smaller interactions with the various non-player characters. Some actions might endear Maia to a character while others might make them angry. The developers insist there is no “right way” to proceed but only deal with the consequences of what the players choose to do. 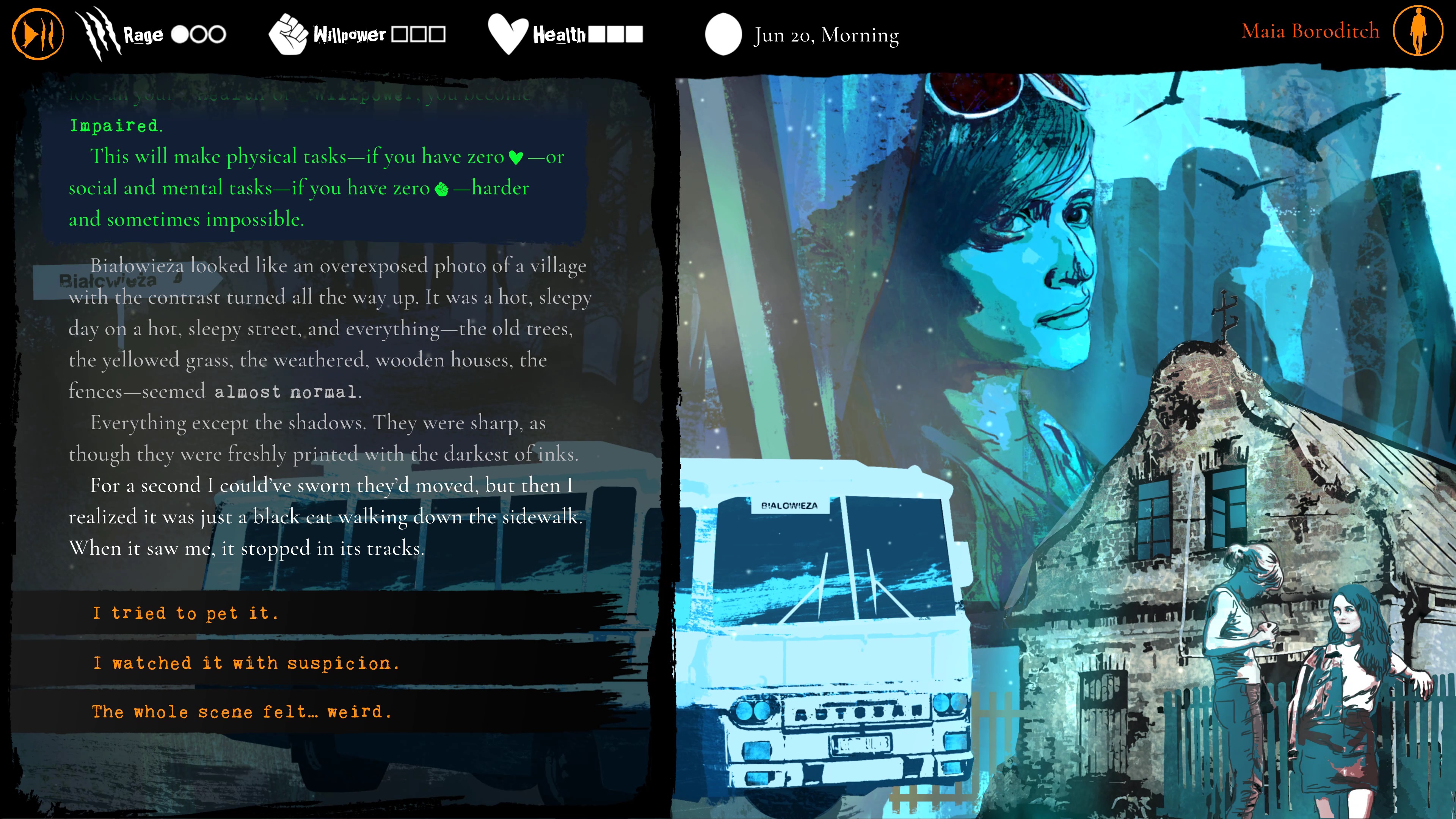 While the game is text-heavy – after all, the genre name does contain the word novel – the proceedings are accompanied by dark and evocative stylised illustrations that draw heavily on myths, legends, and the World of Darkness setting which will be familiar to those who have played other titles set in it such as the 2004 cult hit Vampires: The Masquerade – Bloodlines.

Another aspect that might be familiar to those who have played World of Darkness games before is a focus on real-world environmental concerns, which have always been present in the source material.

The Białowieża Forest is one of the last and largest remaining fragments of the primeval forest that once stretched across the European Plain. It is also home to some 800 European bison, one of two extant bison species in the world.

In 2016, the Polish government attracted critique and protest after it allowed increased logging in Białowieża. Jan Szyszko, minister of environment at the time, claimed the tripling of logging permits was necessary to prevent beetle infestations and forest fires, despite scientists warning of the very likely negative consequences of deforestation.

Two years later the European Court of Justice ruled that Poland had failed in its obligation to protect the primeval forest and ordered an immediate repeal of the logging permits.

But it was a short-lived victory for the environmentalists as by 2019 the loggers had already used up quotas that were supposed to last until 2021, putting the forest in danger again should the government decide to hand out new logging permits.

“Untamed nature versus human greed is one of the core topics of the game, and we decided to use a place and a situation that we know, and personally care about,” says game designer Artur Ganszyniec.

The Different Tales studio is no stranger to mixing fiction and reality as proven by their previous efforts, Wanderlust: Transsiberian and Wanderlust: Travel Stories, two visual novels that also deftly incorporate real places and real history into fictional scenarios.

Werewolf: The Apocalypse – Heart of the Forest is slated to be released in the final quarter of 2020, and those interested can be notified on release by signing up at Steam or GOG.

A closer look at the Nike Literature Award’s seven finalists
Is Poland’s wait for a car it can call its own nearly over?
Comment