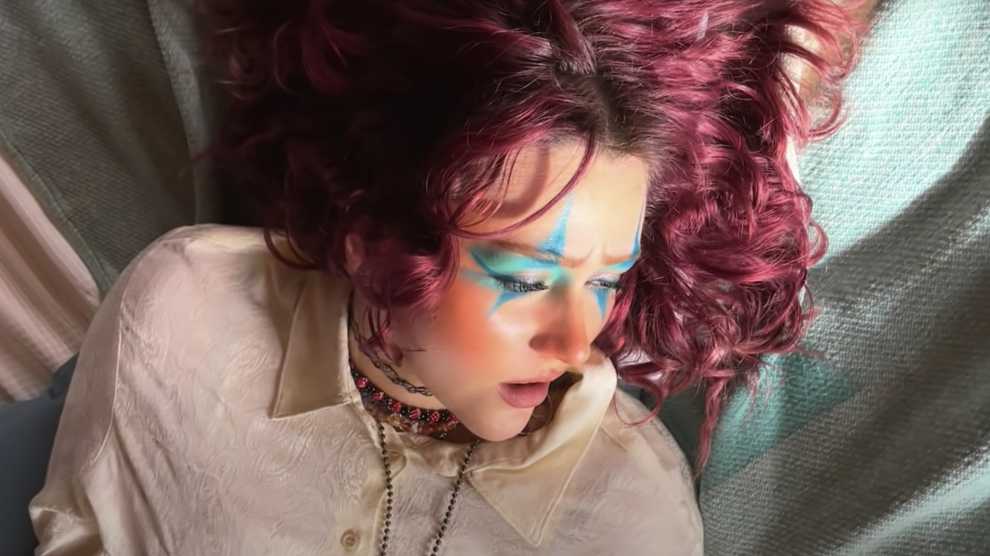 Slovak singer Karin Ann is asking all the right questions, and attracting a following of young people who increasingly want answers.

The 19-year-old performer Karin Ann has been referred to as the Slovakian Billie Eilish, for her vocal style, her visuals, as well for her enormous potential. She only released her first Slovak language tracks, Zrkadlo (Mirror) and Zavolaj Mi Zajtra (Call Me Tomorrow), in the spring of 2020.

Also described as “the voice of Europe’s Generation Z”, Ann’s international audience began to grow after the release of her first English-language song 3AM, which was especially popular amongst young women from Central and Eastern Europe, especially the LGBT+ community, or those simply interested in social justice issues.

Ann doesn’t sing about love or heartbreak, but mental health, insecurities, human rights and feminism. She’s frank about her own struggles with mental health and the importance she places on speaking out about the need for self-care.

“The song is about some of the darkest parts of my mind during some of my darkest times, and because I feel like a lot of people blame themselves for having mental health issues – even though it isn’t their fault,” she says about here song I Yearn for Agony.

“I thought maybe this song could help anyone going through something similar, or maybe help people who haven’t been through anything like this to understand what it’s like.”

What makes the message in Ann’s songs uniquely appealing is that she also addresses the impact the Covid-19 pandemic has had on the mental health of her generation: two years of online lessons and lectures, and endless lockdowns at a time supposed to be “the best years of your life”.

“During the quarantine, I had a period when I was depressed and very hard on myself. Instead of drowning in it, I decided to express my feelings out loud with the single I’m a Loser. I thought maybe I was a loser, so what? I think a lot of young people feel like me,” she says.

Released in September, I’m a Loser is accompanied by a colourful music video shot on an iPhone and directed by Slovak filmmaker Michal Kunes Kováč, reflecting the aesthetics of many contemporary coming of age indie films.

As her debut mini album Lonely Together gained considerable traction, local and international publications were quick to hail Ann as Slovakia’s most influential musician of the moment.

In August, she was the artist of the month for the Spotify Equal Czech and Slovak programme, an initiative aiming to offer a larger platform to female artists from around the world. Her song In Company was featured on Spotify’s Equal Global playlist alongside tracks from Billie Eilish, Anne-Marie, and Alessia Cara.

Ann even ended up on a Spotify billboard on New York’s Times Square, the first Slovak to be featured on such a visible spot.

“I am glad my music can reach other people in this way and that it can help them identify with what I sing about,” she says.

While the billboard in Times Square has certainly increased Ann’s international recognition, her appeal remains concentrated in the countries of Central and Eastern Europe, especially Czechia, Germany, Poland, and Slovakia, where the singer was even able to tour this year as Covid-19 restrictions were lifted.

In September, she won the Discovery of the Year category at the Czech Žebřík music festival – the first award of her career. There are likely to be many others.

Some of her most impressive shows have been in Poland, where she earlier this year performed alongside Polish singer sanah.

Her performances in Poland were not without controversy.

Draped in a rainbow flag, Ann declared: “I would like to dedicate this song today to the LGBTQ people here in Poland because I know you guys don’t have it easy. You deserve to be loved and you deserve to feel safe.”

A week after the performance, TVP fired the editor of the programme, Radosław Bielawski, saying that, “Karin Ann used her performance as an opportunity for her own campaign, causing discomfort to many viewers and at the same time drawing the programme into an ideological dispute”.

“I do not think it is OK to fire someone just because I exercised my fundamental right to freedom of speech,” Ann said in response.

The song she was singing, Babyboy, is about a world in which a straight, white guy experiences discrimination and harassment, and in its opening the music video asks, “How absurd would all the injustices in our world look to our society if the roles were reversed?”

It’s a good question, and it’s great that artists like Ann are asking them.