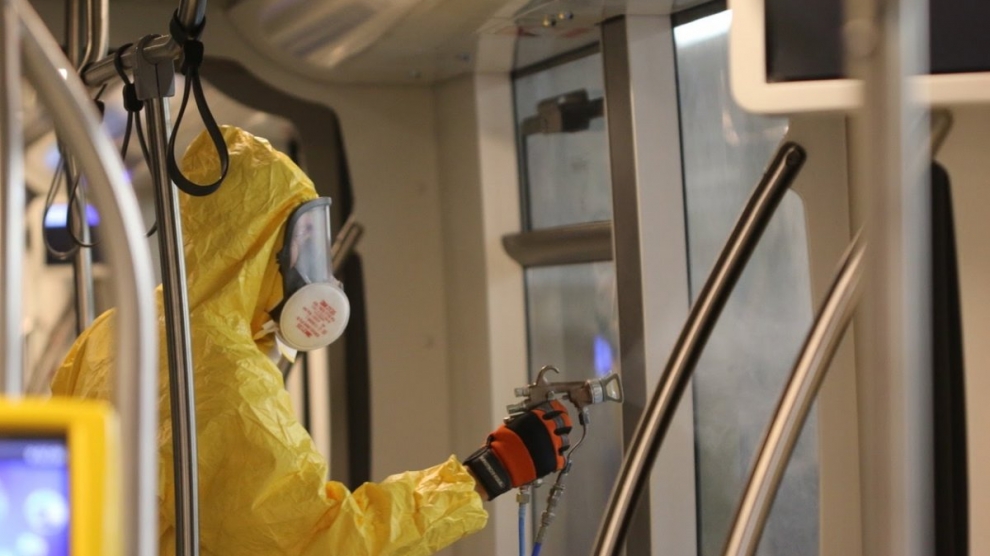 An innovative solution to fighting the spread of coronavirus is now available in Czechia, a country with one of the highest infection rates in Europe.

Resysten, a Hungarian start-up that manufactures a durable hygienic coating that protects surfaces from the spread of Covid-19, has struck a deal with Czech start-up Titanux to bring its innovative solution to Czechia, which currently has one of the highest infection rates in Europe.

Resysten, which eliminates the presence of harmful pathogens (including the coronavirus) by up to 99.9 per cent, is already in extensive use in Hungary’s public hospitals and passenger transport networks, and its new partnership has been launched by applying the product to the most commonly shared surfaces at the Czech Academy of Sciences in Prague.

Resysten has seen a surge in new business in the wake of the Covid-19 pandemic, as its coating product has now been proved to be effective against the spread of SARS-CoV-2 on surfaces – one of the most common ways of spreading the virus from person to person. Its effectiveness has been backed up by public and private sector clients in its native Hungary over the last six years, with the product also counting Audi, T-Mobile, VT-Arriva, KFC and Metro stores amongst its early adopters – and with partnerships in 14 countries around the world.

To date, the company has treated a total 150,000 square metres of surfaces, including all 27 kilometres of the escalator handrail on Budapest’s metro network, and over 700 of its vehicles.

Resysten, which was developed in response to the SARS epidemic of 2003 as a way to combat Hospital Acquired Infections (HAIs), claims to be the most advanced photocatalytic hygienic coating technology in the world today.

Upon contact with light, the solution produces hydrogen peroxide which prevents the presence of pathogens on any surface. It has been developed to integrate into any surface on a molecular level, meaning that it cannot be removed by conventional cleaning methods and so it remains active for up to a year. These two key properties result in surfaces that protect users and their environment from the spread of contamination.

According to Shajjad Rizvi, Resysten’s CEO, “We are beyond excited to announce Titanux as our partners for Czechia, allowing us to make a strong and valuable presence in the country as we continue to fight together against Covid-19. We are proud that through our partners in Czechia, we’ve had a unique opportunity to coat the interior of the headquarters building of the Czech Academy of Sciences, which is a meeting place for important personalities of science. We look forward to continuing expanding our presence and help ensure that Czech residents and visitors alike are effectively protected against the coronavirus and other harmful pathogens in the long-term, as well as helping affected industries in both the public and private sectors.”

“We have to of course reiterate that Resysten is an additional solution that significantly reduces the risk of the spread of coronavirus on surfaces, but it’s not a cure – and it will only work at its most effective if people continue to be vigilant and taking precautions such as wearing masks, maintaining social distancing and basic hygiene rules such as regularly washing your hands. We’re all in this fight together,” adds Rizvi.

Resysten was founded in 2014, in Budapest, Hungary by Janos Pinter and Peter Lehoczky. Its aim is to become a major ally in the world’s fight against coronavirus, by becoming another key tool in limiting its spread across the population and allowing public health systems, institutions and private businesses to operate as safely as possible during and after the pandemic; to date, partnerships have been established in 14 countries around the world.