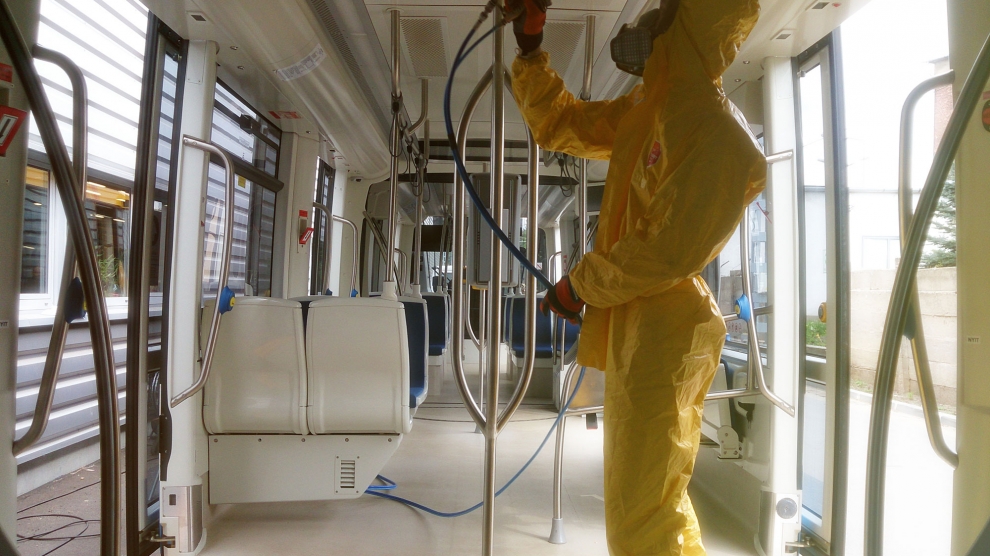 With an increasing number of countries in Europe now locked down in order to prevent the further spread of the coronavirus epidemic, governments, institutions and the general public are realising how important hygiene and disinfection measures are for protection against pathogens.

For many of the region’s cleantech start-ups, the coronavirus outbreak presents an opportunity to speed up their product development and roll-out, as governments and local authorities look for solutions to halt the spread of the virus.

One of these start-ups is the Hungarian company Resysten, whose technology offers an innovative way of protecting various surfaces and preventing the spread of infection. Using the power of light, the start-up’s special coating remains protective for up to a year.

The technology is especially important in the fight against the Covid-19 outbreak, as the virus can survive for a relatively long time on a number of surfaces.

A recent study by the New England Journal of Medicine found that SARS-Cov-2 – the virus which causes Covid-19 – can survive for hours and in some cases even days depending on the type of surface.

“Chemicals can get rid of microbes for a very short time period. So they are just cleaning everything. But then the next person touches the surface and it’s immediately contaminated again,” says Peter Lehockzky, CEO of Resysten.

But with Resysten’s anti-bacterial solution this risk is eliminated. The solution, called WhiteTitan, is completely safe to humans, but kills germs, bacteria or superbugs.

WhiteTitan is sprayed over and bonds at nano level to the surface, and then, when in contact with light, becomes active and remains so for a year, on any surface, no matter how many times it is touched, or even cleaned.

“Basically, what it does is serve as an added layer of protection. As soon as you touch a surface after disinfection that surface becomes infected. Our solution works twenty-four hours a day, seven days a week, 365 days in a year without being reapplied: you got a year full of protection,” Shajjad Rizvi, Resysten’s regional development officer tells Emerging Europe.

The company has already seen a lot of success in Hungary where its products are currently being used in hospitals, public transit systems and in the private sector, such as the food industry.

“The heath-care system in Hungary has already adopted it. We spray hospitals and we have actually reversed an upper trend of hospital-acquired infections,” Mr Rizvi continues.

This is corroborated by a report from the Felső-Szabolcs in the town of Kisvárda, which shows a marked decrease in the amount of bacteria present on the surfaces that have been treated with Resysten’s spray.

“Multinationals have [now] requested that places where their employees work, [such as] behind a computer desk, are also coated with our protection. We have been very effective across a number of diverse environments,” adds Rizvi.

Peter Lehockzky says that companies like Resysten have a special role to play during pandemics and outbreaks of disease.

“The Hungarian government just appointed us as a strategic partner in the fight against this epidemic. They are now considering where to use it. They want to do everything they can to slow the epidemic,” he says. The country’s Department of Epidemiology and Infection Control has also given its approval to WhiteTitan,

“Based on the results of tests, we can state that as long as the occurrence of photocatalytic reaction is assured, inhibition of bacterial growth is achieved on the surfaces treated with [WhiteTitan],” the department states.

There are currently 85 infected people in Hungary according to official sources. Seven people have recovered, but three have died.

Like most of emerging Europe, Hungary has been in a state of emergency since the March 11.

With the spread of the virus, the company says they have received more interest in their technology than usual.

“Yeah, we see it on a daily basis, we now have 10 to 15 different countries interested,” says Mr Lehockzky.

Janos Pinter, Resysten’s chief data officer, says that the company’s solution is easily scalable to meet the needs of their clients.

“I think that when this pandemic passes there will be a time when everybody will realise how important it is to prevent this type of situation happening again,” he concludes.