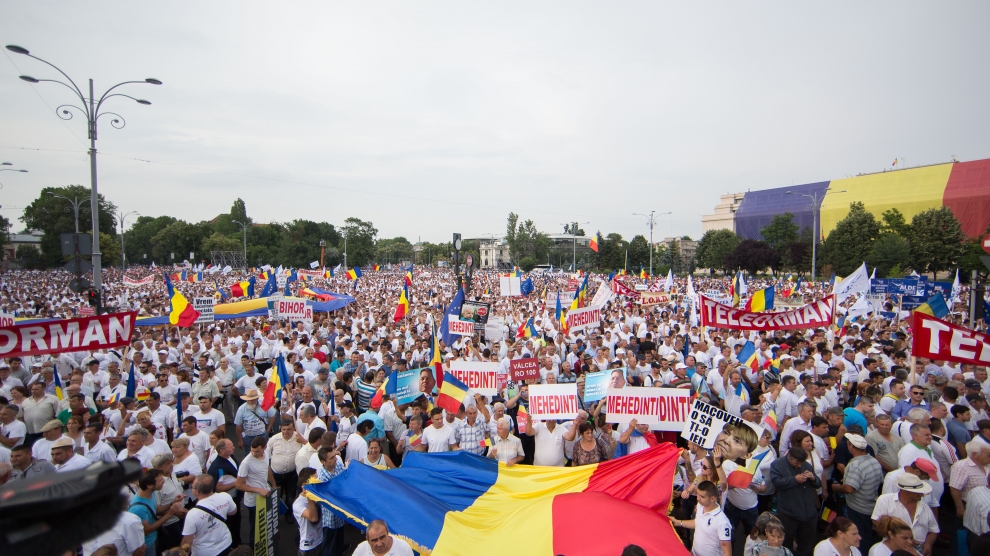 Romania’s government would like you to believe that hundreds of thousands of ordinary people took to the streets of the country’s capital Bucharest on the evening of June 9, demonstrating against alleged abuses being carried out by the judiciary and the secret services: what the government likes to call ‘the parallel state’. Indeed, according to television news channels loyal to the government, it was the biggest public demonstration the country had seen since 1989’s revolution.

The truth is rather different.

In fact, the ‘demonstration’ was a carefully stage-managed event which drew on the vast resources of both the country’s ruling political party, the Social Democrats (PSD), as well as those of the Romanian state itself.

Extra trains were laid on by CFR, Romanian railways, to ship thousands of obedient pensioners and civil servants into Bucharest, the Romanian capital. Coach and transport companies had their vehicles requisitioned by PSD-controlled local councils under threat of losing municipal contracts. Bucharest’s mayor, the spiky Gabriela Firea, welcomed the hordes. Roads in the north of the capital were closed, and the huge public square in front of the government building, Piata Victoriei, was off-limits to anyone but the PSD faithful. The government building itself was draped in an enormous Romanian flag. Parliament handed its vast car park, usually reserved only for dignitaries, over to the PSD for the day.

Not everyone present wanted to be there. On a portal specially created by a human rights NGO, hundreds of stories were published telling of people being forced to attend the demonstration else they lose their jobs, including teachers and medical staff. For many people in Romania’s small towns and villages – where mayors are all-powerful – the threats were real.

Indeed, for a demonstration which ostensibly set out to protest against alleged abuses being carried out by a rather vague, foreign-controlled ‘parallel state’, all the event managed to do was confirm the fact that it is the ruling party itself which has now captured almost the entire Romanian state. Reductio ad Ceausescum is all too easy on occasions such as this, but the comparisons are valid: there is now almost no separation between the ruling party and the Romanian state. It is no longer a government, it is a regime.

On June 8 the verdict in the trial of PSD leader Liviu Dragnea – charged with corruption and already serving a suspended sentence for rigging an election – was once again delayed by Romania’s Supreme Court, this time until June 21. By then Dragnea hopes to have removed Laura Codruta Kovesi, the courageous and highly-effective boss of the country’s anti-corruption unit, the DNA, from office.

A ruling on May 31 by Romania’s Constitutional Court (on which judges loyal to the regime have a majority) would appear to have achieved that aim: the court ruled that President Klaus Iohannis must dismiss Ms Kovesi, as ordered to do so some months ago by Justice Minister Tudorel Toader. Iohannis has so far refused to comply with the court’s ruling. Should he delay much longer he is likely to be suspended by the PSD-controlled parliament, allowing an interim president, likely to be Senate leader Calin Popescu Tariceanu – a close ally of Dragnea – to remove the awkward Kovesi.

As such, June 9’s phoney demonstration was really a show of strength by the regime and an attempt to claim vast public support for its ongoing attempts to gain control of the two branches of power which have so far managed to remain outside of its grasp: the presidency and (part of) the justice system.

Indeed, a senior PSD figure, Nicolae Badalau, somewhat gave the game away on June 7 when he said that the protest was needed because there were still some parts of the state that were “acting independently.”

For a start, the event – though well-attended – was a media disaster. The speeches made by PSD leaders were poor, and raised little enthusiasm. Dragnea’s speech was sinister, and ended with a direct attack on the president. Yet it roused barely a handful of people. By the time the PSD top brass had gathered on stage to sing the national anthem and close out the evening, many thousands had already begun to head for their trains and coaches home. Nobody was listening anymore.

A similar show of force in the autumn of 2014 is widely considered to have been a key blow to former PSD leader Victor Ponta’s chances of winning that year’s presidential election (he eventually lost out to Iohannis). Held at Romania’s national stadium that particular event, on Ponta’s birthday no less, reminded many people of similarly megalomaniac public displays of affection for the country’s former dictator, Nicolae Ceausescu. Ponta, who has since left the PSD and is currently trying to reinvent himself as a genuine, European-style social democrat, has since claimed that he thought the whole thing was a bad idea.

However, the location for June 10’s phoney demonstration was chosen more carefully.

Piata Victoriei has since January 2017 been the scene of numerous protests against the PSD-led government and its craven attempts to weaken the justice system. In early February 2017 more than 300,000 people packed the square to protest a government decree that would have seen corruption charges against many leading politicians dropped.

The next move belongs to Mr Iohannis, widely viewed as the last good man standing. Should he comply with the Constitutional Court’s decision and fire Ms Kovesi he would alienate much of his support and would be finished as a politician in Romania. He may not care: he is rumoured to be the odds-on favourite to take over the presidency of the European Council from Donald Tusk next year.

If he does not sack the DNA boss, he will be suspended by parliament and will 30 days later face a recall referendum (which he is likely to win). His other – nuclear – option is to resign and force an early presidential election (which again, he is likely to win). Given how the presidency has in recent weeks been stripped of most of its remaining powers, he might well consider that it is simply not worth the bother.

That leaves Romania in the hands of the PSD, these days resembling an organised crime syndicate which long ago gave up pretending to be a democratic political party. Since it returned to office following 2016’s parliamentary elections it has spent almost all of its time and effort on keeping its leading figures out of prison, and its blindly loyal coalition of pensioners and civil servants happy with meagre pension and pay rises and promises of more.

Meanwhile, inflation is at its highest level in a decade – the highest in the EU – and the state coffers are empty. Investment has ground to a halt while infrastructure creaks, infamously worse than even neighbouring Bulgaria. More than 17 per cent of children do not finish school. Almost half of young people under 18 are at risk of poverty or social exclusion. The in-work poverty rate is Europe’s highest. Talented young people are leaving the country in record numbers, as are experienced doctors. A measles epidemic has killed more than 50 people, mostly young children. There is a chronic shortage of medicine, particularly for cancer patients.

Business, riding a wave of regional growth, has so far weathered the storm. But with growth now slowing, many entrepreneurs are concerned about a return to crony capitalism and constant changes to fiscal policy, as well as a plan to raid private pensions. Foreign investor confidence has fallen considerably.

Romania is running out of time.