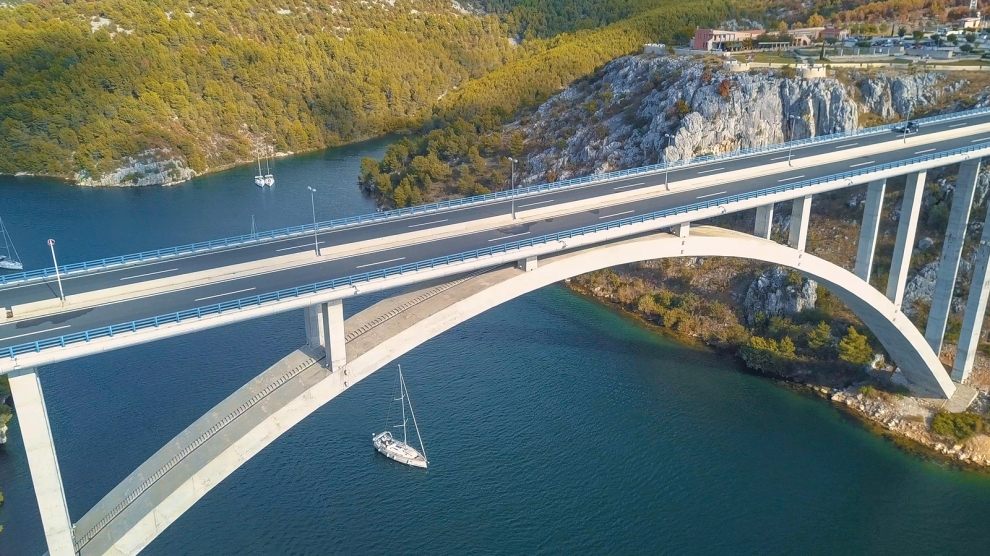 Luka Burilović, president of the Croatian Chamber of Economy, is in no doubt as to the importance of infrastructure to growth and development.

“It influences the quality and diversity of business opportunities, along with the overall attractiveness of the country for business operations and investments. It facilitates a country’s effective inclusion in both the EU single market and the broader global market and promotes regional connectivity.”

Situated at the heart of Europe, Croatia, with its highly developed road and rail network, and the network of sea, river and airports, as well as inland waterways and intermodal terminals, today represents a central link not only between countries in the region, but between the Mediterranean and the rest of the world.

On February 20, 2019, Croatia’s Minister of Maritime Affairs, Transport and Infrastructure Oleg Butković allocated new funds worth 80 million kuna (10 million euros) for the construction, repair, and reconstruction of various facilities in public ports, continuing the government’s investment in the modernisation of port infrastructure on Croatia’s islands.

“Sea ports are a very important and crucial link in the maritime trade’s transport chain,” Mr Burilović explains. “Therefore, ports are required to be effective in carrying out all operations with a high level of safety and protection of people, goods and the environment. In this sense, a developed port infrastructure is a basic prerequisite for the development of a traffic system, the purpose of which is harmonisation of the whole transport system’s development, quality and safety and making it competitive and compatible with other systems in the environment,” Mr Burilović explains.

It is not only the Croatian government which is interested in making the country’s ports more efficient. The China Road and Bridge Corporation (CRBC), currently building the biggest ever infrastructure project in the country (the Peljesac Bridge, which will connect the southern exclave comprising the bulk of Dubrovnik-Neretva County with the remainder of the Croatian mainland), has expresses its interest in the construction of a major road that will connect the western part of the port of Rijeka port – as well as the city’s container terminal – with the city’s orbital highway. It would be one of the most important infrastructure projects ever undertaken in Rijeka, the largest port in the northern Croatian Adriatic.

Additionally, a network of modern motorways and railways places Croatia amongst the more advanced European countries in terms of infrastructure. Three pan-European transport corridors pass through the country, making it an essential part of all major European and international transport routes.

“The road infrastructure in the Republic of Croatia is characterised by high density of quality road networks (highways, semi-highways, freeways) developed in conformity with the Pan-European X, X a, V b and V c Corridors and the Adriatic-Ionian Corridor,” says Mr Burilović. “Further road infrastructure development in these corridors will involve joining the TEN-T network facilitated by the maximum funding from the EU. Several road infrastructure projects are currently being implemented, and the next step in the development of the road network is the construction of state and county roads with access roads to the main corridors, which will enable the maximum utilisation of the highway network.”

Prajakta Chitre, an infrastructure finance specialist at the World Bank, recalls how Croatia, as a new state in the late 1990s, focused on developing its strategic road network as the most fundamental element of its national integration, allowing for the entire country to be well-connected.

By 2014, this debt was consolidated into the government’s overall deficit. These liabilities amounted to approximately 11 per cent of GDP in 2015, and could not be supported by the revenue generated by the companies.

“The combined outstanding debt of public road companies at the end of 2016 was the equivalent of 5.2 billion euros. Even more alarming, most of this debt was due in the next two to five years; a wall of debt, so to speak,” she continued.

The activity of logistics as a set of services related to the transportation, consolidation, handling, packaging and distribution of goods in the supply chain from the producer to the consumer, has been, to the greatest extent, in the hands of manufacturers or traders.

“In the last few years, a number of modern logistics centres have been built, as a result of investments by manufacturers or traders themselves, or by large retailer chains for their own needs. However, it should be emphasised that significant capacities are also in the hands of logistics companies whose services are on the market. Among them, besides the Croatian companies, there are a number of multinational logistics companies. As regards investments in this sector, they are predominantly private,” says Mr Burilović.

“It is estimated that in Croatia around 30-40 per cent of logistics services are being outsourced to logistics companies while on the global market, this percentage is about 70 per cent. Bearing in mind the international trends, it can be expected that logistics operations in Croatia will also become mostly outsourced, i.e. performed by specialised logistics companies. In this case, there exists an additional potential for possible private investments into this sector,” he concludes.

The search for talent: Bosnia’s ICT scene
The US has not given up on Central Europe
Comment