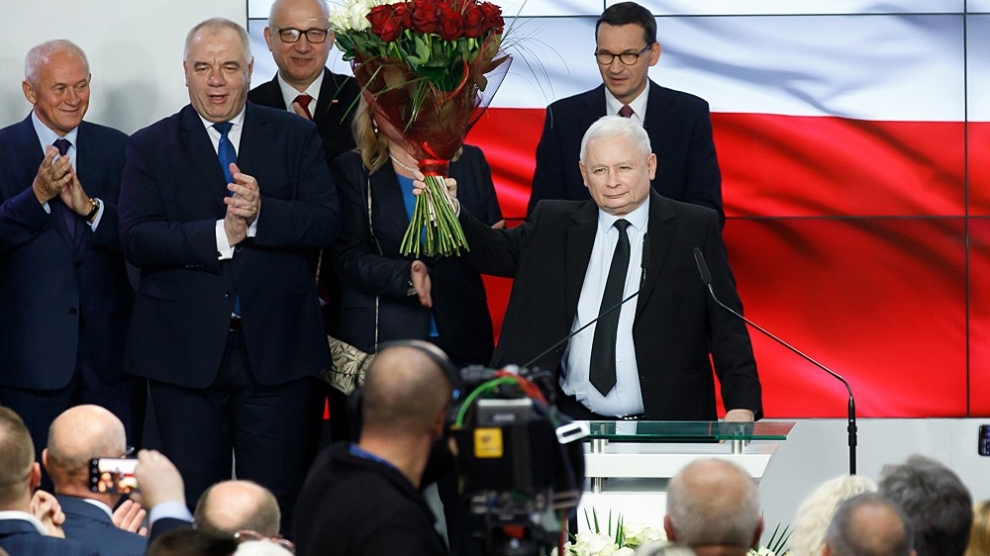 On October 13, 18.6 million Poles – a record since 1989 – cast their votes in a parliamentary election, possibly the most important political event in country’s recent history. At first glance, the results were fairly unsurprising, with the ruling Law and Justice party (PiS) securing a clear victory in the Sejm. However, closer inspection reveals key shifts in the country’s political climate, something which is not only pertinent for Poland, but for the region as a whole. Now that the dust has settled, and the results confirmed, it’s time to take a deeper look at what these results mean for the country’s future.

Why Law and Justice won

As polls predicted, PiS secured 44 per cent of the vote in the Sejm, winning 235 seats, unchanged from the 2015 election. Speaking at roundtable discussion dedicated to analysing the election, held in London on October 15 and organised by UCL’s School of Slavonic and East European Studies (SSEES), Professor Aleks Szczerbiak of the University of Sussex said that for PiS, winning an overall majority was an “incredible achievement”.

One of the main reasons for the PiS victory was the party’s high-profile social spending policies. The party has been able to deliver on policies that many Poles really cared about, such as a generous child benefit scheme, tax cuts, pension increases and raising the minimum wage. Under what PiS leader Jarowsław Kaczyński calls the Polish version of the welfare state, the party has been able to appeal to people’s pocket, and with great success. As Szczerbiak suggests, this “redistribution of prestige” allowed many Poles to feel as if they were not missing out on the current economic success, as finally they had a government which “didn’t treat [PiS voters] as country hicks and a basket of deplorables unlike the urban elites that had come before them.”

It seems that despite the party’s many encounters with political scandal and controversial judicial reforms, the public cut the party some slack in exchange for economic and social benefits. Furthermore, some analysts even suggest that, while far from perfect, their attempt to reform a somewhat broken judiciary system may have won voter support.

Another reason for their success was the weakness of the main opposition parties, notably Civic Coalition (KO). Many analysts, such as Jakub Krupa, the former London correspondent of the Polish Press Agency (PAP) argued that the opposition failed to provide a credible alternative and relied too much on simply not being PiS. This was poignantly illustrated when an opposition MP was unable to name his party’s five-point policy plan live on national radio.

Even when KO did successively make promises, they weren’t necessarily received well. Unlike PiS, when promising social spending reforms, they suffered from a lack of credibility as during their eight years in power before 2015 they arguably failed to implement the same degree of spending as their rivals. It also doesn’t help that the main opposition leader, Grzegorz Schetyna, is not well liked amongst voters. However, the nomination of popular Malgorzata Kidawa-Blonska as KO’s candidate for PM did manage to detract some attention away from Mr Schetyna during the campaign.

And why the opposition lost

However, the opposition did not do terribly. While they weren’t able to grab control in the lower house of parliament, they won a higher than expected 27 per cent of the vote, and more importantly turned the tables in the senate. While PiS took the most seats, 48 seats, it does not have a majority: KO won 43, the Polish Coalition (PSL) three and the Left Alliance (Lewica) two. Independent candidates won four seats.

Notably, PSL experienced a bounce back as a result of clever party rebranding, which picked up more moderate voters and not just those in rural areas, unlike 2015, shifting the balance of power.

Consequently, the opposition will get to nominate the speaker of the senate, giving it a platform to delay or amend legislation and appoint members of investigative committees. These senate results mean that the political forces are rather balanced between the lower house and the senate – a result many Poles may be satisfied with. This balance creates a power check which PiS did not have previously and could cause problems if they try to rush legislation through.

However, if the opposition overplays its hand this could work against them, as striking down legislation and causing political gridlock never plays particularly well with voters.

Nevertheless, it is important to note that just because PiS has lost control of the senate, it does not mean the opposition has gained it. The four independents hold the balance of power and time will tell how this plays out. To maintain a solid hold on power however the government has a lot of work to do, not least as some of the party’s MPs are rumoured to have a fractious relationship with the prime minister, Mateusz Morawiecki. However, for all members of the opposition to come together against PiS in a vote is also unlikely. As a result, many close votes and political gridlock can be expected.

As democratic-watchdog bodies such as Freedom House and the OSCE have noted, PiS benefitted from unbalanced media support in the lead up to the election. Since 2015, state controlled media have shifted their advertising to private media that support the government.

Most notably, Gazeta Polska has become an increasingly vociferous mouthpiece for the party, with its revenue rising 70 per cent in 2016 despite a fall in sales. Moreover, foreign-owned independent media has faced some regulatory pressure from the government and is labelled as foreign interference for its negative coverage of the government’s agenda.

It is unclear the exact role this combined media reach had in swaying voter opinion, but it is undeniable it gave PiS a big advantage. Especially since many Poles mainly watch public state-TV networks. However, this is not to say that the opposition did not experience coverage and support from more centrist and left-leaning media networks; it just was not as mainstream.

Extremism on the rise

In conjunction with the regional political narrative, extremist parties in Poland gained an unexpected amount of support. The far-right Confederation party gained a sizeable 11 seats, up from six in the 2015 elections. The party was able to capitalise on nationalist tendencies with anti-immigrant rhetoric and criticising PiS for not being internationally assertive, particularly in the case of US-Poland relations.

Having a party on the right of PiS could cause it problems, as Confederation is likely to call out PiS for being too conciliatory on issues such as immigration, abortion law and minority rights, potentially scraping off some PiS voters. Their increase in power may also shift the political rhetoric to the right, giving air to opinions that are usually on the periphery of politics in Poland. Confederation’s new found influence could not only compund these issues, but shift the political agenda even further to the right.

A record 62 per cent of Poles turned out to vote in the election, the highest turnout since the fall of communism in 1989. This high level of political participation can be interpreted in a number of ways. Firstly, it highlights the political parties’ success at mobilising voters, and the importance of this consequential election. Secondly, and more importantly, it is telling of the country’s increasing political polarisation, which is often a driving factor of voter mobilisation.

This polarisation is further echoed in the upturn in support for extremist parties. This increased participation is not only clear in voting patterns but in the rise of political demonstrations and rallies. One example that comes to mind is the recent LGBT pride march in Bialystok where protesters were attacked by anti-LGBT counter-protesters, exemplifying the heightened polarisation. As Dr Anna Gwiazda from Kings College London suggests, before 2015 the Poles were passive democrats, but since PiS came to power, they are becoming more and more active.

The political sphere is becoming more polarised, mobilised and extreme. PiS’s turbulent first term has been characterised by scandals, battles with the EU and anti-minority rhetoric. However, they have also enjoyed support from those who have benefited from social spending, a growing economy and popular cultural policies.

The next few years will be crucial in determining the broader direction the country chooses to take. The next thing to look out for is the presidential election next year. While incumbent Andrzej Duda currently enjoys popular support, a lot could change. New candidates will appear and the return of Donald Tusk to frontline Polish politics should not be ruled out. This year’s parliamentary election may well have been merely the warm-up act. More is yet to come. Stay tuned.

In the first round of Romania’s presidential election, second place is what really matters
Digital banking services for corporate business: The Russian perspective
Comment