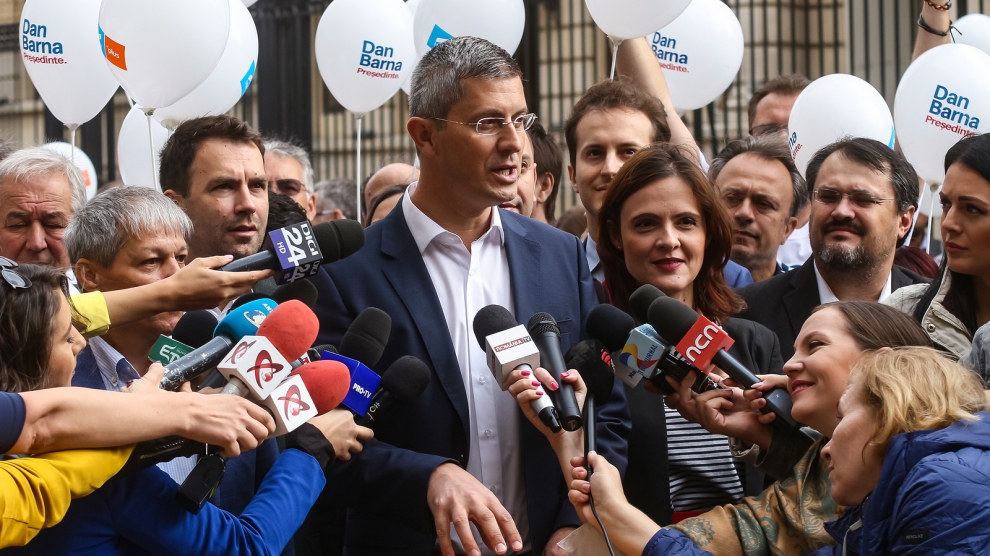 The casual visitor to the Romanian capital Bucharest could be forgiven for being entirely ignorant of the fact that the country is just days away from a presidential election. There are no billboards proclaiming the merits of the various candidates (Romania’s peculiar electoral rules ban political advertising in the run up to an election), and few signs of any electoral combat whatsoever.

There have been no televised debates, and even the country’s political commentariat – which waffles away for hours each night on Romania’s three television news channels – has been far more concerned with the installation of a new government, which finally came about on November 4 when the Liberal party’s Ludovic Orban was confirmed by parliament as the country’s next prime minister.

A safe pair of hands

This lack of enthusiasm ahead of Sunday’s vote can primarily be put down to the fact that the outcome is widely thought to be something of a foregone conclusion. It would be a very brave punter indeed who placed a bet against the current president, Klaus Iohannis, seen as a safe if very slow moving pair of hands, winning a second term in office.

Elected in 2014 despite huge obstacles (he was running against a sitting prime minister, Victor Ponta, whose government attempted to nobble the election, not least by making it difficult for Romanians living abroad to vote), Iohannis has been an adequate president at best. At times he has been an outright disappointment.

Handicapped by a hostile parliament he has been unable to set the country’s political agenda and has been helpless as his powers – already limited – have been cut considerably.

Critics claim that on a number of occasions – when a more combative figure might have fallen on his sword – Mr Iohannis has been far too accommodating towards the largest parliamentary party, the PSD.

He named three PSD prime ministers despite fierce public opposition, and in 2018 agreed – albeit only after a constitutional court ruling forced his hand – to a PSD request to dismiss the popular anti-corruption chief Laura Codruța Kövesi.

For all the disappointments however Mr Iohannis, who cuts an impressive figure on the global stage, retains much popular support.

“I voted for Iohannis in 2014 and I will vote for him again,” says Marta Constantinescu, 28, an agronomist from Cluj in northwestern Romania. “He has been a calming influence who has stopped the country descending into chaos. And when we were on the streets protesting against the government he made it clear that he was on our side. There were times when it felt as though he was all that we had. For that at least, I owe him this vote.”

She is not alone. Opinion polls in these parts are notoriously unreliable, but they are in general agreement that Mr Iohannis, now 60, will win around 40 per cent of the vote and take one of the two spots in the second round on November 24.

The race for second place

That leaves 14 other candidates vying for the second spot in the run-off. Just two have a realistic chance of making it.

The first is Viorica Dăncilă, leader of the erstwhile ruling PSD, who until November 4 was Romania’s prime minister, while the second is Dan Barna (pictured above, centre), the leader of the Save Romania Union (USR). Those same unreliable polls currently give Mrs Dăncilă a small lead over Mr Barna, but they do not take into account the Romanian diaspora, which will heavily back Mr Barna. It should also be noted that the PSD’s electoral machine – which has a notorious ability to get out the party’s core vote by hook or by crook – will not, having seen Mrs Dăncilă replaced as prime minister, be operating at full power.

Uniquely for a presidential election, in the case of both Mrs Dăncilă and Mr Barna, making the second round is arguably more important for their respective parties than for either candidate personally.

For Mrs Dăncilă’s PSD, which for so long has been at the centre of Romanian politics, the failure of its candidate to make the second round of a presidential election for the first time ever could pose existential questions.

The party has already this year suffered a heavy electoral defeat (in May’s European parliamentary elections to the Liberals, who back Mr Iohannis), has seen its Svengali-like former leader Liviu Dragnea imprisoned for corruption, and Mrs Dăncilă’s government lose a no-confidence vote.

Anything less than second place in the presidential vote would complete an unprecedented annus horribilis from which the party might find it difficult to recover.

Mrs Dăncilă herself admitted during a campaign event on November 3 that “if we don’t make the second round, we no longer exist.”

For Mr Barna and the USR however, the stakes are equally high. Missing out on the second round would confirm that the momentum the young party has gained over the past three years – which culminated in it almost beating the PSD into third place in the European election – is beginning to dissipate.

Many erstwhile supporters of the USR are already unhappy with the party not becoming a formal coalition partner of the Liberals in the new Romanian government.

Mr Barna’s leadership style – he has appeared aloof and at times disinterested on the campaign trail, far from the party’s image as an insurgent, radical force – has also been called into question. A highly-publicised media investigation into his business affairs revealed no wrongdoing, but did raise questions over his judgement.

The USR has in recent days been appealing to supporters of Mr Iohannis to vote for Mr Barna in the first round. Doing so, they claim, represents something of a free hit: Iohannis will make the second round regardless, so why not take this opportunity to consign Mrs Dăncilă and the PSD to the dustcart of history?

Certainly, a second round between Mr Iohannis and Mr Barna would represent the first time that Romanian voters have been able to make a positive choice for president.

In all previous presidential election run-offs, Romanians have had to choose the least-worst option (in 2000, when the right-wing extremist Vadim Tudor made the second round, this meant voting for the PSD’s Ion Iliescu).

A second round featuring Mr Iohannis and Mr Barna – both less than charismatic figures – might not be the knockabout contest some political commentators would prefer, but it would mark a new beginning for Romanian politics, and perhaps for the country at large. It would at least make the two men, who have so far avoided even mentioning each other, finally take up arms.

“Iohannis has avoided any kind of conflict with Barna so as not to make him seem important,” says Dan Tăpălăga, a political columnist at G4Media, who suggests that such tactics perhaps betray an underlying fear that Mr Barna could actually defeat the president in the second round.

Mr Barna represents a different kind of challenge. Mr Iohannis would probably need to emerge from his shell, something he is never comfortable doing. It would remain the president’s race to lose, but as he himself proved in 2014, there is no such thing in Romanian politics as a foregone conclusion.