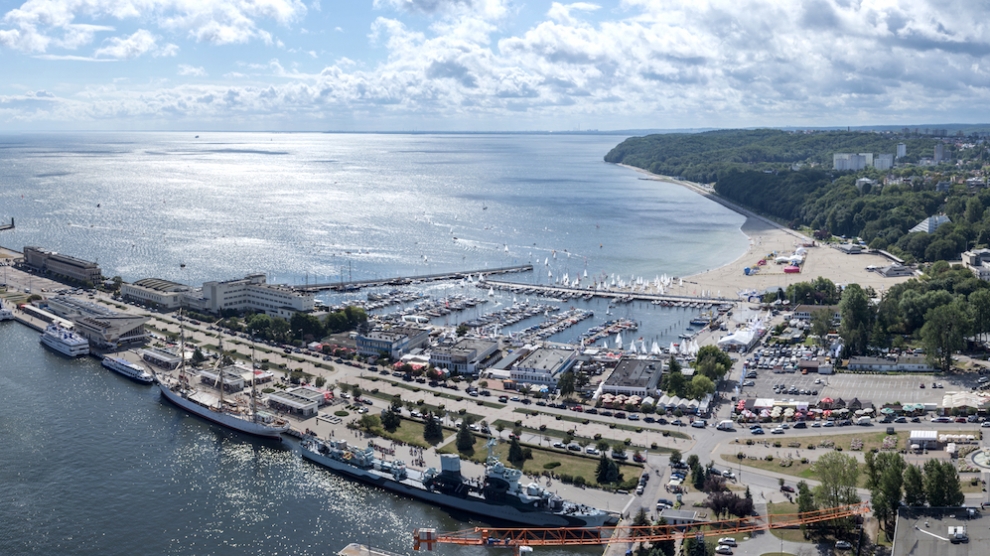 Nine out of ten inhabitants of the city of Gdynia are happy with their lives, according to the latest Social Diagnosis, which measures the objective and subjective quality of life in Poland.

What makes the city the best place to live in the country? Is it the size of the city? Gdynia has a population of about 250,000 and is the 17th largest city in Poland, which means one can reach the office within a quarter of an hour. Perhaps it is the fact that Gdynia is less than 100 years old? In 1926, and eight years after Poland regained independence, the authorities decided to build a large harbour in the only location in the country with access to the sea. Back then, Gdańsk, which comprises the Tricity agglomeration, together with Sopot and Gdynia, was known as the Free City of Danzig.

“Gdynia owes its existence and dynamic development to its strategic location on the map of Poland and Europe, but nature definitely helps us,” says Marcin Chmielecki, head of the Investor Support Division at Gdynia City Hall. “We have plenty of forests and also the highest number of sunny days in Poland with a seaside resort climate. The cultural offerings in the city are very rich. The Open’er Festival, the Volvo Gdynia Sailing Days, the Polish Film Festival, and the European Youth Basketball League, Ironman 70.3 are just a few annual events that take place in Gdynia,” he adds.

Andrzej Boczek, CEO of AB Inwestor, a residential and office developer, sees the city administration’s role in creating the high quality of life. Gdynia is an extraordinary city that was created out of a dream — about the sea; about free access to the world and about prosperity. The city is new and we all are migrants. We are like Americans: entrepreneurial and courageous. We don’t complain. The civil servants here are romantic and pragmatic as well as passionate about what they do,” he tells Emerging Europe.

“This city has this something, I would say, a breath of freshness and it is not only about fresh air or the breeze; there is this fantastic energy that is empowering,” says Adam Pstrągowski, the founder and CEO at S&A, who set up his amber jewellery business 25 years ago as a 19-year-old and who is now a leading amber producer, based in Gdynia.

“Our relationship with local authorities is closer here than in Wrocław, where we have another smaller centre. We work together with the local job centre on various recruitment programmes,” confirms Dariusz Bazeli, CEO at Geoban Poland, a part of Santander Group, which opened a shared services centre in Gdynia in 2008.

“We have a brand new strategy made up of four priorities: the quality of life, home, work and leisure,” says Katarzyna Gruszecka-Spychała, the deputy mayor of Gdynia. “One of the goals is to establish a Sea City district — an area of 20 hectares of an investment area, located at the waterfront, and right next to the city. This is something unique in Europe. In a decade, it will be a very vibrant district with astonishing buildings, and will enable people to reach leisure spaces and the beach within five minutes. We also aim to make Gdynia a smart city. It doesn’t necessarily mean that we need to use very modern technologies. We just want our city to be even more user friendly,” she adds.

In May, 2017, Gdynia received the ISO 37120 certificate — Sustainable development of communities — indicators for city services and quality of life — as the first city in Poland.

“In today’s world improving the standards of life quality is essential. As a city, we have global aspirations, which means that we want to relate ourselves to the best locations. The ISO 37120 certificate is a tool which allows us collect data and confront them with the findings from London, Amsterdam, Barcelona, Los Angeles and Dubai, in an objective and systematic manner,” says Wojciech Szczurek, Mayor of Gdynia.

All of that makes people want to live in the city. “There are even people who were living in Gdańsk or other larger cities in Poland but who decided to move to Gdynia, myself included,” says Magdalena Celmer, regional manager of Randstad, who stresses Gdynia’s quality of life aspect often, when recruiting for job positions in the city. Agata Witczak, director at Thomson Reuters, says her company does the same. They also attract talent by advertising their office as being just three minutes away from a fast intercity train that links the Tricity (SKM) and ten minutes away from the seaside. AB Inwestor’s Mr Boczek concedes that Gdynia still has to catch up with Gdańsk, Poland’s sixth largest city. “This, however, has its advantages. For example, since the construction boom started later in Gdynia, the city has much more modern office space. Investors also need the latest telecommunication technologies solutions and high standards. Gdynia can guarantee that,” he adds.

‘At the moment, the total office space is almost 650,000 m2, which is the fourth largest in Poland, but when it comes to offices, you have to consider the three cities as a whole,” says Marcin Faleńczyk, Regional Head at JLL. If they want to invest in the Tricity and you see an office in Gdynia, then take it; it doesn’t have to be in Gdańsk. To construct an office building is a risk in some cities such as Słupsk or Bydgoszcz because developers don’t know if any company will be interested in it. In Gdynia, the situation is different,” he adds.

Deputy Mayor Gruszecka-Spychała, explains that being so close to Gdańsk is generally an advantage as an investment in the neighbouring city can also create jobs in Gdynia. “The agglomeration is now actually composed of seven cities, so the dynamic is even greater than before, and we have some extra arguments on our side. In Gdynia, we have all the advantages of living in a big city, which what 70 per cent of the population wants. But Gdynia is compact, while Gdańsk is not,” claims the deputy mayor.

Currently, there are nearly 1,000 companies with foreign capital in the city, which makes Gdynia the leader amongst Polish cities with a population between 100,000 and 300,000. Bielsko-Biała, which ranks second, has almost 550 such firms.

Reuters set up in Gdańsk, in 2005, after acquiring EcoWin and a year later expanded to Gdynia, where it runs a financial and risk business centre and now employs some 1,400 people.

It was followed by Sony Pictures, in 2010, which established a financial-accounting centre in Gdynia. Both companies originally wanted to set up in Gdańsk but the lack of office space there encouraged them to move to its sister city, and they are satisfied with this choice. They prove Gdynia is a good location for shared services centres (SSC) and business process outsourcing (BPO). Business services on the up

“We are witnessing some interesting developments in the Polish outsourcing market, not only with a number of very well established cities being universally recognised, now, as mature BPO delivery destinations, but also an increasing number of ‘Tier 2’ cities with a population of less than half a million vying for the spotlight. Gdynia is one of them, boasting the largest Science and Technology Park in Poland, a waterfront that is ripe for development and most importantly, a municipality that is actively listening to both citizens and investors alike, about what they want or need in order for the region to thrive,” Kerry Hallard, president of the Global Sourcing Association (GSA), tells Emerging Europe.

“The Tricity is one of the four top locations for BPO and SSC, if you take into account the total headcount and projects carried out. It is seeing impressive development and I think that the industry will continue to grow at a rate of 15 per cent per annum. The Tricity isn’t just the location for accounting centres anymore. We can also speak about multi-function centres including HR, procurement, master data, and IT services,” explains Randstad’s Ms Celmer.

“ICT also is a fast developing sector. In Gdynia, it mainly operates in the Pomeranian Science and Technology Park, where the Ivona software speech synthesiser, which has been recognised as the best in the world, was created” boasts city hall’s Mr Chmielecki.

“The number of visitors is going up. Poles prefer to go to the Polish seaside rather than to Tunisia or Egypt, because of the instability there, or to France, because of the recent terrorist attacks. At the same time, we also see many Scandinavian and German visitors,” says JLL’s . Local talent is also the future of Gdynia, which is why the City Hall has invested in education, for example, by adding an extra maths class above the national curriculum in primary schools. The Maritime Academy of Gdynia is the city’s largest alma mater with over 5,500 students, but there are other private universities, including a film school, and faculties located in the city, for example, of Gdańsk University. In the Tricity, there are 20 higher education institutions with some 30,000 graduates every year.

Thomson Reuters’ Ms Witczak explains that without the universities’ support, a large-scale recruitment wouldn’t be possible. “All initiatives that help to increase or develop technical and engineering skills are welcome. We see that the extra maths class has already resulted in a higher number of applicants looking at technical and engineering courses at universities. We run a competition, together with the Apps for Good Foundation, with the aim of arousing children’s interest in app creation and technology,” she says.

“Gdynia has low unemployment; only four per cent. In Poland, it reaches 8, 3 per cent and across the Pomerania region — 7, 3 per cent,” says Gdynia’s Mr Chmielecki. Does this mean that it is difficult to find new workers?

“We cannot generalise. It is more difficult, for example, to find IT specialists. But the demographic trends allow us to be optimistic. Also, we are surrounded by Kashubia, where families often as many as seven children. Most of them will come to work in the Tricity,” adds Deputy Mayor Gruszecka-Spychała.

Randstad’s Ms Celmer shares the deputy mayor’s opinion. “Some companies hire 50 people per month without any difficulties, but when looking for specialised skillsets, there can be some challenges,” explains Randstad’s Magdalena Celmer. “I would emphasise the high demand for German language skills as well as data management or analytics expertise, to mention SQL or VBA. she adds.

Getting more talent from abroad is also an alternative. Today, Thomson Reuters employs around 200 foreigners from 40 different countries. “They are mainly from Europe: Ukraine, Spain, Italy, Portugal, Russia and Turkey. Some of them don’t stay very long but even if they decide to go back to their countries after a short time they spread the message among their friends and it has a domino effect,” says Thomson Reuter’s Ms Witczak.

““That is seen in the Tricity’s population which grew by 1,500, in 2016, compared to the previous year. The quality of life definitely plays a major role in that,” concludes Wiktor Doktór, President of the Pro Progressio Foundation.