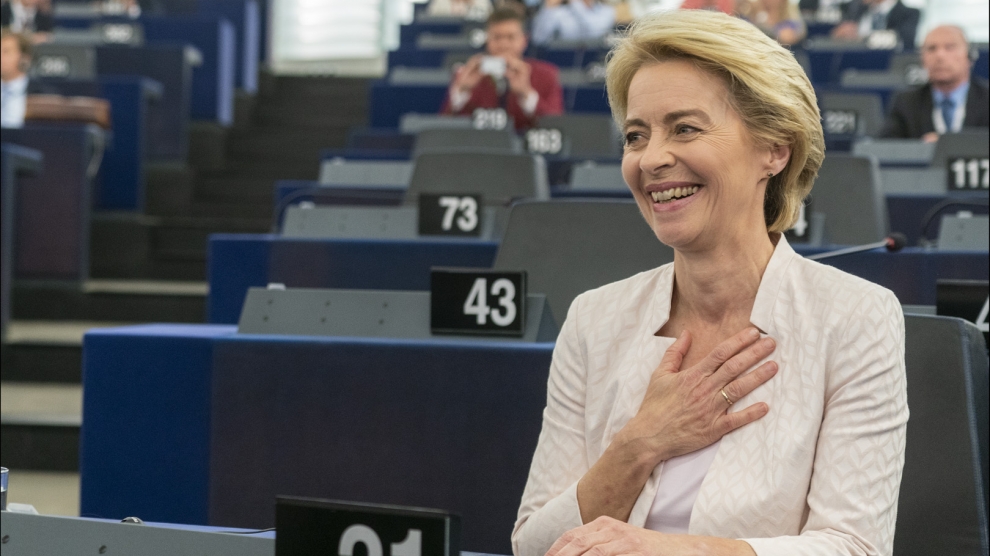 The European Parliament has confirmed Ursula von der Leyen, a close ally of German chancellor Angela Merkel, as president of the next European Commission. The Christian democrat, who will be the commission’s first female president, has outlined a series of proposals very much relevant to Central and Eastern Europe. Nonetheless, implementing her agenda will be highly dependent on political support from the new parliament, as well as the European Council.

Unlike current Commission president Jean-Claude Juncker, von der Leyen was eventually supported by all EU heads of state and government. On the surface, all EU leaders from the region expressed optimism about her nomination, but what does her future presidency really hold for Central and Eastern Europe?

More integration, but at a ‘German pace’

Mrs von der Leyen belongs to the progressive wing of Germany’s Christian Democratic Union party, clearly reflected in her manifesto. While she has been a vocal supporter of the United States of Europe, the federalist integration concept most Central and Eastern European leaders are wary of, the EU is not expected to step on this road in the coming years. Still, those sticking to the concept of a Europe of Nations should keep a close eye on her, as her programme to lead the commission will certainly result in conflicts with certain EU member states of emerging Europe.

Discussing her priorities in the European parliament’s plenary session on July 16, the president-elect mostly focused on introducing a new “burden-sharing mechanism” in migration, strengthening border control, proposing a “Green European Deal” and an EU-wide minimum wage scheme, deepening the Economic and Monetary Union, enhancing the EU’s social pillar, as well as advancing defence cooperation, amongst much else.

This agenda was broadly supported across the parliament, including Poland’s ruling Law and Justice party, the leading force of the eurosceptic European Conservatives and Reformists group and Hungary’s governing Fidesz party, a suspended member of the European People’s Party. MEPs of both parties essentially helped the former German defence minister get elected: she was confirmed by 383 votes, only just passing the 374 she needed for a majority.

Without a doubt, the new burden-sharing mechanism, to replace the EU’s failed attempt to distribute refugees via quota system, will be attacked by the Visegrád countries from the moment they are proposed. Furthermore, the carbon-free goals outlined by the president-elect can also cause trouble with Poland and the Czech Republic whose governments vetoed the EU’s 2050 climate action strategy. Strengthening the social pillar is another initiative Visegrád leaders have spoken out against in the past.

Nonetheless, not all the president-elect’s plans contradict those of Central and Eastern European governments. “I want to reaffirm the European perspective of the Western Balkans and I see an important role in the continued reform process across the region,” she said when addressing EU lawmakers, adding that she stands ready to open accession negotiations with North Macedonia and Albania as soon as the European Council gives its approval. However, the future Commission’s approach to the Western Balkans will be partially overshadowed by the fact that Spanish foreign minister Josep Borrell, the EU’s next high representative for foreign affairs, comes from a country that does not formally recognise Kosovo.

The fact that the future president of the Commission is one of the closest confidants of Angela Merkel might also be a good sign for those opposing federalism. The German government’s stance on the EU has more or less been a slow, but continuous and politically selective move towards a more united Europe, ruling out radical reforms anytime soon.

New instruments to protect the rule of law

Migration is not going to be the only issue where Mrs von der Leyen is expected to clash with Central and Eastern Europe. “There can be no compromise when it comes to respecting the rule of law,” she told MEPs in Strasbourg, adding that the new commission will introduce an additional, EU-wide rule of law mechanism to those which already exist.

With such plans for the next five years, we should ask why emerging Europe’s populists supported Mrs von der Leyen in the first place when she has an even more federalist agenda than Mr Timmermans?

One possible explanation is that from the perspective of political communications, they simply had no other choice. CEE governments had already been offered something when the EU Council killed the candidacies of both Mr Timmermans and Mr Weber. However, the populist leaders of the region were too weak to put forward a candidate of their own. Instead, they decided to go with the flow and hail Mrs von der Leyen’s victory as their own, even if it is not.

For emerging Europe’s illiberals, this will already be seen in the first year of the new commission. Conflicts with the EU surrounding the rule of law could arise as early as September since the new, Finnish presidency in the Council of the EU, which is tasked with driving the European agenda until 2020, has emphasised placing pressure on Hungary and looks set to continue with Article 7 proceedings. This initiative will certainly be endorsed by Charles Michel, Belgium’s outgoing PM and the next president of the European Council, who had previously also slammed Hungary and Poland.

“We are aiming at setting up a well-balanced and effective mechanism that will tie EU funding to compliance with the rule of law,” Finnish prime minister Antti Rinne told reporters on July 17. If successful, this may result in a significant drop in EU funds for Poland and Hungary, which are already projected to receive less support from the EU’s Multiannual Financial Framework between 2021 and 2028.

Furthermore, on July 17, Mr Timmermans, still Commission vice president for justice, introduced the EU body’s newest measures to protect the rule of law which include an annual EU-wide monitoring mechanism and increased funding for civil society initiatives. With a strengthened toolbox, Mrs von der Leyen will be able to keep rule of law debate at the top of the European agenda.

The loss of Central and Eastern European influence has already become visible in the EU. No leaders from the region were nominated for the top five EU positions (EU Commission president, EU Parliament president, EU foreign policy chief, EU Council president and president of the European Central Bank). From the rule of law perspective, another worrying sign for populists could be if Mr Timmermans, who eventually did not end up heading the commission, can keep his justice and legal affairs portfolio and continue his attacks on Jaroslaw Kaczyński and Viktor Orbán over their anti-democratic policies.

Diplomatic sources in Brussels told Politico Europe that the only prominent position Central and Eastern Europeans could get is a Commission vice presidency with a relevant portfolio. While Poland and Hungary are both aiming for that, it is more likely that a Baltic country or Slovakia would receive the politically prestigious title. Furthermore, László Trócsányi, Hungary’s commissioner-designate, will face tough opposition from the parliament and might end up being voted down or remaining without a portfolio.

Opposition to illiberals has also been seen at lower levels: only two out of the five Hungarian ruling party candidates were confirmed for vice-chairs in European parliamentary committees while former Polish PM and current MEP Beata Szydło suffered a humiliating defeat in her bid to become chairperson of the parliament’s employment and social affairs committee. Zdzisław Krasnodębski, another PiS MEP, also failed to be elected as vice president of the parliament. Previously, such opposition has only been a precedent in case of openly extremist lawmakers.

A lot depends on the EU’s actual leaders

How relations between Central European EU member states and the EU institutions will eventually unfold greatly depends the rest of the Commission, the Parliament and — most importantly — the European Council.

Mrs von der Leyen became president-elect because of her many promises made to the Socialist, Liberal and Green groups of the European Parliament. Consequently, any proposal she intends to initiate will depend on what kind of coalition she will be able to build.

While the commission has become rather political over the past few years (it was designed to be a purely executive body), most of the EU’s main powers still lie in the hands of the EU heads of state and government. What the future Commission can initiate will heavily rely on support from the EU Council, especially in case of further integration in the Western Balkans or opening the Schengen borders for Romania and Bulgaria.

The president-elect might have a softer tone towards emerging Europe’s illiberals, saying she is open to dialogue, however, circumstances will not allow her to make compromises, even if this was the case in her parliamentary confirmation vote. Those abusing European values are on course to lose influence and face tougher measures as the EU under Mrs von der Leyen looks set to become stronger.