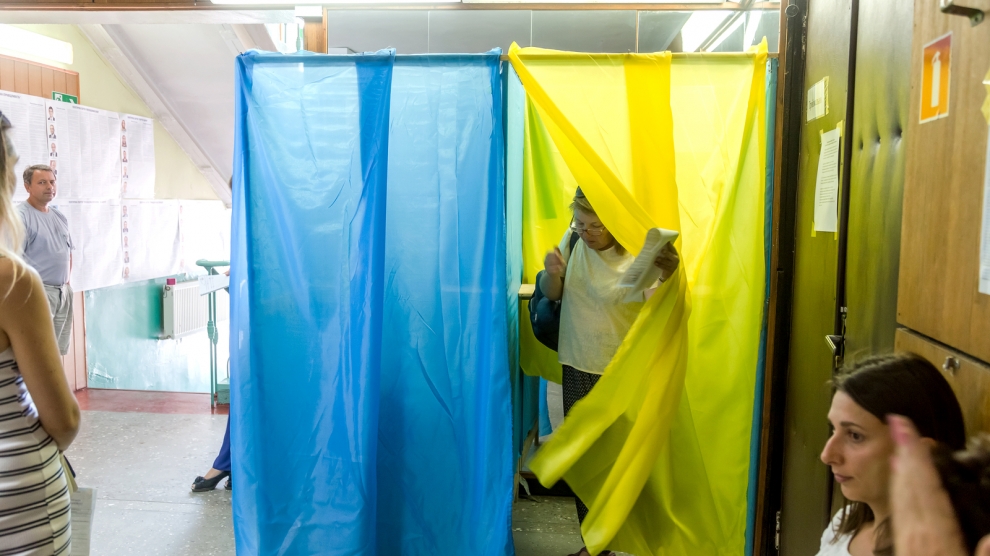 Volodymyr Zelensky's Servant of the People party secured an absolute majority in Ukraine’s snap parliamentary elections on July 21. With the president’s party set to be in charge of both the Ukrainian government and the Verkhovna Rada, the country’s parliament, Mr Zelensky will be expected to deliver much needed reforms.

A massive change is coming to the Ukrainian parliament. The Servant of the People (Sluha Narodu) party received 43.2 per cent of the popular vote in a parliamentary election on July 21, while the pro-Russian Opposition Platform – For Life party came in a distant second with just 13.1 per cent. The Batkivshchyna party of former prime minister Yulia Tymoshenko eventually emerged as the third biggest force with 8.2 per cent, ahead of Petro Poroshenko’s European Solidarity party, which received 8.1 per cent. The newest player in Ukrainian politics, the Voice (Holos) party of rock singer Svyatoslav Vakarchuk ended up being the fifth parliamentary group with 5.8 per cent.

The change is even bigger considering that the president’s party secured 60 per cent of the Rada’s seats due to the Ukrainian election system, the first time a single party has secured an absolute majority since independence in 1991.

1. A strong mandate for reform

Following Mr Zelensky’s landslide victory in the presidential election in April, Sluha Narodu will now take control of the parliament and form the new government. With no need for any coalition partner to maintain majority, the president can now fully push his agenda.

In its manifesto, the Servant of the People party outlined several economic promises, such as modernising the economy, creating “the state of the smartphone”, fighting corruption, encouraging foreign investment, simplifying the business climate and raising living standards, among much else.

The next important step will be to nominate a prime minister with credibility and expertise. “We want this person to be independent and powerful, with a professional background [in economics],” Mr Zelensky told reporters on July 21. An economist PM, who is expected to be named in the coming days, would certainly be a positive sign to Ukraine’s international partners, considering that President Zelensky and many in his team have no governmental experience.

The president has softened his electoral rhetoric about the IMF, and is now stressing that cooperation needs to be continued.

This might be reflected in the choice of the next prime minister. The Ukrainian media reports that Vladyslav Rashkovan, the country’s envoy to the IMF, is one of the top contenders for the job. Other potential candidates surfacing in the Ukrainian media are former economy minister Aivaras Abromavicius, ex-finance minister Oleg Danilyuk and Naftogaz CEO Andriy Kobolyev. However, Oleg Utsenko, an adviser to the president, said on July 24 that “the pool of experts” currently being discussed was much broader.

It will be up to the next PM to secure an agreement with the IMF, one that will be of key importance regarding economic reform. On July 19, deputy governor of the National Bank of Ukraine Dmitry Sologup told reporters the country could agree a six billion US dollars assistance programme as early as the autumn, while Andriy Gerus, a presidential official, confirmed that the talks had already been scheduled for September.

While expectations in Ukraine are generally low when it comes to politics, Mr Zelensky – as a political outsider – managed to revive hopes for change. According to a pre-election survey of the International Republican Institute (IRI), 48 per cent of Ukrainians expect the economic situation to improve over the next 12 months, which is a remarkable increase compared to a similar IRI poll in September 2018, when only 14 per cent held the same view. Simultaneously, the number of Ukrainians who are pessimistic about the country’s future dropped from 71 to 39 per cent. Furthermore, the president’s approval ratings are between 60 and 67 per cent.

Now that the president and his allies are in control of both the legislative and the executive branches, he will have no excuse if he fails to deliver on his promises, says David Nietlispach, a fund manager the Switzerland-based Pala Asset Management.

With such a public mood, timing will be crucial for Ukraine’s new ruling party. Most of Sluha Narodu’s voters did not support the president’s party because of its pro-market agenda, but because they expect the new ruling party to cut utility prices, raise salaries and improve social conditions in general, a campaign adviser to the Holos party told Emerging Europe. If the pro-Zelensky cabinet does not deliver early enough, the new government will be likely to lose support.

The unprecedented mandate, furthermore, bears a significant risk in itself. This is the first time in the history of Ukraine’s young democracy when a party will be able to govern on its own without any coalition partner, meaning that checks and balances will have special importance in the next five years. “Such a situation can jeopardise all the democratic changes we have been implementing so hard. The concentration of power in one person’s hands rarely leads to something constructive [in Ukraine],” Holos sources told us. At this point, it is unknown if the Holos party, which has many similar political goals to the president’s, will enter a coalition.

Another major concern are the ruling party’s potential connections to Ukrainian oligarch Igor Kolomoisky. Close-to-the-oligarch figures such as Andriy Bogdan, who now serves as the president’s chief of staff, are heavily involved in policy-making and running the presidential administration. Ties to the former owner of PrivatBank may cast a shadow over Sluha Narodu’s fight against corruption, an issue many Ukrainians believe should be the top priority of the next parliament.

3.  No turning back on the path towards Europe

Since the 2014 Maidan revolution and the start of the Donbas war, Ukraine has taken a strong geopolitical turn and now aims for full Euro-atlantic integration. The pro-European approach of the Ukrainian people was once again shown in the parliamentary elections: five years after the start of the conflict in the east of the country, close to 75 per cent of the Ukrainian electorate cast their votes for pro-Western parties.

Although Mr Zelensky had not positioned himself as the most pro-EU candidate and the reason for his victory back in April was not the foreign policy course he offered to pursue, he and his party are now fully embracing the European stance of the Ukrainian society.

In the past few months, the president managed to reassure his country’s commitment to EU leaders and negotiating with the United States will be the next challenge for both the president and the new government.

4. A settlement in the Donbas is not likely soon

Based on the developments of the last two months, Mr Zelensky’s strategy for the settlement of the Donbas war is still evolving. While the president is in search of a compromise with the aim of improving the humanitarian situation and reconnecting the Donetsk and Luhansk regions with the rest of Ukraine, his party promised to introduce legislation that would increase the country’s military spending to five per cent from the current 3.4 per cent and reform the armed forces to NATO standards.

While Mr Zelensky will have legislative backing, the next challenge towards the settlement of the crisis will be talks within the so-called Normandy format or with Russia exclusively. The president has expressed his willingness for a compromise, however, now it depends on the Russian side if they intend to engage in real dialogue or not.

What the president and his party can achieve with regards to the crisis will essentially decide Sluha Narodu’s political results: close to half of Ukrainians regard the resolution to the Donbas war as the best way to increase their trust in the Verkhovna Rada.