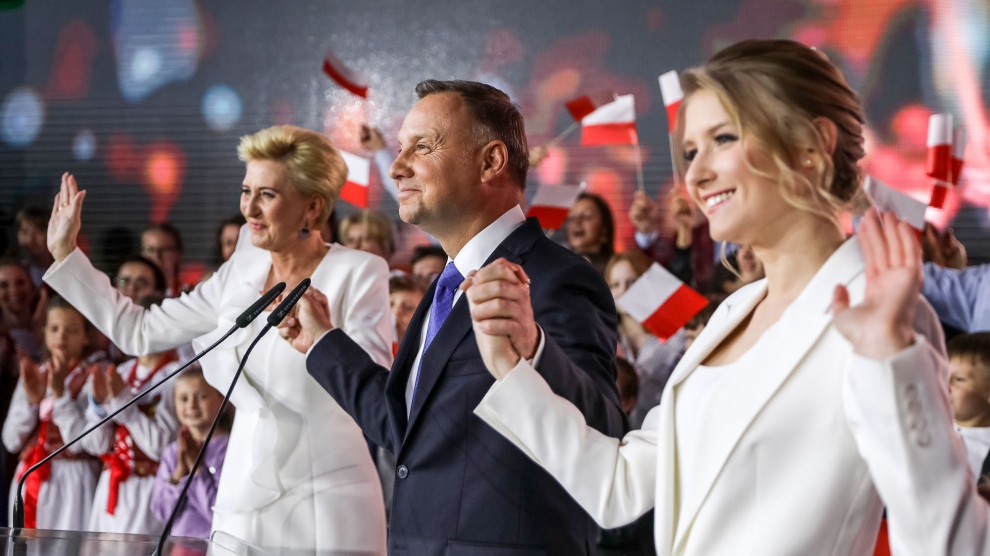 Now that Poland’s divisive presidential election is over, with the incumbent Andrzej Duda, supported by the ruling Law and Justice party (PiS), safely back in Warsaw’s presidential palace, many could be forgiven for believing the whirlwind has subsided. In Polish politics however, the dust rarely stays settled for long.

After a fractious campaign carried out in the midst of a global health pandemic, a change in opposition candidate halfway through the race, numerous scandals, speeches that veered towards discriminatory, Poland came out in record force to vote last weekend, the second highest turnout for any election since the country returned to democracy in 1989: 68 per cent.

This high turnout is symptomatic of such a tight contest, a contest many viewed as crucial for the country’s future direction: conservative or liberal, authoritarian or laissez-faire. Although Poland’s president wields no executive power, he can veto new laws. PiS, which last year lost control of Poland’s Senate, had already been weakened. A victory for Warsaw mayor Rafał Trzaskowski would have severely frustrated its attempts to steer an even more populist course.

Narrowly – the final margin of victory was just 400,000 votes – Poland chose to stick with Mr Duda. Or at least half of it did.

Mr Trzaskowski’s campaign resonated with the other Poland. Urban, younger voters in the west, as well as much of the overseas Polish community.

Mr Duda may have won, but Poland has ultimately lost out to polarisation, with 10 million people now on the wrong side of the political divide. Such a close election has effectively split the country in half, on divergent tracks that ultimately stem from the foundations of the Third Republic. Half the nation is now disenfranchised: the result of such a “winner takes all” fight.

If there is one thing that this election has cemented, it is this bitter polarisation. Marek Migalski, a political scientist, a former PiS MEP but now an open critic of the party, wrote after the result that, “real politics has ended for about two, two and a half years now. It has now been replaced by gang warfare and skirmishes.”

How deep is the chasm between the two sides? According to Aleks Szczerbiak, a professor of politics at Sussex University in the UK, and an expert in the Polish political scene, it’s deeper than ever, a product of the country’s fundamental divisions.

“It goes right down to how Poles view the nature of the post-communist Third Republic and its elites,” he says. “Is it, as some argue, a fundamentally sound, liberal, democratic, prosperous state integrated successfully into western structures? Or, as its critics say, is it founded on a corrupt elite bargain that produced a highly distorted form of capitalism and democracy?”

Professor Szczerbiak warns against characterising PiS voters as, to borrow from Hillary Clinton, a “basket of deplorables”, often divisively labeled by the opposition as backward. Instead, the situation is far more opaque.

Indeed, part of Mr Duda’s success is based on his ability to treat these voters with dignity and respect, rather than dismissal. He was the first president since 1995 to go and visit small rural towns, to appeal to those who count every last grosz, to reassure them that the liberal urban elite would not corrupt their traditional Polish heartland. In this sense Mr Duda “redistributed the prestige”.

In doing so, liberals like Mr Trzaskowski and his Civic Opposition were depicted as extreme. Issues like LGBT-rights and abortion were portrayed as the threatening wrath of western cosmopolitanism. Never mind that Mr Trzaskowski has never formally endorsed gay marriage, supporting civil partnerships instead. Nor has he ever (publicly at least) advocated loosening Poland’s strict abortion laws.

This did not stop Mr Duda from politicising the queer community’s existence for his own electoral gain. Statements that compared LGBT ideology to communism, and a threat to all of Polish society, rallied Mr Duda’s base. And while LGBT rights are not of primary concern for most Poles, such threats are enough to ensure PiS voters place their tick next to Mr Duda’s name when they go to the ballot box, especially when Mr Trzaskowski’s history of modest LGBT support while mayor of Warsaw is distorted as being out of touch with traditional Poland.

Yet, as the old saying goes “its the economy, stupid”, and while PiS’s moral conservatism did help rally the crowd, its economic trifecta: a balanced budget; social spending and welfare; and economic growth; ultimately cut to the core of voter considerations. Particularly when Mr Trzaskowski, despite his slick campaign, was unable to provide a strong economic programme in comparison.

As has been the problem with the Polish opposition for a while, standing on a platform of “not PiS” is not a recipe for success. “Voters need a viable alternative, that isn’t just a return to the status quo,” explains Professor Szczerbiak.

Others have labeled the opposition candidate as too diplomatic.

“Trzaskowski wanted to please everyone,” explains Dr Krystian Dudek, who has assisted several dozen election campaigns. However, this is a symptom of something that runs deeper, right down to the opposition’s lack of political identity.

This is not to say that the opposition did badly, and Mr Trzaskowski personally did very well, not least as he only announced he was running for president a few weeks before the election. Mr Duda on the other had could be said to have performed poorly, taking into account the disproportionate amount of campaign time afforded to him, an openly biased state media, and the rallying effect of a global pandemic.

Civic Platform – the main opposition party – has demanded that the election result be annulled, and will submit a formal request to the supreme court. “I will tell the president straight in the eye: you became the president as a result of an unfair election game,” said its leader Boris Budka.

Marcin Wolny of the Helsinki Foundation for Human Rights tells Emerging Europe that, “during the electoral campaign, we have observed some major irregularities. They concerned inter alia the situation in public media, especially the main TV station which showed each of the president’s campaign meetings and did not show any of his rival’s.”

According to Mr Wolny, as well as other election monitors such as the Organisation for Security and Co-operation in Europe (OSCE), this unfair advantage extends to state resources being channeled into Mr Duda’s campaign, as well as different financial limits on campaign budgets.

The Supreme Court has already received almost 60 complaints regarding a failure to deliver electoral ballots to polling stations abroad, where voters favoured Mr Trzaskowski by three to one. “Tens of thousands of people abroad were deprived of their right to vote,” says Mr Budka.

“We received many signals from Polish citizens abroad who had their voting rights limited or were even deprived of their right to participate in the election. Some of these cases are connected with the Covid-19 epidemic, but others are a result of improper organisation,” explains Mr Wolny.

Unsurprisingly, Mr Duda’s campaign deny these accusations, but while they fall short of systemic electoral fraud, it is clear that there was no level playing field.

It is highly unlikely that any legal challenges will be successful. Mr Trzaskowski, notably, has accepted his loss, and appears set on concentrating his efforts on constructing a more united opposition ahead of parliamentary elections in 2023. Mr Duda meanwhile – who, using his daughter as a messenger, appeared to step back from some of his more extreme campaign statements as soon as the polls has closed – must now decide what kind of second term president he will be.

“In the second term of office, the president is only responsible to God, history and the nation – and this will be the government,” Mr Duda said at the end of his campaign, and there have been some hopes that he may try to cross Poland’s political divide.

Yet as Professor Szczerbiak explains, “as this is his final term Duda doesn’t necessarily have to support the ruling party, but, unless he is prepared to take the risk of trying to build an independent power base, he may have to continue to do so whatever misgivings he may have about particular government policies if he wants a future political career.” Furthermore, Mr Duda has not previously shown any desire to cross the divide, or carve out an independent role. Rather, his demonstrations of initiative in the past have been limited to occasional gestures or disagreements over tactics and speed rather than actually opposing PiS policy.

Professor Rafał Matyja, a political scientist and historian, agrees. “It seems to me that what Andrzej Duda will do is to some extent secondary to what Jarosław Kaczyński will do. Usually, he will submit to the PiS’ chairman’s will. Sometimes he may oppose something, especially if the party shows disregard for it. But he will not come up with his own political agenda.”

Hence, despite Mr Duda’s halfhearted apology to those he may have “offended by actions or words, not only during the campaign, but in the last five years”, it seems that the bridges being built are purely superficial.

Instead, this lack of appetite for depolarisation spells further difficulty for Poland. While the opposition now appears more capable, the currency of bitterness has been established as a recipe for success.

However, the three years until the next election offers all sides a cooling off period and an opportunity for the opposition to restructure and build substance.

Mr Trzaskowski now has a personal mandate of 10 million people, and proof that he is able to unite half the country in opposition to an increasingly illiberal regime. In doing so, the leadership of the opposition is his, if he wants it. Yet some doubt whether he has the staying power for three years of campaigning.

He, at least, would appear to think so. “A very intense period is behind us. These campaign weeks are a time that many of us have hoped for a better Poland. If we managed to mobilise so incredibly for two months, think about how much we can do together over the next months and years”, he wrote on Twitter.

For the opposition, now is the opportunity for rebranding, creative policies, and to mobilise its assets: the privately-owned media, business elites, the EU establishment, mayoral positions, the Senate, even Joe Biden. While the opposition lost the presidential vote, it was a successful loss, and provides it with a platform on which to build.

It will be helped by the thinly-disguised factional discontent between the technocrat (led by the prime minister, Mateusz Morawiecki) and right-wing (led by Jarosław Kaczyński) camps within PiS itself. There are already rumblings that Mr Morawiecki might be pushed aside.

In such a divided country, victory increasingly depends on which political grouping can keep its own divisions away from the public eye. For the past five years, this has overwhelmingly been PiS. Mr Duda is merely the latest beneficiary.