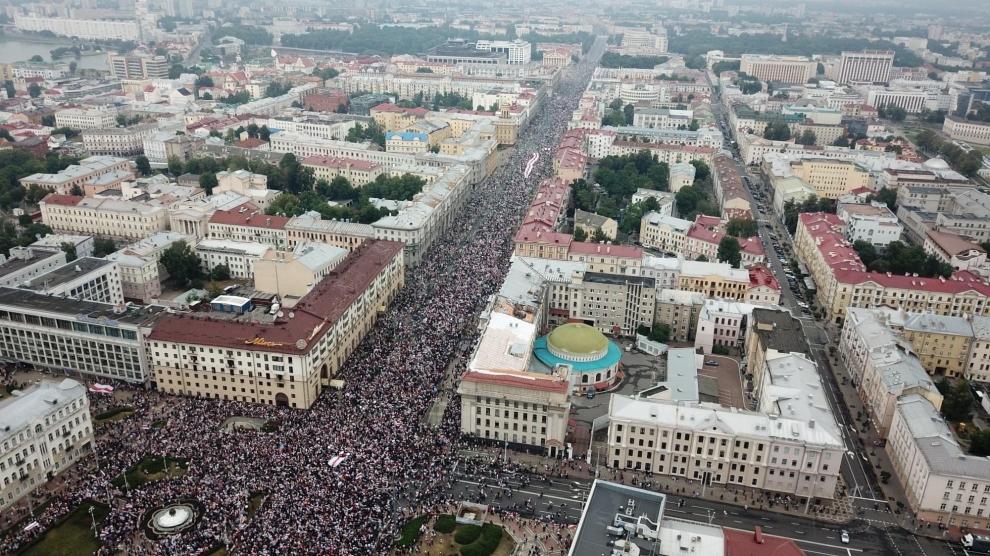 The sight of a helicopter landing in the grounds of the Belarusian presidential residence in Minsk on August 23 prompted many in the city to briefly wonder if Alexander Lukashenko, who has run Belarus since 1994, was about to abandon ship. It quickly emerged however that Mr Lukashenko had been using the helicopter to observe the largest protest yet since a rigged presidential election on August 9 in which he claims to have won an implausible 80 per cent of the vote.

Footage released by Mr Lukashenko’s press team showed the president, wearing a bullet-proof vest and holding an automatic rifle, scanning the protests from inside the helicopter. “They are running away like rats,” he said, as he ordered the pilot to move closer. No ammunition clip was visible on the weapon, suggesting that Mr Lukashenko aimed only to make a show of aggression.

Shortly after landing, he ventured outside the residential complex to thank a cordon of riot police for defending the building. One of the policemen could be heard to say: “We are with you to the end”.

As many as 200,000 people had earlier assembled in Independence Square in central Minsk despite heavy rain and the presence of both riot police and the army, defying suggestions – mainly from Belarusian state TV, now staffed by Russians since its own team walked out on strike last week – that the resolve of the protesters was weakening. A few thousand demonstrators then broke away from the main protest to make their way to the presidential residence, but turned back after being threatened by security forces.

Demonstrations were also held in other Belarusian cities, while in Lithuania, thousands of people – including President Gitanas Nausėda – formed a human chain from the capital Vilnius to the Belarusian border in solidarity with those protesting in Minsk.

The presence of the army – deployed in large numbers for the first time since the protests began – confirms Mr Lukashenko’s determination to cling on to power by any means necessary. On August 21 he hinted at a renewed bout of repression when he warned protesters: “You have Saturday and Sunday to think things through. When Monday comes, don’t take it personally, but a government should govern.”

The country’s defence minister, Viktor Khrenin, took the threat a step further on Sunday when he said he was ready to use troops against protesters.

“I would like to warn you that in case of disturbances you will have to deal with the army, not the police,” he said.

Mr Lukashenko has repeatedly blamed the protests on Western interference, claiming that they are backed by the United States and NATO. He has also accused NATO of moving troops to Poland and Lithuania’s eastern borders, something the the alliance denies.

An opposition coordination council was created last week to develop a strategy for a transition of power from Mr Lukashenko to Svetlana Tikhanovskaya, by any objective measure the winner of the August 9 election who has since been forced into exile in Lithuania, but the authorities in Belarus have instead opened a criminal investigation into the formation of the council.

Mrs Tikhanovskaya is today due to meet with US Deputy Secretary of State Stephen Biegun in Lithuania to discuss a peaceful resolution to the unrest.

The UK meanwhile was yesterday accused of “strengthening and legitimising” Mr Lukashenko’s dictatorship after it emerged that British forces have been providing training to the Belarusian military.

Campaigners said the UK has been helping the “aggressive wing of a deeply repressive and authoritarian sate” by providing training to troops and commanders in the country’s armed forces.

In March, the UK Ministry of Defence announced that British Royal Marines had “shared essential experience and expertise with Belarusian forces” in joint exercises.

“The Belarus armed forces are a very aggressive wing of a deeply repressive and authoritarian state. The brutal scenes that we have seen over recent weeks should concern us all,” said Andrew Smith of Campaign Against Arms Trade.

“The UK should not be doing anything that strengthens the Belarus authorities, and that must include an end to all military training.”

He added: “The images of UK forces in Belarus were shown all over state media. The message this sent to the regime was one of support. The message it sent to pro-democracy campaigners was that their rights don’t matter. Now more than ever, it is vitally important that the UK and other governments stop their hypocrisy and act in support and solidarity to those that are calling for democratic reform.

“When the UK trains with human rights-abusing regimes, it strengthens them and gives them a greater legitimacy. It can only make them more efficient in their repression. We have seen the deadly impact of UK military cooperation in Yemen, where UK-trained Saudi pilots have used UK-made arms to inflict a humanitarian crisis.”