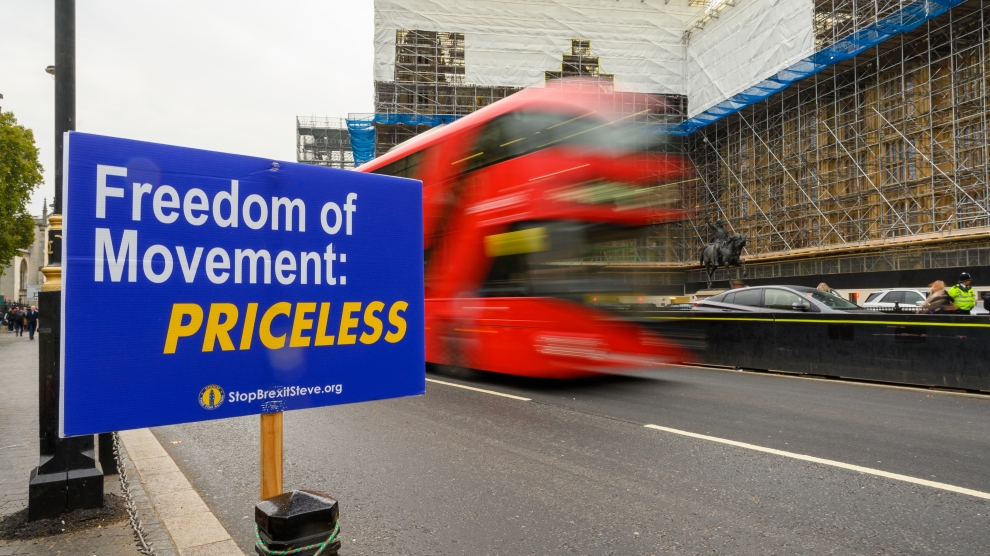 It was not always the happiest or most stress-free of relationships, but Britain and the countries of emerging Europe were for a long time best pals.

It was Britain, after all, which was one of the earliest supporters of enlarging the European Union to the east.

It should also, however, be noted that this was not entirely for altruistic reasons: Britain supported a wider, looser European Union as a counterbalance to the Franco-German push for deeper integration.

In an early episode of the peerless UK comedy series Yes, Minister, Jim Hacker, the fictional minister of administrative affairs, discusses Britain’s relationship with what was then the European Economic Community with his scheming and overbearing permanent secretary, Sir Humphrey Appleby.

Sir Humphrey explains that Britain has had the same foreign policy objective, “for at least the last 500 years: to create a disunited Europe.”

Hacker then asks: “But surely we are committed to the European ideal? If not, why has Britain been pressing for an increase in the membership?”

“Because the more members it has, the more arguments it can stir up, the more futile and impotent it becomes,” Sir Humphrey replies.

As well-intentioned (or otherwise) as the UK’s push for enlargement may have been, as James Ker-Lindsay of the London School of Economics points out in his 2017 paper The UK and EU Expansion in the Western Balkans, such championing of enlargement only makes the UK’s departure all the more remarkable and ironic.

In 2004, when the European Union welcomed the Czech Republic, Estonia, Hungary, Latvia, Lithuania, Poland, Slovakia and Slovenia (as well as Cyprus and Malta) into the club in what was the largest expansion in its history, Britain – along with Denmark – was the only existing member state which fully opened its labour markets to citizens of the new member states.

“Subsequently, it supported the accession of Bulgaria and Romania in 2007, and Croatia’s membership in 2013. At the same time, it was seen to be a powerful advocate of further enlargement. For many years, the United Kingdom stood at the forefront of efforts to promote Turkey’s membership of the bloc. Importantly, it also lent a powerful voice to efforts to encourage the countries of the Western Balkans to join the EU – a position that was also closely related to its efforts to stabilise Bosnia-Herzegovina and Kosovo,” wrote Ker-Lindsay.

Tony Blair, UK prime minister from 1997-2007, was a particularly fierce supporter of enlargement, not least after the Yugoslav wars of 1992-95, and the Kosovo War of 1999. Blair was convinced that only membership of the European Union would bring an end once and for all to the internecine conflicts in the Western Balkans.

A look at events around the Balkans over the past 12 months would suggest that he has been proven to have been at least partially right.

North Macedonia agreed to change its name (and in doing so end three decades of dispute with Greece) precisely because the carrot of EU membership was dangled in front of it. That some members of the EU – France in particular – are now threatening to end North Macedonia’s hopes (at least for the near future) risks giving wind to Macedonian nationalists who would drop North from the country’s new name at a moment’s notice. Likewise, both Serbia and Kosovo are well aware of the fact that the European Union offers both countries a face-saving way out of an impasse that could otherwise go on for decades.

While Britain softened its support for enlargement towards the end of 2013, it did so only slightly.

Then prime minister David Cameron, speaking in Brussels in December of that year, hinted at the new line when he said that, “As we contemplate countries like Serbia and Albania one day joining the EU we must find a way to slow down access to each other’s labour markets until we can be sure this will not cause vast migrations. I look forward to continuing with enlargement but in a way that regains the trust and support of our peoples.”

Some analysts have argued that it was the UK’s support for an eastwards push that enabled Brexit, and that Cameron’s change of approach came too late: that by then, migration was a key issue in the UK, with EU membership widely blamed for the UK government’s perceived loss of control.

This is highly questionable: immigration has never been as big an issue for the British as right-wing politicians would like to think. At the most recent UK general election, in December 2019, less than 20 per cent of voters claimed that it was important.

What’s more, while official pronouncements suggest otherwise, in practice the UK government’s approach to immigration is likely to change very little post-Brexit. Britain needs immigrants, and whatever relationship eventually emerges with the EU, workers will continue to be welcome. Mark my words: free movement will survive, even if it goes by another, very different, name.

What will not survive is Britain’s ability to influence (or hinder) the EU decision-making process. That ends on January 31.

Much to Sir Humphrey’s disdain no doubt, Brexit has brought the European Union together like never before. It has never been so united. The challenges facing Europe – slow growth, eurozone governance, migration, debt, border security and populism – have by no means gone away. Nor has Europe found consensus on how to deal with them. But the steadfast way in which all 27 member countries have approached negotiations with the UK has demonstrated a unison that had been lacking before 2016.

Perhaps the greatest example of this came in October last year when, citing the need for unity, the Polish government – probably, post-Brexit, the most eurosceptic in the bloc – very publicly rebuffed the suggestion of a Conservative MP with Polish roots, Daniel Kawczynski, that Warsaw reject the UK’s request for a short Brexit extension.

Poland’s current government is desperate to reform the EU (or, perhaps, picking up Sir Humphrey Appleby’s mantle, stir up trouble). So are others.

However, like Sir Humphrey they know that the only way to do so is from within. Perhaps Poland will be become the new champion of enlargement?

The countries of the Western Balkans – and the Caucasus – will certainly hope so.