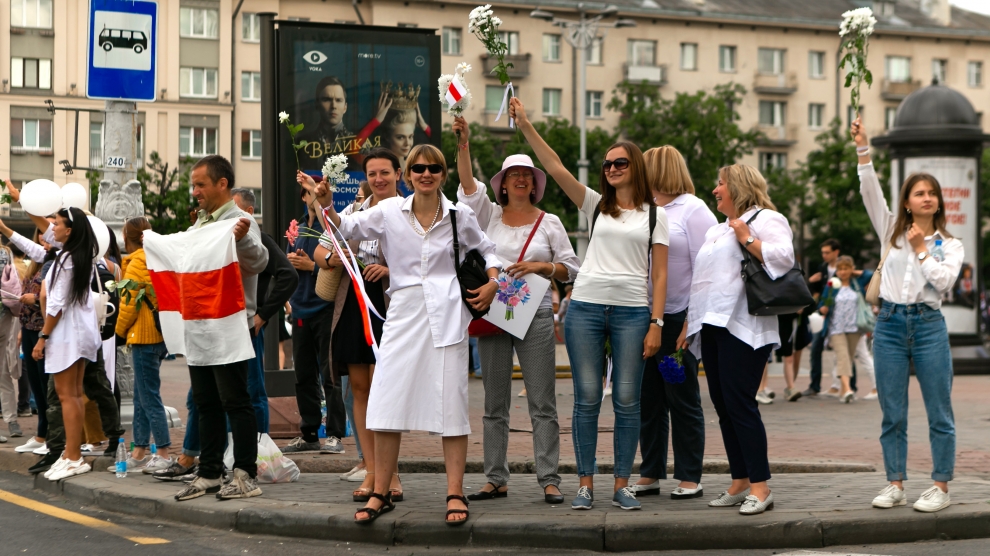 The unfolding human rights crisis in Belarus caused by a vicious crackdown on peaceful protesters demonstrating against a rigged presidential election held on August 9 requires businesses, both foreign and national, to exercise particular diligence when operating in the country and upholding their responsibility to respect human rights, according to human rights group Amnesty International.

The near-total blackout of mobile internet during the first three days of protests in Belarus – widely believed to be the result of government interference with the work of telecom service providers – adversely impacted the rights to freedom of expression, peaceful assembly and people’s ability to freely seek, receive and impart information.

“The terrible events unfolding in Belarus serve as a stark reminder: businesses have a role and direct responsibilities where it comes to human rights,” says Denis Krivosheev, Amnesty International’s acting director for Eastern Europe and Central Asia.

“People in Belarus are facing appalling human rights violations on a scale unseen since the country’s independence. Thousands have been arbitrarily detained, and torture and other ill-treatment have been widespread and severe, and at least four protesters have died. The stakes are high, and business enterprises have to be aware of their responsibility to respect human rights. They must take pro-active steps to ensure that they do not cause or contribute to human rights abuses.

“As the authorities in Belarus demonstrate complete disregard for human rights, they may place demands on businesses that would clearly lead to human rights violations. Should this be the case, business enterprises need to make their opposition to the required decisions known to the government and to the public, and pursue all legal options to challenge it.”

Last week, CEOs, investors and developers from 500 leading Belarusian IT companies signed an open letter demanding a new election, an end to police violence and the release of political prisoners, stating that they would otherwise be forced to take their businesses out of the country.

Doing so would be highly embarrassing for Alexander Lukashenko, the country’s dictator who implausibly claims to have won the August 9 election with more than 80 per cent of the vote, who has made a great show of taking personal credit for the country’s emergence as an IT hub.

Sergei Levteev, the CEO of IBA Group, an IT service provider, tells Emerging Europe that while of his colleagues arrested in the initial repression of protests last week have now been released, “all have injuries, such as bone fractures, internal injuries, hematomas, and abrasions, not to mention the deep psychological trauma they suffered. They are not bandits, not criminals. They are the flower and hope of Belarus, highly educated and hardworking professionals. They just wanted to be heard.”

He added that the company will give assistance to all of its injured staff. “I hope that they will soon recover and return to our team, and the nightmare they have experienced will remain in the past,” adds Mr Levteev.

He also added his voice to other business leaders who have warned that without change, many talented Belarusians might see their future abroad.

“Many people have stopped believing that there can be justice in Belarus. More and more people see their future outside their country. It would be a terrible outcome. But I really hope that this will not happen.”

Meanwhile, prosecutors in Belarus have accused the country’s opposition of trying to illegally seize power and have opened a criminal case against them, as protests against the regime Mr Lukashenko continue.

The announcement raises the possibility of trials and jail time for the leaders of a coordination council, set up this week, that includes opposition politicians, factory representatives and the Nobel prize-winning author Svetlana Alexievich.

The council held its first meeting on Wednesday and called for fresh elections and negotiations with authorities, but Lukashenko has dismissed its demands as a western-backed “coup”.

“The creation and the activities of the coordination council are aimed at seizing power and inflicting damage to national security,” said the prosecutor general, Alexander Konyuk, on Thursday. He said investigators had started a investigation into “calls for actions aimed at undermining national security”, which carries a jail term of up to five years.

Pavel Latushko, a former culture minister who has emerged as the unofficial leader of the council, said he had been threatened repeatedly in recent days and “strongly advised” to leave the country.

Svetlana Tikhanovskaya, who by objective measures won the August 9 election, urged her supporters this morning to step up their strikes despite “intimidation” from the authorities.

In a new video address from exile in Lithuania, she said: “I ask you, continue and expand strikes… don’t be fooled by intimidation.”

While many state-owned companies in Belarus have joined the strikes, the number of workers who have actually downed tools is said to be falling as a result of the high level of intimidation to which they are being subjected by their bosses. Earlier this week, one Belarusian analyst told Emerging Europe that “strikes have the potential to have a much bigger effect on changing perceptions among the ruling elite than the protests themselves.”

The opposition is now planning a fresh wave of protests for the weekend. Last Sunday a huge demonstration of several hundred thousand people galvanised those opposed to Mr Lukashenko. A new rally is planned for August 23, which organisers hope will be even bigger, despite the renewed threat of a violent crackdown from the security forces who remain loyal to Mr Lukashenko. It will preceded on Saturday by a women’s march: women, mainly dressed in white and holding flowers, have become one of the symbols of the Belarus revolution, and last week played a major role in reducing the level of violence used by the security forces.