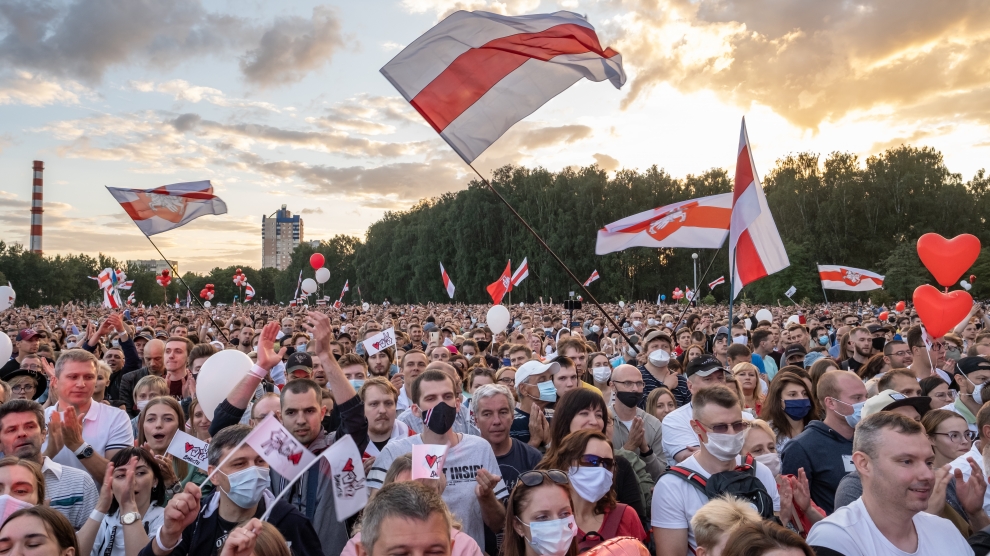 Unmoved by the largest protests in the history of independent Belarus, the country’s dictator Alexander Lukashenko refuses to budge. Still supported by a majority within the security services, both regular police and special forces, Lukashenko appears to have in recent days abandoned outright repression of protests which began on August 9 after a rigged presidential election and is digging in for the long haul, hopeful that both the protests and accompanying strikes will dissipate over time.

Not that Lukashenko has ended his repression of the country’s opposition movement entirely. Many people remain in illegal detention (although the country’s interior ministry claims the number is an implausibly low 44) and at least 76 people have officially been declared as missing. Random arrests – though on a far smaller scale than during the first days of the burgeoning revolution – continue, as does the torture of detainees.

“This is a process, and it has not yet been completed,” says Alex Kokcharov, a Belarusian political risk analyst. “On the one hand we have an unprecedented scale of protest but on the other we have the very clear intent of Lukashenko to remain in power. I do not think this situation will have an immediate conclusion. It could take weeks, perhaps even months. It is certainly too early to claim that this is a successful revolution and that Lukashenko will be ousted. His popularity has clearly been dented among the general public, including his core constituencies, but he still controls much of the state apparatus. We have seen some cracks, such as the resignation of the ambassador to Slovakia, but we have not reached the point of no return. It is 50/50 if he stays or goes.”

Amongst those still imprisoned is YouTuber Sergei Tikhanovsky, the husband of Svetlana Tikhanovskaya, by any objective measure the clear winner of the presidential election on August 9. Mrs Tikhanovskaya is currently in exile in Lithuania, from where she has sent several messages in support of the protests and has overseen the creation of a national council that she hopes will be able to negotiate a handover of power.

Nobel laureate Svetlana Alexievich, human rights defender Ales Bialacki, activist Pavel Belavus, and dozens of others have been co-opted onto the council, which also includes representatives from workers’ committees at large, state-owned companies.

It looked very much last night however, at its first public meeting, that former Minister of Culture Pavel Latushka, most recently the director of the prestigious Kupala Theatre until being fired last week for supporting the protests, had assumed at least an informal role as head of the council’s coordination committee.

Speaking at the meeting alongside Maria Kalesnikava, who ran Tikhanovskaya’s election campaign, Mr Latushko said that he saw both the EU and Russia as possible mediators in dialogue between state and society in Belarus, mediators who could “work out instruments for a peaceful transition of power”.

“We are tired of seeing enemies on both sides – we want to have good relations with all our neighbours,” he said, before adding that “the country is being ruled by the KGB and the security forces. We are not the opposition, we are the majority.”

Alex Kokcharov believes that the council could provide a boost to protesters.

“The council institutionalises the protest and creates alternative power structures to which those people who are unhappy with Lukashenko can flock,” he tells Emerging Europe. “This will potentially increase the number of defections, whether it’s government officials, economic leaders – such as the bosses of state-run factories – or servicemen within the security forces. Again, however, while the council certainly weakens Lukashenko’s position, it does not mean that he is done and is about to resign.”

Recognition of the council as the legitimate government of Belarus may now follow, at least from some European Union countries, notably Lithuania whose foreign minister has already hinted at such a course of action.

However, Mr Kokcharov believes that regardless of how many European Union countries recognise Tikhanovskaya, Lukashenko will remain in place for as long as Russia remains onside.

“If we look at the economic relationship Belarus has with Russia, and compare that to its relationship with the European Union, Russian recognition is paramount. [Vladimir] Putin is the kingmaker, he can decide who will be the next leader of Belarus,” he says, adding that so far, Russia’s position has been “inconclusive”.

“Putin congratulated Lukashenko immediately after he declared victory but the coverage of the protests in the Russian media, even on state-run television, has generally been even-handed. What Russia is doing is buying time to see which way events go, calculating which outcome will be most favourable to its own interests. I am fairly certain that the Russians are talking to both sides, establishing lines of communication with the opposition, making sure that they understand Belarus is tied to Russia economically and militarily.”

As things stand, Lukashenko shows no signs of being ready to hand power over to anyone. In a short speech to workers at a factory on August 17 – during which he was visibly shaken when heckled – he said that he would not give Belarus away, “while I am alive”.

Although he has suggested that he would be ready to hold new elections and possibly even step down “after a constitutional referendum”, he insists that this could not happen “while he was under pressure from protesters”.

Other autocratic leaders across the former Soviet Union have tried similar moves, offering the pretence of formal democratic accountability while holding on to power informally (and keeping their immunity from prosecution). When Serzh Sargsyan tried it in Armenia in 2018 however, he was swiftly removed from power in a revolution.

Nevertheless, Mr Lukashenko does appear rattled by the creation of Tikhanovskaya’s council. He last night called it a “coup d’etat attempt” and promised to take “adequate measures” against those involved, whom he labelled as “offended former officials and Nazis”.

With the council now in place, one of its first tasks will be to galvanise striking workers, not least as strikes might now be the most potent weapon of those seeking to bring about democratic change in Belarus.

“Strikes have the potential to have a much bigger effect on changing perceptions among the ruling elite than the protests themselves, as they will have a direct impact on the economic well-being of the elite,” says Alex Kokcharov. “The directors of striking enterprises know that they will probably be replaced by Lukashenko if the strikes continue, and as such the strikes will make them question their loyalty to his regime.”

As for the direct impact of strikes on the economy, this may not be as deep as some observers believe. The way that the Belarusian economy is run means that significant numbers of state-owned enterprises have vast quantities of unsold inventory – many months’ worth in some cases – ready to be shipped, meaning that strikes will not immediately affect their cash flow.

“It could take some time for any halt in production to be felt,” says Kokcharov, who adds that the situation differs, however, from sector to sector.

“Commodity manufacturers, such as Grodno Azot, which makes fertilisers, and the oil refineries, do not have the capacity to keep large quantities to hand. Here, the effects could be more immediate.”

Meanwhile, a new website, probono.by, has been set up to connect those who were tortured in detention with lawyers and psychologists willing to help, as well as sharing registries of those who were detained. Mr Lukashenko has responded by handing awards “for impeccable service” to around 300 law enforcement officials who helped him crack down on protesters.