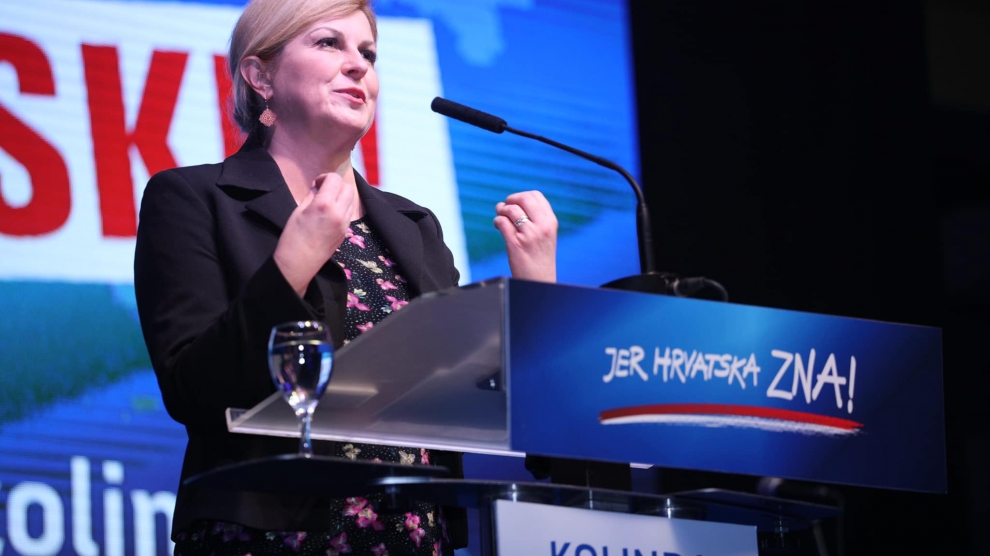 On January 1, the country assumes the rotating presidency of the Council of the European Union, while on January 5 Croatians head for the polls in the second round of a presidential election, in which the incumbent, Kolinda Grabar-Kitarović (pictured above), is expected to win a second term in office.

There are concerns however that Mrs Grabar-Kitarović’s recent swing to the right – in order to shore up support amongst nationalist Croats – does not augur well for the country’s presidency of the EU Council.

Having run a disastrous campaign ahead of the first round of voting shortly before Christmas, Mrs Grabar-Kitarović saw a big lead in the polls overturned by her rival, the former prime minister Zoran Milanović, a social-democrat, who won the first round with 29 per cent of the vote.

To ensure a second term in office, Mrs Grabar-Kitarović needs the votes of supporters of the far-right Miroslav Škoro, who came third in the first round of voting.

She has called on Croatians to unite around what she terms “common values”, while Mr Milanović has concentrated on attacking her record in office.

“We rank last amongst European countries in the use of available EU funds,” he said last week. “We currently live in a time of minimal economic growth.”

While Croatia’s recovery from the global economic crisis of a decade ago has been impressive, the country has not fully diversified its sources of growth, relying heavily on tourism, which is vulnerable to the external environment.

An aging population and increasing levels of outwards migration are also key problems that the current government of Andrej Plenković, an ally of Mrs Grabar-Kitarović, has yet to fully deal with.

In a recent update on the country’s progress, the World Bank warned that Croatia’s prospective growth rate of roughly 2.5 per cent over the medium term is “not enough” to reignite, much less accelerate, the pace of convergence with other countries in the EU.

“With the right set of policy actions, Croatia can increase returns on public investment—by effectively using EU grant funds in the current and upcoming EU financing period—and attract strategic private investment to create economic opportunities. With the accession to the Euro Area as part of its medium-term agenda, Croatia is planning to implement ambitious reforms to boost growth, build economic resilience, and maximize the benefits of Euro Area membership. Critical reform areas include investments in human capital and natural resource management to preserve and leverage the country’s natural assets. However, the success of these reforms will ultimately rely on strengthening Croatia’s institutions,” wrote the World Bank in October.

Croatia has made some progress in its fight against corruption, demonstrated most recently in a court ruling on December 30 which found the country’s former prime minister Ivo Sanader guilty of accepting a bribe of 10 million euros in order to give Hungarian conglomerate Mol controlling rights over Croatian energy company INA.

Mr Sanader was sentenced to six years in prison, and former Mol CEO Zsolt Hernadi sentenced to two years. However, the rulings — the result of a retrial — can be appealed.

When it comes to the presidency of the Council of the European Union, the stakes could not be higher.

Croatian ministers will set the agenda and moderate meetings with their European counterparts, and will oversee both Brexit – now expected to happen on January 31, as well as negotiations on the European Union’s multi-annual budget for 2021-2027.

The Croatian presidency will also advocate launching accession talks with Albania and North Macedonia, both candidate countries, as well as granting Bosnia and Herzegovina the status of a candidate country.

Croatia will also seek support for its accession to the Schengen area. In late October the European Commission assessed that Croatia had met the necessary criteria, but the final decision rests with other Schengen members.

However, the country has been heavily criticised in recent months for its treatment of migrants. In November, a migrant was shot and injured by Croatian police as he attempted to reach the country’s border with Slovenia.

“The European Commission’s conclusion that Croatia is ready to join the Schengen area willfully brushes over evidence of violent pushbacks of migrants at its borders,” the NGO Human Rights Watch stated in November.

Lydia Gall, senior Eastern Europe and Balkans researcher at Human Rights Watch said that Croatia’s unlawful and violent summary returns of asylum seekers and migrants should disqualify it from joining the Schengen area.

“Ignoring Croatia’s abuses of migrants at its borders makes the notion that Schengen membership is contingent on respect for human rights just meaningless talk,” she said.

A president re-elected with the support of the country’s far-right is unlikely to ease the concerns of human rights groups.

Meanwhile, it remains to be seen if the attention the EU presidency will bring will allow the bloc to continue to turn a blind eye to Croatia’s overzealous policing of its borders.