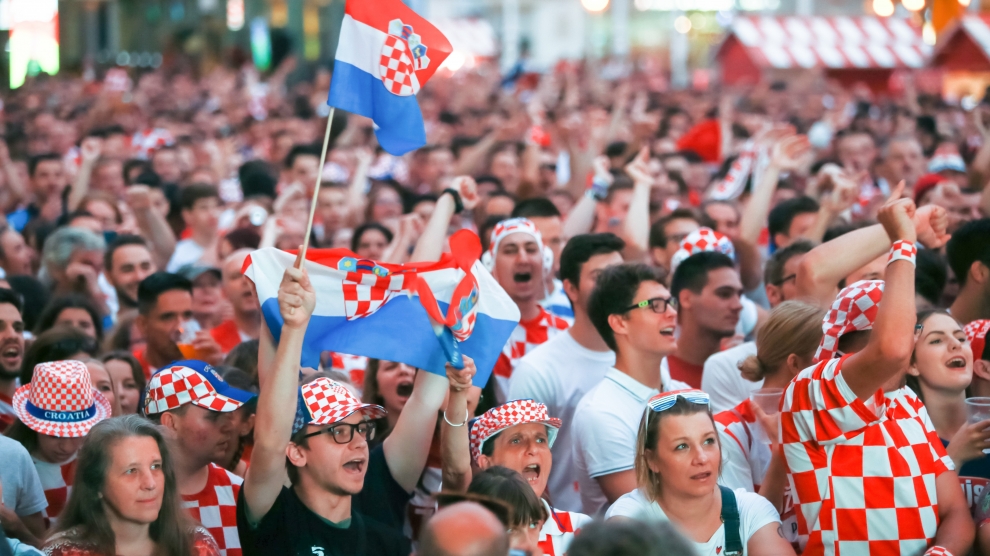 With the remarkable sight of rain-soaked Croatian President Kolinda Grabar-Kitarović consoling her team after the World Cup final in Moscow still fresh in the memory, it comes as something of a surprise to discover that all is far from well with Croatian football.

The current predicament of Luka Modrić, Croatia‘s team captain and catalyst, one of the World Cup‘s star performers and a player whose reserves of energy appear boundless, highlights the problems Croatian football is currently facing.

Back in March, Modrić was charged by the Croatian authorities with perjury. Prosecutors say Mr Modrić, now 32, made a false statement in June 2017 over details of his transfer from Dinamo Zagreb to English club Tottenham Hotspur in 2008. A focal point of the Real Madrid team which has now won three successive Champions League trophies, Modrić may well avoid prison if found guilty, but a suspended sentence is a real possibility.

The team the war destroyed

Amid the carnage of Sarajevo, the siege of Dubrovnik or the genocide at Srebrenica, it is no surprise that the story of Yugoslav football in the early 1990s should have been all but forgotten. And yet as war broke out in the early summer of 1992, Yugoslav football was about to reach its peak. Featuring the bulk of the stylish Crvena Zvezda (Red Star) Belgrade side that had won the European Cup the previous year, Yugoslavia were expected to do very well in that year’s European Championships, in Sweden. Many pundits tipped them to win.

And yet with Serb shells falling on Zagreb the Yugoslav team – made up almost exclusively of Serbs and Croats – was at the last moment forced to pull out. Denmark took Yugoslavia’s place, and won the tournament.

As Yugoslavia broke up into separate entities, it was football in Croatia which recovered first. The country’s national team qualified for the 1996 European Championships and performed well, reaching the quarter-finals. At the World Cup in France two years later Croatia finished third, the best performance of any post-Yugoslav team until this summer.

There then followed a period of far more modest outings: knocked out in the group stages of both the 2002 and 2006 World Cups, Croatia failed to even qualify for the 2010 tournament. They returned in 2014, but were again one of the first teams to be eliminated.

Croatia made the headlines at the 2016 European Championship, although not as they would have wished. During a group game against the Czech Republic in Saint-Etienne, fans protesting against the Croatian football association threw flares onto the pitch which landed just a few metres away from Czech goalkeeper Petr Cech. At least 15 were thrown in total before a small group of Croatia fans ran on to the pitch and attacked their own players.

Such scenes were absent in Russia. But as Aleksandar Holiga, editor of Telesport Croatia tells Emerging Europe, that was not because the team was doing well.

“Being arrested in Russia is a much worse experience than in France,” he says. “Also, the momentum for such protests may not have been the same this summer — not because the team was doing well, but because some small changes have started happening in the domestic game, or at least that’s the impression most people have.”

“The World Cup success is an interesting thing in a lot of ways,” says John Bills, a journalist and author of The Illustrated Guide to Slavic Misery. “It masks the mess but it has also brought plenty of mess to the fore: the team singing with Thompson, for example.”

Marko Perkovic, known by the stage name Thompson, is a nationalist who has sung for war crimes defendants. He partied with the Croatian team on their homecoming bus and was invited to sing during celebrations of their World Cup success. His repertoire includes songs about Jasenovac and Gradiska Stara, two concentration camps run by Croatia‘s fascist Ustasa regime during the second world war.

It left a nasty taste in the mouth, and is a long way from Mrs Grabar-Kitarović’s innocent, soaked antics, but does rather highlight what Mr Bills says: the Croatian domestic game is a mess, and unloveable.

“The first round of league games of the new season took place at the end of July, and the lowest attendance was a paltry 360 at Lokomotiva,“ Mr Bills tells Emerging Europe. “You’ll get big crowds for Hajduk Split against Dinamo, but many other games are likely to drag in a couple of hundred at best. Fairly normal for the region, unfortunately.”

Again, he is right: all over emerging Europe the lure of higher salaries elsewhere (often in far-flung places, not least China) has left domestic leagues bereft of talent, with games played in front of small crowds. Only television money, and transfer fees, keep the game alive.

It is those transfer fees which have created problems for Luka Modrić.

Modrić is accused of making false statements at the tax fraud trial of Zdravko Mamić, a former executive director at Dinamo Zagreb. Mr Mamić, a powerful figure in Croatian football, was a senior official at Dinamo when Modrić played for the club, the most successful in the Croatian league. Cash is said to have been embezzled via deals where Mr Mamić, his brother Zoran and two others took a cut from the sales of players.

In June, Mr Mamić was found guilty by a court in Osijek. The court ruled that Modrić, and another member of the current Croatian team, Dejan Lovren, were unlawfully paid 50 per cent of the transfer fees that Dinamo received from Tottenham Hotspur and Lyon respectively, only to pass on most of that money to Mr Mamić, who was sentenced to six-and-half years in prison.

Modrić now faces a separate trial, for which no date has yet been set. A very similar case in Romania, in which the real value of transfer fees was hidden from the Romanian tax authorities, saw a number of leading football administrators, as well as former national team captain Gheorghe Popescu, sentenced to prison in 2014. Popescu ended up serving almost 20 months in jail.

Wasim Ahmed, assistant professor in digital business at the Northumbria University, Newcastle, has taken a look at how social media users tweet about Croatia, as well as the fact that web searches are what he terms: “through the roof.”

“Towards the end of final against France, more than a million tweets had been sent out that included the word Croatia, says Mr Ahmed. “A country would usually have to spend millions if they wanted to gain this type of interest. This itself is a very rewarding aspect of progression in the tournament as it equates to massive free exposure for a nation,” adds Mr Ahmed.

The economy has also seen a boost. The Croatian Chamber of Commerce announced shortly after the tournament that local economic activity increased by 9 billion kunas (1.2 billion euros) year-on-year, with expenditure on snacks and alcoholic beverages jumping by 10 per cent year on year.

The biggest winner, however, has probably been Mrs Grabar-Kitarović, a former Fulbright scholar, Croatian ambassador to the US, and assistant secretary to NATO. Though largely a figurehead president, she is keen to be re-elected next year and her appearances at the World Cup would have done little to harm her chances.

“Consoling a losing soccer team is it the most challenging part of Grabar-Kitarović’s job,” said Corinne Purtill at the World Economic Forum. “But projecting a sense of unity and unwavering commitment is a necessary and important part of the job.” It remains to be seen if Mrs Grabar-Kitarović will console Luka Modrić quite so publicly should he be convicted of perjury.

We also need to wait and see if Croatian football will reap its own World Cup dividend.

“In the long run, I don’t think this success will mean that much,” says Aleksandar Toliga. “What it has done is stir things up a bit and attract more interest in domestic football, including among the political elites. Unfortunately, very few things in Croatia can be done without the involvement of politics — and politics has been involved in running football since forever.

“The mess can’t stay hidden anymore though. I’m not optimistic enough to say things will get better soon, but I don’t think they can get much worse than they already are.”