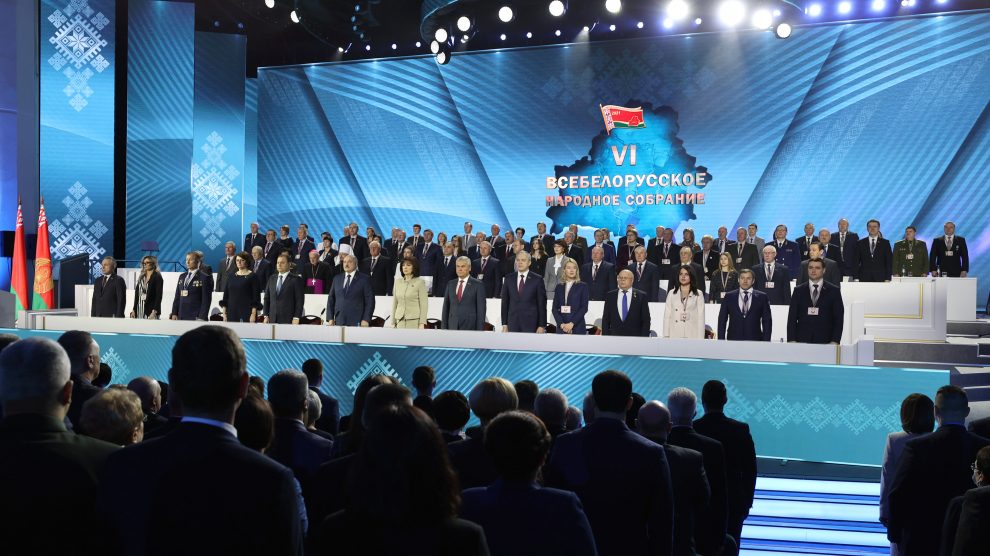 The All-Belarusian People’s Assembly was convened as a show of support for the country’s president, Alexander Lukashenko. It served only to demonstrate his weakness, and continued reliance on Russia.

There was a strong Soviet vibe at the All-Belarusian People’s Assembly held in Minsk on February 11 and 12, where 2,700 carefully chosen delegates – mostly government officials, and the heads of state-owned enterprises and institutions – gathered to hear the country’s president, Alexander Lukashenko, lay out his plans for the next five years.

There were empty slogans, such as “Unity! Development! Independence!”, prolonged periods of applause for the president, five-year plans, and even quotes from Lenin. Very little actual policy was announced, even less was decided, beyond a commitment to create a commission that will examine the possibility of constitutional reform.

The suggestions Mr Lukashenko put forward in September of last year, at the height of the protests against him that followed a disputed presidential election in August, to quickly put in place a new constitution and hold a new election, were forgotten.

Mr Lukashenko first convened the All-Belarusian People’s Assembly as a “vector of popular opinion” in 1996, two years after he became the country’s president. It has been held every five years since, each assembly as carefully staged-managed as the last. It should not be confused with the country’s 174-seat parliament, the National Assembly, although it is equally impotent.

‘A test of endurance’

Comparisons instead centre on its resemblance to a Soviet-era Communist party congress, where the general secretary would report on the past five years and offer clues for the party’s course for the next five. Mr Lukashenko, however, who has always claimed to be above the petty notion of politics, has no party, and on paper at least no obvious power base.

In reality, the president retains the support of the country’s military and security services, who have made over 35,000 arrests since protests against him began. The management, if not the workers, of state-owned companies continue to back him, although more – it is suspected – out of fear for their personal well-being than genuine support.

In front of the slogan “Belarus: A test of endurance”, Mr Lukashenko used his keynote speech as an opportunity to reassure delegates that his position – and by association theirs – was secure.

Dismissing the protests as “foreign intervention”, he said that they had been overcome.

He also thanked Russia, whose assistance had been “of the utmost importance”.

“As long as we and Russia stand back to back, no one will bring us to our knees.”

While he acknowledged that his office had “too much power”, he also said he would only step down after there was “peace and order in the country”.

‘A meeting of the nomenclature’

Svetlana Tikhanovskaya, who by any objective measure defeated Mr Lukashenko in last year’s election (the president instead declared himself the winner with an implausible 80 per cent of the vote) was unimpressed with the Soviet-era spectacle.

“Over the last two days, all of our fears have come true. Lukashenko showed what Belarus would be like with him. This is a terrible crisis. Total isolation. The collapse of the economy. And, as a result, a threat to sovereignty. Did this meeting of the nomenclature solve any of our problems? No, no,” she said.

Mrs Tikhanovskaya continues to operate from exile in Vilnius, Lithuania. Many of her allies who remained in Belarus face trial and long prison sentences, including her husband, Sergei Tikhanovsky, a YouTuber. This week, the trial of Viktor Babaryko, who, like Mr Tikhanovsky, was prevented from running in the presidential election after being arrested in June 2020 on suspicion of financial crimes, is scheduled to begin.

Meanwhile, with the country’s attention on the All-Belarusian People’s Assembly, it was announced that Maria Kalesnikova, who ran Mrs Tikhanovskaya’s election campaign, faces a 12-year sentence on charges of attempting to illegally seize power.

On the streets of Minsk and other major cities in Belarus, small pockets of protest continue, primarily focused on displays of the white and red flag that has become a symbol of resistance to Mr Lukashenko, continue. The country’s rubber-stamp parliament plans to declare the flag “extremist” by the end of the month.

However, the widespread protests of last summer and autumn have, for now, gone into abeyance, a consequence of the fierce repression of Lukashenko’s security forces and a winter that has so far been severe even by Belarusian standards.

Police have used stun grenades, tear gas and truncheons to disperse the peaceful rallies, the largest of which attracted up to 200,000 people. At least two demonstrators have died as a result of injuries sustained at the protests, and almost all of those who have passed through Minsk’s infamous Okrestina jail have told of brutal beatings, torture, little food and water and insalubrious conditions.

And yet despite the carefully staged-managed appearance of the All-Belarusian People’s Assembly, which suggested a president in full control of the country, opposition to Mr Lukashenko has not gone away.

Clement weather, combined with guilty verdicts – there is unlikely to be any other outcome – against figures such as Mr Babaryko and Ms Kalesnikova could spark new, large protests. On February 15, Ms Kalesnikova’s lawyer was stripped of her license to practice law.

Ultimately, however, Mr Lukashenko’s downfall my be brought about from within. According to former Belarusian Minister of Culture Pavel Latushka, more than one thousand civil servants are ready to sign an open letter calling for the president’s resignation.

“People are understandably still reluctant to speak for themselves but are ready to sign a collective letter,” says Franak Viačorka, an advisor to Ms Tikhanovskaya.

Mr Viačorka also believes that far from appearing strong and in control, the All-Belarusian People’s Assembly only served to demonstrate Mr Lukashenko’s weakness.

“Lukashenko understands that he lost people’s support, so he is still clinging on to power by all possible means. The assembly looked like a psychotherapy session for Lukashenko himself. He failed to quell the protests; people continue to resist. The dictator no longer feels confident.”

Covid-19 vaccination rates: Much of CEE is doing better than the UK
Why gaming is set to become Poland’s national brand
Comment