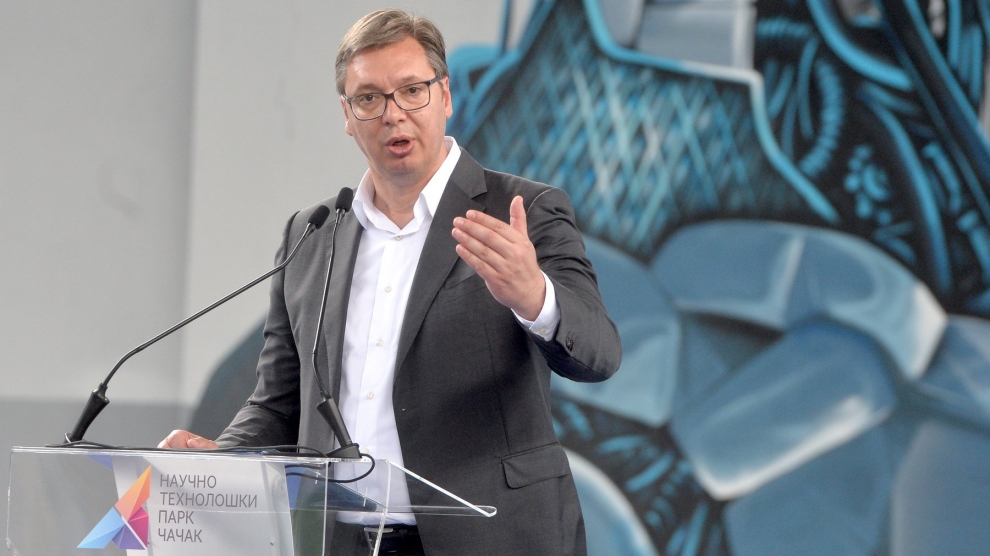 Serbia is set to hold a parliamentary election on June 21, having postponed the poll – originally scheduled to take place on April 26 – due to the coronavirus pandemic.

The ruling Serbian Progressive party (SNS) of president Aleksandar Vučić is expected to once again win a majority and form a new government, and a boycott by some parts of the opposition is not expected to have any real effect.

Here four things to look out for ahead of Sunday’s vote.

The result is a foregone conclusion

Even though the elections are taking place amid calls for boycott and during the biggest pandemic of the last 100 years, analysts don’t think there will be any surprises. The SNS is expected to retain its position as the ruling party after the election. According to a recent poll, SNS will take 58.2 per cent of the vote, allowing it to rule without the need for any coalition partners.

Second best is likely to be the Serbian Socialist party (SPS) led by Ivica Dačić, the current foreign affairs minister and first deputy prime minister. SPS is expected to get 12.5 per cent of the vote.

Four more parties are expected to clear the three per cent threshold to enter parliament, lowered from five per cent earlier this year: the Serbian Patriotic Alliance (SPAS), currently polling at 4.9 per cent, the Movement of Free Citizens (PSG) with 3.4 per cent, and the Serbian Radical Party (SRS) with 3.4 per cent. Additionally, newcomers Metla 2020 (Broom 2020) should also narrowly make it in to parliament. It currently has around three per cent of the vote.

Amidst some opposition calls for a boycott, turnout is predicted to be around 45 per cent, a marked decrease from the 56 per cent in the 2016 election.

With the results already known in advance, the election is a mere formality according to Eric Gordy, professor of political and cultural sociology at the school of Slavonic and East European Studies at University College London.

“When elections are carried out involving no meaningful choice and with no doubt about the outcome, the appearance is much more like that of a performative plebiscite than of citizens expressing their preferences in a parliamentary democracy,” he tells Emerging Europe.

Since we last wrote about the election, little has changed in the electoral landscape. Analysts agree that SNS holds the reins over many pro-government media outlets, especially the tabloids who are still publishing anti-opposition pieces daily.

“This is another instance in a series in which governments led by Vučić have declared elections at an opportune time for them, in which there is no uncertainty about the result, in an environment characterised by heavy handed control over major media, under conditions of an epidemic that is likely to have serious effects on voter turnout, and without adequate international monitoring,” says Professor Gordy.

Vladimir Gligorov, senior researcher at the Vienna Institute for International Economic Studies (wiiw), agrees that this is simply not a competitive election.

“The problem at the local level is that Serbia is quite centralised, so it is risky for voters to install opposition local governments that will not have the ear of the central government. This is basically a one-party system which needs a façade opposition in the parliament,” he says.

Calls for a boycott have fragmented the opposition

During widespread anti-government protests which took place last year, a number of opposition parties signed what was termed an “Agreement with the People” in which they promised to fight for better electoral conditions and even boycott the election if their demands were not met.

But in the run up to the election, several parties, such as PSG, have decided to run regardless. The Democratic party, the largest opposition force, has other ideas and will boycott the election.

This has caused a massive rift in the opposition with accusations coming from those still intending to boycott the poll insisting that participation is the same as supporting Vučić.

“To the degree that a boycott represents a display of power by the opposition, it requires massive public support and unity among the opposition. Neither one of these conditions is present,” adds Professor Gordy.

Mr Gligorov believes that the boycott might makes things at least a little harder for everyone — both the ruling party and the opposition.

“If the turnout, assuming that it is not rigged, is low, around 45 per cent or less, the boycott will have not been altogether in vain. Though the number of registered voters is exaggerated by a lot, if the participation in the upcoming election is 10 percentage points below historical levels, that will be a problem both for the winners and the other parties and coalitions who took part,” he says.

The clash between the government and the opposition is then likely to continue outside of parliament, which could have a destabilising effect on the government.

According to Mr Gligorov, however, if turnout is higher than 50 per cent, it will be the opposition who will have to do a lot of soul-searching.

“So, low participation would extend the life of the opposition as currently constituted. If that fails, then Serbia will have not just have a one-party system, but will turn into an elected authoritarianism,” he warns.

After imposing some of the harshest lockdown restrictions in emerging Europe, Serbia began relaxing its coronavirus measures in early May, ended a state of emergency on May 6. Life has since returned to (mostly) normal.

That doesn’t mean that the epidemic is over, however, as new cases are still being recorded. June has seen several spikes, such as June 5 when 96 new cases were registered.

Local media reports an active case number of 546, out of which 15 people are currently on ventilators.

This has led some to call into question the wisdom of holding an election while the epidemic is still active, and who benefits from such a decision.

“Holding the elections soon after the end of the lockdown promises the best result to Vučić,” says Mr Gligorov.

“There will be choices to be made in part due to the epidemic and the problems it will bring about, so it is better to be done with it before people have the chance to be properly disappointed. Finally, if elections were held in six months or so, the opposition may get better organised and perhaps get their message across.”

Whoever Mr Vučić nominates as prime minister after the election – and there is no guarantee that the incumbent, Ana Brnabić, will be handed a new mandate – will have their work cut out.

According to the most recent World Bank forecasts, from June 2, the Serbian economy is expected to shrink by 2.5 per cent in 2020 and then grow by four per cent in 2021.