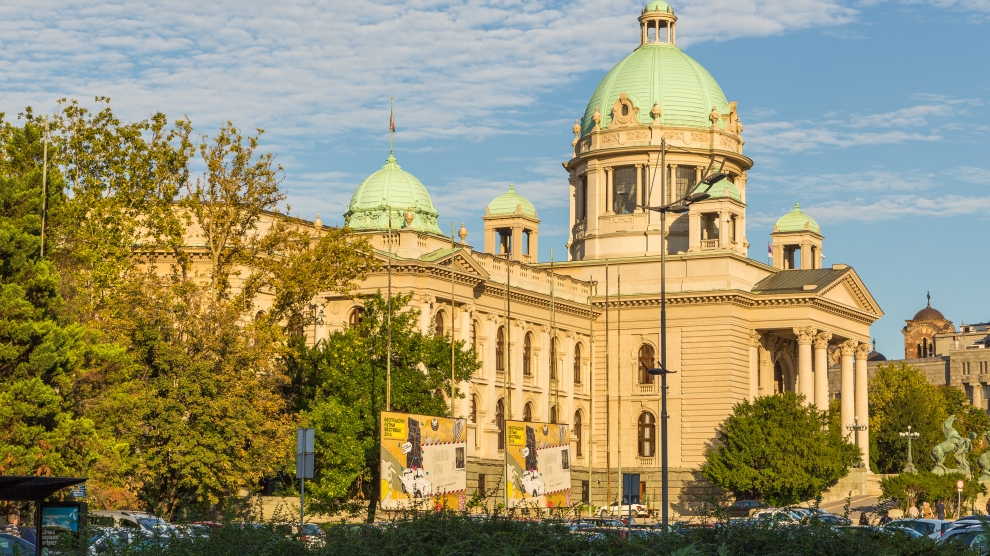 Parliamentary elections are set to be held in Serbia this spring despite some opposition parties calling for a boycott, and weekly anti-government protests taking place in Belgrade every Saturday.

Voters will cast their ballots for the national assembly seats on April 26.

The Serbian Progressive party (SNS), to which both President Aleksandar Vučić and Prime Minister Ana Brnabić belong, will be running in the election, and Vučić is very confident that his party will be successful. Any result that is worse than that of 2016 (when SNS took 48.2 per cent of the vote) would be unacceptable, he warned members of his party last week.

When it comes to the opposition, there is a great deal of division: some parties look set to boycott the vote while others have announced that they will participate.

Those who have decided to fight for seats in parliament include the Serbian Patriotic Alliance, the Serbian Radical party, and the Bells not Parties Movement. The latter also includes the Liberal Democrat party headed by Čedomir Jovanović, a former deputy prime minister. The League of Vojvodina Social Democrats have also announced their intention to run.

The parties boycotting the election have cited political violence and what they perceive as authoritarian rule by the president as their reasons for doing so.

From late 2018, Serbia has seen a series of peaceful protests in Belgrade and other cities. The protests began when an opposition non-parliamentary politician, Borko Stefanović, was assaulted in November that year. Other reasons for the protests include a PhD plagiarism scandal in which the finance minister Siniša Mali was embroiled, and the arrest of a whistleblower who publicised an arms deal which led to weapons ending up in the hands of ISIS fighters in Yemen.

While the protests continue in Belgrade each Saturday, the number of participants has dropped since reaching a peak last year, when tens of thousands took part.

One of the main original organisers of the protests, the 1 out of 5 Million Movement, has nevertheless decided to run in the upcoming elections, to the surprise of many in the opposition. They have since distanced themselves from the demonstrations.

The largest entity boycotting the election is Savez za Srbiju (Alliance for Serbia). In a statement on February 10, the organisation reiterated its commitment to the boycott, saying it will not be changing its “firm decision” to boycott the elections.

The highest profile party within the Alliance is the Democratic Party, which has often been attacked in the tabloid press.

“The worst electoral conditions have to do with the media, where participants are not getting the same terms,” Bojan Klačar, the executive director of CeSID (Centre for Free Elections and Democracy) told Emerging Europe.

Another move by the government which has proven controversial is the lowering of the threshold for entering parliament from five per cent to three.

“The decision should be seen in the context of the boycott announcement and the desire of the ruling coalition to make it easier for election participants to pass the threshold and to encourage political pluralism in the national assembly. This decision will surely fragment the political market in Serbia, especially at the local level,” Mr Klačar added.

The local level is proving very contentious in two municipalities, Šabac and Paraćin, where opposition parties control the municipal governments.

On Monday, Zajedno za Srbiju (Together for Serbia), previously one of the members of the Alliance for Serbia, withdrew from the organisation. The Alliance would not support its decision to run at the local level in Šabac, where it is currently in power.

Together for Serbia is, however, still not running in the national-level election.

A similar drama is unfolding in Paraćin. The mayor (who is also the vice president of the same Democratic party that is boycotting the election) Saša Paunović still hasn’t decided whether or not to run.

Vladimir Gligorov, professor at the Vienna Institute for International Economic Studies (wiiw), told Emerging Europe that the economic impact will depend on the success of the boycott.

“In the case of the boycott succeeding, political instability will depress investments. This has happened in other cases, most recently in Macedonia. The costs would depend on the length of the instability or even on the depth of the political crisis. If, as is more likely, the opposition is only partially successful, the risk of investing in Serbia should not change much and will depend on the prospects of the outstanding issues being addressed by the government.”

What’s next for the ‘Friends of Cohesion’ in EU budget talks?
In emerging Europe, hysteria is spreading quicker than the coronavirus
Comment