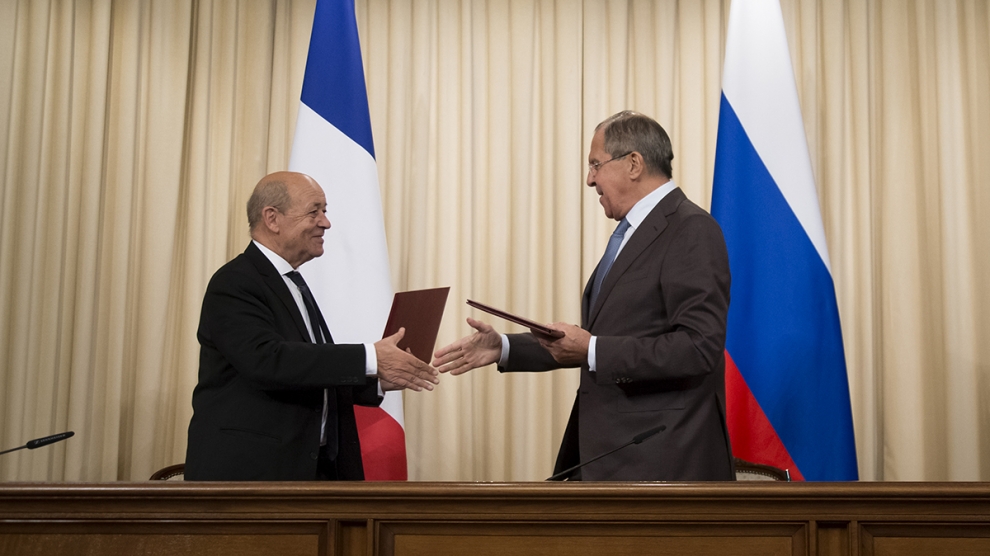 The French foreign minister, Jean-Yves Le Drian, has said that there is “a window of opportunity” for ending the Donbas war in eastern Ukraine after a landmark prisoner swap that took place between Ukraine and Russia on September 7, the French press has reported.

“The time has come, the time is right, to work towards reducing distrust,” Mr Le Drian told reporters in Moscow. He added, however, that it would be too early to discuss the lifting of sanctions against Russia over its annexation of Crimea and involvement in the Donbas war.

Speaking after talks under the so-called 2+2 format, an annual meeting between the French and Russian foreign and defence ministers that had been suspended since Russia annexed the Crimean peninsula in March 2014, Russian foreign minister Sergey Lavrov welcomed the recent statements made by Ukrainian president Volodymyr Zelensky, hailing the prisoner swap as a “good sign” for progress.

The French foreign minister’s comments are part of a diplomatic push initiated by French president Emmanuel Macron during the recent G7 summit to restore relations with Russia.

The statements follow a long-awaited exchange of 70 prisoners between Russia and Ukraine that observers saw as a turning point in easing tension, with Ukraine’s international partners – including the US, NATO, the G7 and the United Nations – welcoming the initiative.

At the same time, EU member states remain divided on the issue: while some EU countries such as Germany, France or Finland welcomed the deal, the Netherlands and the Baltic States expressed disappointment over the release of Volodymyr Tsemakh, a Ukrainian separatist commander who was handed over to Moscow despite being a key witness in the downing of the MH17 flight of the Malaysia Airlines by pro-Russian rebels in 2014.

Kyiv and Moscow are now expected to return to the negotiating table in the next Normandy summit, a quadrilateral forum of France, Germany, Russia and Ukraine aimed at resolving the Ukraine crisis. US president Donald Trump said that he would join the talks if Ukraine requested he do so.

On September 10, Mr Macron’s office announced that the next Normandy summit would be held in Paris “in the next few weeks.”