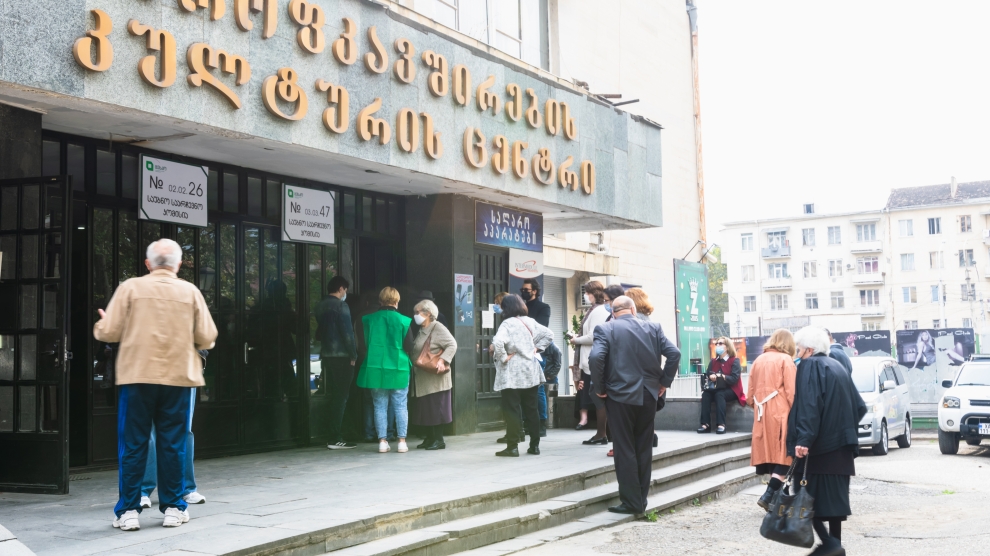 Georgia’s ruling party, Georgian Dream, has won a comfortable majority in a parliamentary election but the country’s opposition has cried foul, alleging that the vote was rigged and organising demonstrations in the capital Tbilisi, demanding a new vote.

Georgian Dream, led by the country’s richest man, Bidzina Ivanishvili, took almost half of the votes in the election on October 31, while the biggest opposition alliance, led by the United National Movement (UNM) party, got 27.1 per cent. Several other opposition parties managed to clear the one per cent threshold for membership of the 150-seat parliament, meaning that its composition is likely to be more diverse than ever. Turnout was 56 per cent.

The election was the first under a reformed electoral system introduced in June giving more weight to proportional representation. Of 150 seats in parliament, 120 seats are determined based on party lists and just 30 seats through single-mandate, direct-voting districts.

The current results give Georgian Dream 75 seats in parliament, one seat short of a majority. However, runoff elections will be held in 15 direct-voting districts, almost all of which the ruling party is likely to win.

“This is a big win,” said Irakli Kobakhidze, Georgian Dream’s executive secretary. “Free and fair elections are main achievement of Georgian Dream,” he told reporters at a press conference.

Observers from the Organisation for Security and Cooperation in Europe (OSCE) have said the vote was competitive and that overall, fundamental freedoms were respected. The OSCE did, however, report allegations of pressure on voters and that the blurring of the line between party and state reduced public confidence in parts of the process.

A statement from the US embassy in Tbilisi echoed the assessment of the OSCE, while calling for transparency in resolving the complaints.

“These efforts to corrupt the electoral process through voter intimidation, vote buying, interfering with ballot secrecy, blurring of party and official activities, and violence against election observers and journalists, while not sufficient to invalidate the results, continue to mar Georgia’s electoral process and are unacceptable,” the embassy said in a statement.

Georgian Dream says the OSCE assessment proves that the elections reflected the popular choice. “The assessment is much more positive than in the case of previous elections,” said Archil Talakvadze, the chairman of Georgia’s parliament.

The opposition does not agree, however.

“This is not a real picture and these results don’t reflect the will of Georgian people,” said UNM member David Kirtadze, while another of the party’s leading figures, Nika Melia, added: “We will not accept these results.”

The election followed a highly polarised campaign in which Georgian Dream and the United National Movement traded personal attacks. Georgian Dream was criticised for its handling of a struggling economy, and the coronavirus outbreak. Georgia initially dealt with well the pandemic, keeping the number of infections low, but since September has been fighting a losing battle against the second wave, with the number of daily infections now at record high levels.

Georgian Dream’s chief tactic was to target Mikheil Saakashvili, UNM’s honorary leader who was Georgia’s president from 2004 to 2013. Mr Saakashvili fled the country after a series of criminal charges were filed against him, which he argues are politically motivated. He currently resides in Ukraine.

A Georgian court in January 2018 convicted the former president of hiding evidence in the killing of a banker and was sentenced to three years in prison. In June of that year he was also convicted of abuse of power and sentenced in absentia to six years in prison.