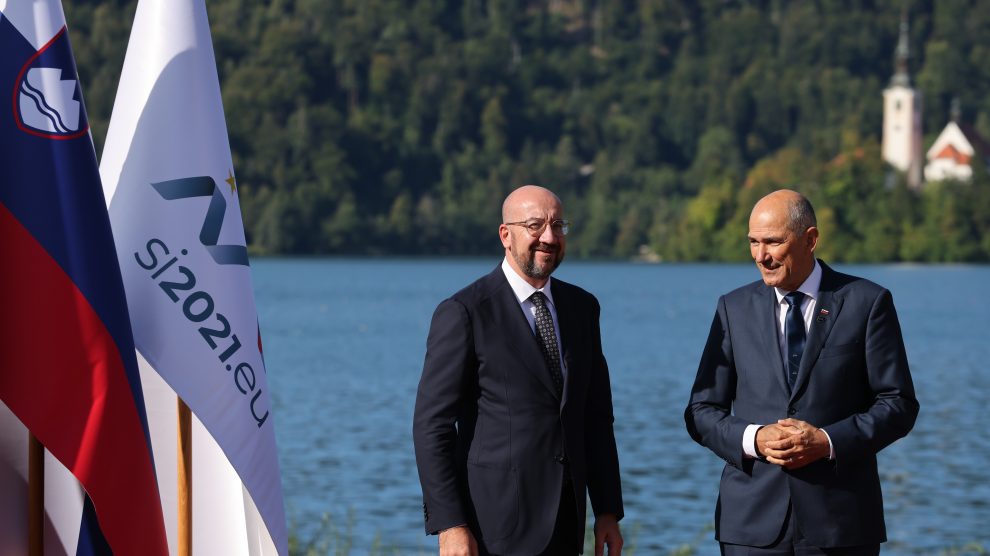 Slovenia currently holds the six-month rotating presidency of the Council of the EU. How is its turn at the helm shaping up so far?

Slovenia officially took over the six-month, rotating presidency of the Council of the European Union on July 1, the second time that the country has held the agenda-setting position since it became an EU member in 2004.

According to Boštjan Udovič, a political scientist at the University of Ljubljana, the timing is unfortunate: July-December presidencies tend to be less memorable than their January-June counterparts.

“The problem is always the August break,” he tells Emerging Europe. “It means that the presidency doesn’t really start until September.”

Nonetheless, Udovič and other Slovenian analysts believe that the Slovenian presidency has made a good start – working hard behind the scenes – and is in a decent position to make the best of its remaining time, not least when it comes to EU enlargement in the Western Balkans.

The EU member states in close proximity to the Western Balkans which have held the presidency have all made enlargement a priority, including most recently Bulgaria in 2018 and Croatia in 2020.  Neither, however, made any significant progress.

Slovenia is intent on changing this, with the country’s prime minister Janez Janša (who was also PM the last time Slovenia held the presidency in 2008) promising that, “we need to focus on this strategic issue. We will do our best to take at least some steps forward”.

Gorazd Justinek, a professor at the Faculty of Government and European Studies at the New University in Slovenia, and an economic adviser to Janša during the country’s 2008 presidency, says that putting enlargement back on top of the EU agenda, especially in regards to the Western Balkans, is the most important thing Slovenia can do.

“It is a region that must be dealt with,” he tells Emerging Europe. “However, the feeling is that in the previous years the region was forgotten.”

“I hope that the Slovenian presidency’s biggest achievement will be the EU-Western Balkans summit on October 6,” adds Udovič, referring to an event set to take place in Brdo, which Foreign Minister Anže Logar has said Slovenia aims to make an annual event to facilitate the European integration of the countries of the region.

Logar says that a yearly summit will keep the spotlight on the region, and apply “an important type of pressure” on EU member states such as Bulgaria which have blocked the beginning of enlargement talks for Albania and North Macedonia for reasons unrelated to the candidate country’s ability to meet accession criteria.

“History teaches us what happens when core European states turn a blind eye to the Western Balkans,” says Slovenian EU law expert Jernej Letnar Černič, who laments that, “it seems that the ‘old’ EU member states are not fully behind further integration [in the] Western Balkans.”

The Future of Europe

“Also of importance, at least here in Slovenia, is the Conference on the Future of Europe. Practically every day there is some kind of a debate on the topic of the EU, which is, again, from my perspective, very positive,” says Justinek.

The Conference on the Future of Europe is a joint endeavour of EU bodies which emerged in 2019 as a means of facilitating the involvement of individuals, civil society as well as national, regional and local authorities in the EU-level decision making process.

The first such conference is expected to be held in the spring of 2022, with key topics of discussion being the environment, the European economy, the bloc’s foreign relations, values, digital transformation, democracy, and health.

Udovič argues that opening the door for greater cooperation in healthcare within the bloc could be an important contribution of the Slovenian presidency. “This could move the EU towards a health union,” he says.

Černič is also convinced that the Slovenian presidency has been able to contribute to the joint future development of the Union, arguing, “the most notable achievement of Slovenia’s EU Council presidency has so far, after almost three months, been its contribution to the successful recovery of the EU economy in the last phases of the [Covid-19] pandemic”.

“Eighteen national recovery plans have been adopted,” he adds, highlighting the extraordinary times at which Slovenia’s presidency is taking place.

However, others have questioned Slovenia’s ability to contribute to these pressing issues.

“The main problem is not that the Slovenian presidency has been unambitious, but its potentially negative role in the rule of law crisis,” Bojan Bugarič, a professor of EU law at the University of Sheffield tells Emerging Europe, referring to the on-going spat between Hungary, Poland, and the EU’s supervisory bodies.

“I would like to see more progress on the EU’s supervision of upholding the rule of law and human rights protection in [member states] from Spain and the Netherlands to Poland and Hungary,” he says.

Ana Bojinović Fenko, a professor of international relations at the University of Ljubljana, argues that this would be an unlikely outcome considering the current political climate in Slovenia itself.

“I am critical of how the function and the purpose of the presidency of the EU have been severely misused [by Slovenia]. The current Slovenian government instrumentally applies the ‘EU leadership position’ to increase domestic perception of its power and raise legitimacy of its own decree-led governance,” she tells Emerging Europe.

“Such executive aggrandisement is dangerously closing door to democracy in Slovenia. As a result, the distorted and primarily domestic focus of the government also limits the potential that Slovenia might have in the Council,” she adds, arguing that this political exploitation of the presidency limits Ljubljana’s ability to play the decisive role it seeks for itself in the Western Balkans.

Fenko further points to the unique opportunity the country has to “facilitate dialogue between net contributors and net recipients on economic, social and environmental aspects of the Green Deal”.

However, she deems this unlikely, considering how, “the illiberal-minded fraternisation with Hungarian and Polish governments has weakened the position of Slovenia as an honest broker.”

Digitalising public services is not about cost, but making them better, reveals new white paper
Poland set to lose out on Just Transition Funds over refusal to close Turów coal mine
Comment