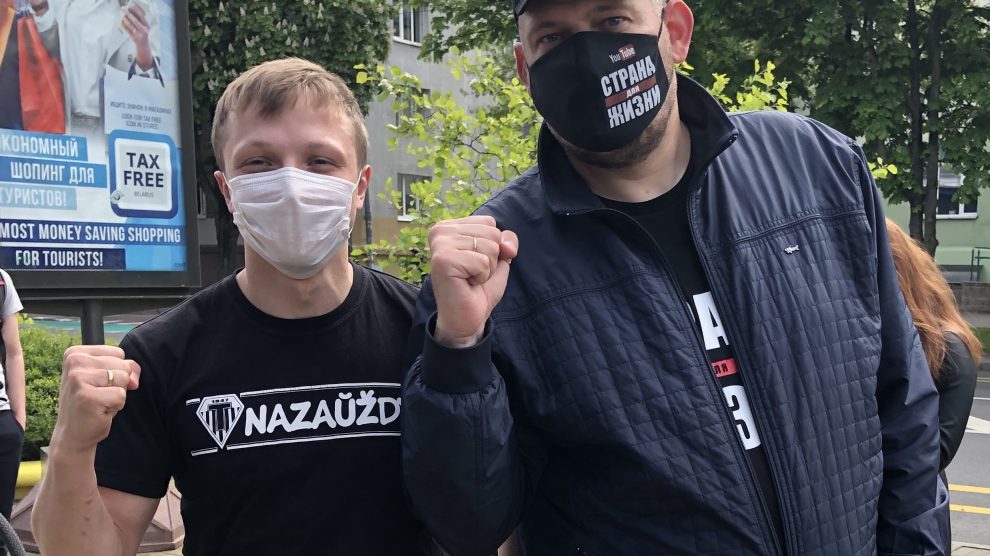 Ahead of the EU’s Eastern Partnership summit in Brussels, which will take place without representatives of the Minsk regime, Alexander Lukashenko takes “personal revenge” on Sergei Tikhanovsky.

Sergei Tikhanovsky (pictured above, right), the husband of Svetlana Tikhanovskaya, the leader of the Belarusian democratic opposition, was on December 14 sentenced to 18 years in a maximum security prison by a court in Minsk.

Tikhanovsky was arrested last year shortly before a presidential election in which he had intended to run against the country’s long-term dictator, Alexander Lukashenko.

The dictator nevertheless declared himself the winner of the election, held on August 9, 2020, with an implausible 80 per cent of the vote.

The result sparked widespread demonstrations, mass arrests and a wave of repression that continues to this day. Tikhanovskaya was forced to flee Belarus with her children a few days after the vote.

Shortly after her husband’s sentence was announced, she called it: “Lukashenko’s personal revenge”.

“The dictator publicly takes revenge on his strongest opponents,” she wrote on Twitter. “While hiding political prisoners in closed trials, he hopes to continue repressions in silence. But the whole world watches. We won’t stop.”

Western countries were quick to denounce the sentences. Germany’s new foreign minister, Annalena Baerbock, called the verdicts “scandalous” while the US Secretary of State Antony Blinken said: “neither these individuals, nor the Belarusian people, warrant such harsh repression”.

Tikhanovsky’s sentence is the latest in a string of long prison terms handed down to anyone who dared stand against Lukashenko in the presidential election.

Earlier this year, Maria Kalesnikava, who ran Tikhanovskaya’s campaign, was sentenced to 11 years in prison for her political activity along with another opposition figure, Maksim Znak. Kalesnikava started out last summer as the campaign chief of Viktor Babaryko, whose own arrest prevented him from running in a presidential election.

Babaryko was also sentenced to 14 years in prison earlier this year on corruption charges that both and he and the Belarusian opposition have always claimed were politically motivated.

No Belarus at Eastern Partnership summit

The sentencing of Tikhanovsky came one day before the European Union’s Eastern Partnership summit, set to take place in Brussels with an empty chair for Belarus. The country suspended its participation in the partnership earlier this year.

On December 12, Charles Michel, the president of the Council of the EU, met with Tikhanovskaya and pledged his continued support for the people of Belarus.

“We hear your voices here and in your homeland. The EU’s unity and solidarity is unwavering,” he said, but there is much disappointment in some EU circles that Tikhanovskaya has not been offered to take Lukashenko’s place at the summit alongside the leaders of the other Eastern Partnership countries, Armenia, Azerbaijan, Georgia, Moldova, and Ukraine.

The European Commission did, however, on December 12 say that it will mobilise an additional 30 million euros to further strengthen its support for the people of Belarus. This new funding will complement and expand the already existing EU support for youth, independent media, small and medium-sized enterprises in exile, and culture.

European Commissioner for Neighbourhood and Enlargement Olivér Várhelyi, said: “Ahead of the Eastern Partnership summit, this announcement to increase our support is another clear sign that the European Union continues to stand firmly behind the Belarusian people in their fight for freedom. The Belarusian people can continue to count on the support and solidarity of the European Union in their struggle for building a democratic future.”

The European Commission is also ready to launch a comprehensive plan of economic support worth three billion euros for a democratic Belarus, in line with its commitment to support a peaceful democratic transition in the country, should such a transition take place.

The head of Lithuania’s state-run railways, Mantas Bartuska, meanwhile agreed on December 14 to step down in order to “de-escalate” public outcry over the transport of potash from Belarus.

Belarus uses Lithuania’s Klaipeda port to export potash from state-owned producer Belaruskali, one of the world’s largest producers of the crop nutrient, which is Minsk’s main foreign currency earner.

Belaruskali was sanctioned by the United States in August, but LTG said in a statement that it lacked sufficient legal grounds to stop the transportation of potash.