The Southern Gas Corridor project, which would transport Azeri gas to Europe, will be able to ensure the much needed diversification of European energy supplies, the International Gas Union (IGU) has said.

“Domestic production in Europe is on the decline and more imports will be needed. Projects such as the Southern Gas Corridor not only bring more needed supply to Europe, but they also bring needed diversification of supply thus enhancing the security of supply,” IGU’s analysts told Azerbaijani state news agency Trend.

On July 2, Azerbaijan’s state energy firm SOCAR completed the construction of the Trans-Anatolian Pipeline (TANAP), the central element of the Southern Gas Corridor, which will deliver Azeri gas from Turkey to Greece and Bulgaria.

The corridor includes two other elements: the South Caucasus Pipeline (SCP) running from Azerbaijan’s Shah Deniz gas fields through Georgia to Turkey and the Trans-Adriatic Pipeline (TAP), that connects the Turkish pipeline with Italy through Greece.

The Azeri media recently reported that TANAP and TAP were connected at the Turkish-Greek border, with the latter expected to be completed by the end of 2019.

The initiative was put forward by the European Commission, aimed at reducing energy dependence on Russia and diversifying natural gas imports by establishing a gas route from the Caspian gas fields to Europe.

Once completed, the Southern Gas Corridor will deliver an annual 10 billion cubic metres of gas to European consumers.

In August, the European Commission reportedly “resumed” negotiations with Turkmenistan about the so-called Trans-Caspian pipeline that would ship Turkmen gas to Europe by connecting Turkmen supplies to the Southern Gas Corridor.

The gas route is expected to be operational by 2020. 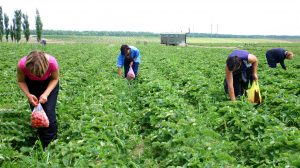