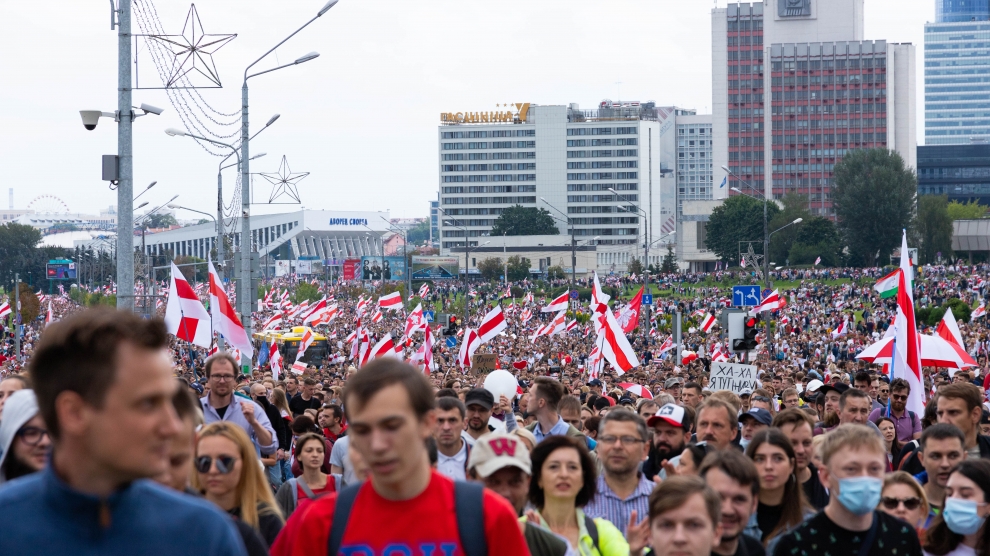 Almost two months have now passed since a presidential election in Belarus which the incumbent, Alexander Lukashenko, claims to have won with over 80 per cent of the vote.

The response of the Belarusian people to the rigged election on August 9 was instant: the moment that an exit poll announced Mr Lukashenko as the clear victor, hundreds of thousands of people took the streets of towns and cities across the country to make it clear that this time – unlike several previous occasions when Mr Lukashenko declared himself the winner – they would not accept a clearly implausible result.

Mr Lukashenko’s own response was equally swift: security forces brutally put down the protests, arresting and imprisoning thousands over the following three days. At least two protesters were killed, and hundreds tortured while in detention. International condemnation followed, but little else.

Since then, the country has been in limbo. While outright repression eased slightly as a result of the international reaction, arrests have continued. Mr Lukashenko – still backed by the security forces and the army – has been inaugurated as president for a new term in office despite few people – either within Belarus or abroad – recognising him as the country’s legitimate president.

Daily protests against his regime continue, the largest of which take place each Sunday. This weekend was no different, with more than 100,000 people once again defying a heavy security presence to march through the streets of Minsk and other towns and cities to demand a new, free and fair election.

Support from the international community for the protesters, and for Svetlana Tikhanovskaya, almost certainly the real winner of the August 9 election, remains lukewarm. While the European Union last week finally agreed to implement limited sanctions – such as asset freezes and travel bans – against 40 Belarusian officials, Mr Lukashenko was surprisingly not among them.

Top of the list is Interior Minister Yuri Karayev because of his responsibility “for the repression and intimidation campaign … including torture of peaceful demonstrators as well as intimidation and violence against journalists.”

Other sanctioned individuals include former Prosecutor General Alexander Kanyuk, who “was responsible for the widespread use of criminal proceedings to disqualify opposition candidates ahead of the 2020 presidential election and to prevent persons from [challenging] the outcome of that election.”

Also on the list are 12 members of the Central Electoral Commission due to what the EU calls “their responsibility for the misconduct of the 2020 presidential electoral process … and their falsification of election results.”

EU Council President Charles Michel last week reiterated the bloc’s stance that “the people of Belarus have the right to determine their own future”, while European Commission chief Ursula von der Leyen stressed that “there will no impunity for those who are responsible for the crackdown on demonstrator and oppositions candidates.”

The exclusion of Mr Lukashenko from the sanctions however suggests that the EU is still hopeful of negotiating a peaceful transition of power to the Coordination Council created by Mrs Tikhanovskaya in August.

Mrs Tikhanovskaya – currently in exile in Lithuania – has increasingly received support from some western politicians, and has met with the French president, Emmanuel Macron, as well as Poland’s prime minister, Mateusz Morawiecki, before that. The French president certainly believes that a negotiated settlement is possible, and has offered to mediate talks.

“We will do our best as Europeans to help mediate,” said Mr Macron after his meeting with Tikhanovskaya. “Our objective is for this mediation to begin in the next few days or weeks.”

“The aim is a peaceful transition, the release of people who are in prison for their political opinions and the holding of free elections under international observation,” Mr Macron added.

Lukashenko has shown no signs at all, however, that he is ready to negotiate. As long as the security forces, and – importantly – Russia back him, he feels under no pressure to negotiate and hand over of power. His response to the EU’s limited sanctions was to announce sanctions of his own, against the EU, including an order that Poland and Lithuania – so far the most vehement supporters of Mrs Tikhanovskaya – should reduce the size of their diplomatic missions in Minsk.

Mr Lukashenko also warned the EU against “attempts to impose on Belarusians some externally-approved representatives, projects of some ‘governments in exile’, which are doomed to fail. The fate of such structures is sad.”

On October 6, Mrs Tikhanovskaya will meet the German chancellor, Angela Merkel, in Berlin, where, she says, “we will discuss ways to put pressure on Belarus, because Belarusians think that only with pressure can we force the authorities into dialogue with the people.”

Unless Mr Lukashenko has an unlikely change of heart, such dialogue currently looks impossible. Belarus looks set for weeks, perhaps even months, of continued stalemate.