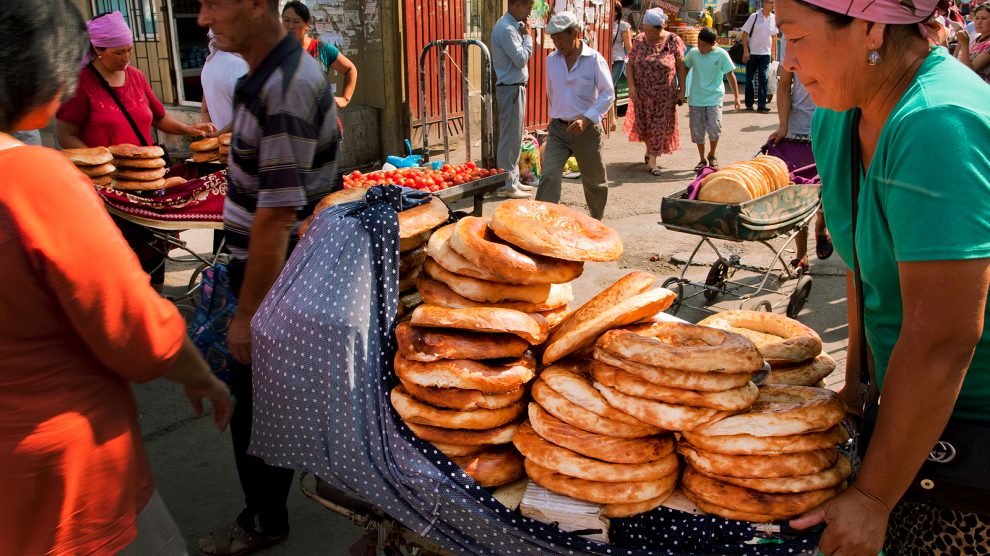 Once sold as a way to promote economic growth and reverse social inequalities, microcredit in Central Asia increasingly looks more like a way to rebrand marginalised groups as high-yielding investment opportunities.

Back in April, a group of around a dozen women in Kyrgyzstan’s northern Chuy province seized a rural state administration building and barricaded themselves inside.

Holding bottles full of gasoline and wearing black funeral-style headscarves, the women threatened to set themselves and the building on fire if their demands were not met.

“We sit here, exchanging our white dresses for black, to express the pain of the whole population,” one of the women announced on camera, holding her bottle of gasoline aloft.

“We’re sick of financial slavery! Eradicate the usury!”, the other women chanted.

The group of women, all single mothers, had all been in debt to banks and microcredit institutions for three years. They demanded that the interest accrued on their loans to be written off, and called for a dialogue with the country’s president, Sadyr Japarov.

It was the latest in a series of protests against the microcredit industry in Kyrgyzstan, which began in 2016, when hundreds of people rallied in front of the United States embassy in Bishkek, blaming US-backed organisations such as USAID and international institutions like the World Bank for funding, creating and supporting exploitative microcredit companies in the country.

In neighbouring Kazakhstan, residents of Almaty and Nur-Sultan have held several similar protests and rallies, with some success.

In 2019, Kazakh President Kassym-Jomart Tokayev had the country’s banks write off debts accrued by nearly 30 per cent of the country’s population – illustrating the extent of the issue.

Often sold as a way to stimulate economic activity and provide a boost to historically marginalised groups such as women and ethnic minorities, in some parts of Central Asia the microcredit industry has only deepened wealth inequalities, and has had a disproportionately adverse effect on the lives of women.

The microcredit industry first developed in Central Asia in the 1990s, with direction from primarily western NGOs and international finance institutions.

The collapse of the Soviet Union in 1991 and the subsequent independence of the five Central Asian states brought new economic players into the region. International donors and investors began helping to set up microcredit institutions. The World Bank’s International Finance Corporation mandated that these institutions be fully commercialised. In both Kyrgyzstan and Kazakhstan, government deregulation of the finance industry allowed the these fledgling microcredit institutions to set their own interest rates, penalties and commission fees, essentially giving them free reign to do business as they pleased.

Some lenders charged annual interest rates of well over 100 per cent. Others imposed penalties which were double the amount of the original loans. In both Kyrgyzstan and Kazakhstan, laws protecting borrowers are insufficient and thousands of people have found themselves at the mercy of microcredit institutions.

Women have been particularly affected by this – as April’s incident in Chuy province in Kyrgyzstan demonstrates.

The economic reforms of the 1990s made women more likely to need such loans, as the privatisation of state-owned enterprises wreaked havoc on female employment in the region – in 1988, 90 per cent of working-age women in the Soviet Union were in full-time employment or studies, the highest of any industrialised nation. This percentage today is far lower in every Central Asian country. In Kyrgyzstan, it has dropped to 43 per cent.

Privatisation of land and agricultural funnelled assets and capital upwards: predominantly towards men.

Hundreds of thousands of women who had been employed in industry were instead pushed into petty trading through western-supported microfinance schemes. The subjecting of social services like healthcare and education to budget cuts and market mechanisms also pushed many people (again, particularly women) to go into debt to pay for key services and procedures.

The privatisation of housing has also placed home ownership out of reach of large parts of the population, forcing many to take on high-interest mortgages.

According to a 2021 survey of microcredit borrowers in Kazakhstan, 29 per cent took out loans to pay for emergency expenses, with a further 21 per cent doing so “to make ends meet” and another 16 per cent to pay off bank loans.

Debt collection is often conducted in an aggressive and humiliating manner. Dozens of suicides across Kyrgyzstan and Kazakhstan have been linked to debt to microcredit institutions. There have been cases of people losing their entire homes over loans of just 1,000 US dollars. Banking and microfinance laws even allow banks and microcredit institutions to pursue surviving family members if a borrower died before fully repaying the loan.

According to Maksym, the director of an association of microfinance companies in Kyrgyzstan, most people manage to repay their debt, but “at the cost of sacrificing their food security, education and health…people are making their repayments on time but are cutting back on essential goods. This obviously causes immense misery.”

While supporters of the system maintain that microcredit is an effective way of stimulating economic activity, and that people are free to enter (or not) into such contracts, the fact remains that there is an imbalance in authority, information and initiative between the lender and the borrower.

Furthermore, the substantial freedom that microcredit institutions have to set the terms of their loans allows for more predatory practices, with dozens of “hidden” commission fees a mild example of this.

Stronger regulations are needed to reign in the worst excesses of such institutions, if they are to function in the way that they were designed to.

However, according to UN estimates, between 1995 and 2012, repayment of interest on microloans siphoned 125 billion US dollars from the Global South to the Global North, while doing little to actually alleviate poverty.

Once sold as a way to promote economic growth and reverse social inequalities, microcredit in Central Asia increasingly looks more like a way to rebrand marginalised groups as high-yielding investment opportunities.