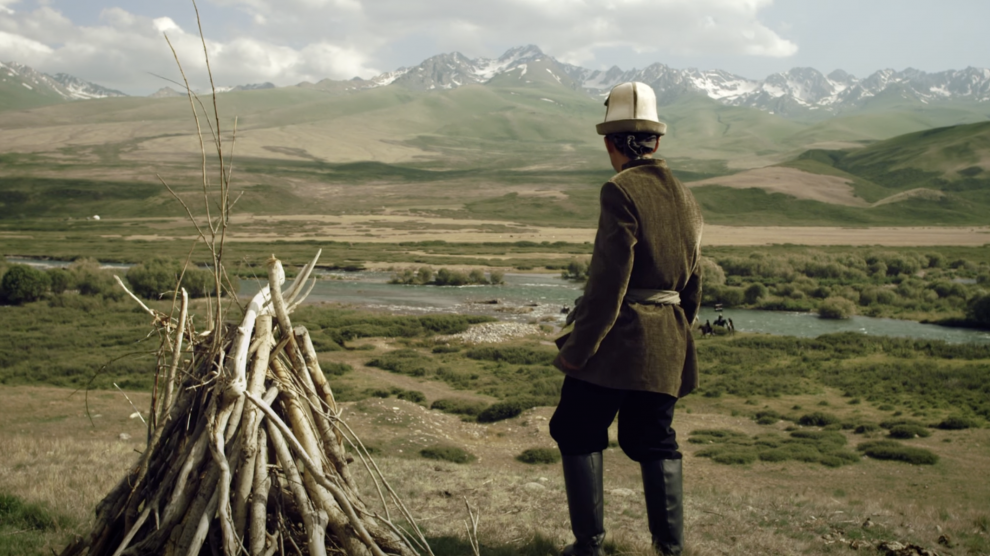 Cinema in Central Asia arrived with the Bolsheviks. Propaganda documentaries by the likes of Dziga Vertov, made in the early years of the Soviet era, travelled throughout the region to showcase the widespread changes happening in society and highlight Central Asia’s remarkable ethnic and cultural diversity.

Since the five countries of the region (Kazakhstan, Kyrgyzstan, Tajikistan, Turkmenistan, Uzbekistan) gained independence from the Soviet Union in the early 1990s, the development of film has taken a different trajectory in each of the five republics.

Kazakhstan’s film industry has flourished over the past two decades, while some Kyrgyz films have performed well in regional cinemas. However, in other countries, politics has bogged down the film industry, particularly in Turkmenistan, where films were virtually banned for nearly a decade.

As a taster of what the region can offer, we have picked five films, one from each country, that are worth your time.

The largest country in Central Asia, Kazakhstan unsurprisingly has the most prolific film industry, both from the state-owned studio and from independent producers.

Killer, a joint French-Kazakh production, was one of the first Kazakh movies to make any waves internationally, winning the Un Certain Regard Award at the 1998 Cannes Film Festival.

The film is a wonderful microcosm of the chaotic 1990s. The protagonist is a young man named Marat, living in Almaty and working as a chauffeur. Early in the film, he causes a car accident with a Mercedes and falls into debt as a result. His infant child then falls ill, forcing Marat to turn to shady figures in the criminal underworld to raise funds. He eventually agrees to murder a journalist on behalf of a criminal organisation for money.

The film captures the dreary, desperate air of the early post-Soviet years. Peoples’ yearning for the comfort and stability of yesteryear is apparent in some of the dialogue. The desperation which set into the population permeates every character in the film and the plot exposes some of the very real effects of unfettered privatisation on regular people – like Marat becoming destitute as a result of one of life’s unavoidable circumstances.

Queen of the Mountains (Kyrgyzstan, 2014)

A historical epic about one of the most remarkable figures in Kyrgyz history.

Queen of the Mountains chronicles the life of Kurmanjan Datka, a 19th century Kyrgyz stateswoman who is widely considered to be one of the founders of the modern Kyrgyz nation.

Early in the film, Kurmanjan shows her strong will and independence when she, at the age of 18, scandalously leaves her arranged marriage, apparently without consummation. She then marries an ambitious feudal lord who she loves, but he is killed in political intrigues with local rivals, handing his authority to Kurmanjan.

The film then skips several decades, to when the Russian Empire was encroaching on modern-day Kyrgyzstan. The proud highlanders initially resist, led by Kurmanjan. However, when it becomes clear that they stand no chance of winning against the much more powerful Russian Empire, Kurmanjan leads her people to a compromise with the invaders, allowing them to preserve their culture while avoiding bloodshed.

Filmed with a budget of 1.5 million US dollars (enormous by the region’s standards), it remains the highest grossing film in Kyrgyz history. The film is full of gorgeous shots of the Kyrgyz mountains and the traditional costumes are colourful and alluring.

The content of the film, about an intelligent, strong-willed and visionary female leader in a highly traditional society also sends a powerful message – that it is based on true events, makes it all the more powerful.

The film takes place in a remote Uzbek village where Kamil, a relatively wealthy landowner, takes a fourth wife, Farida, because his first three could not bear him an heir. The arrival of Farida uproots the established dynamics within Kamil’s family and is the source of much tension between the wives.

This family drama is played out against the backdrop of the Russian Civil War between the Bolsheviks and Tsarist loyalists, giving the impression that you are witnessing the age-old traditions and family dynamics being on the verge of irreversible change.

Directed by Yalkin Tuchiyev, the film shows the imbalanced gendered relationships between husband and wives. Kamil’s wives look and behave more like his maids than his lovers – for example, in a dinner scene, the wives only eat once their husband has begun. While slow-paced, the film is still a fascinating glimpse into a different time period in an “exotic” locale.

A Romeo and Juliet-esque love story, Mushkilkusho has the additional distinction of having dialogue largely in Pamir, an endangered Eastern Iranic language native to the Pamir Mountains in Central Asia.

Directed by Umedsho Mirzoshirinov, it is about a Pamiri girl from Tajikistan, living in Moscow, who falls in love with a Russian boy, much to the disapproval of both families.

With more than ten per cent of Tajikistan’s population living in Russia, immigration is a powerful motif in society. This film captures the loneliness, alienation and struggles that these migrants face in Russia – both in terms of job prospects and in navigating a different culture and often facing racial abuse and discrimination.

Part of the film is shot in the Pamir Mountains in Tajikistan and gives an interesting glimpse into a dying culture.

Mushkilkusho was screened at the International Muslim Film Festival held in Kazan, Russia and is considered to be one of the most important films in Tajikistan’s fledgling film industry.

Turkmenistan has by far the most limited film production in Central Asia. A large part of this is because film production, like many other so-called “frivolous” things, was virtually banned for most of the reign of Saparmurat “Turkmenbashi” Niyazov.

While the rules were relaxed following Turkmenbashi’s death in 2006, the country’s film industry is still highly controlled by the state and produces few films.

However, before Turkmenbashi became overtly authoritarian, Turkmen cinema enjoyed a brief bloom in the early 1990s. One of the films to come out of this period is Karakum, a joint German-Turkmen production directed jointly by German Arend Agthe and Turkmen Uzmaan Saparov. It is an adventure story about a German boy, visiting his father working in the Turkmen desert, who ends up lost in the desert with a Turkmen boy. The two then find their way across the desert, bridging the substantial cultural differences between them.

Karakum is one of very few films shot in Turkmenistan. The country remains highly secretive and difficult to access, particularly for foreigners – this makes viewing the film all the more interesting, giving a glimpse of life inside the isolated country.