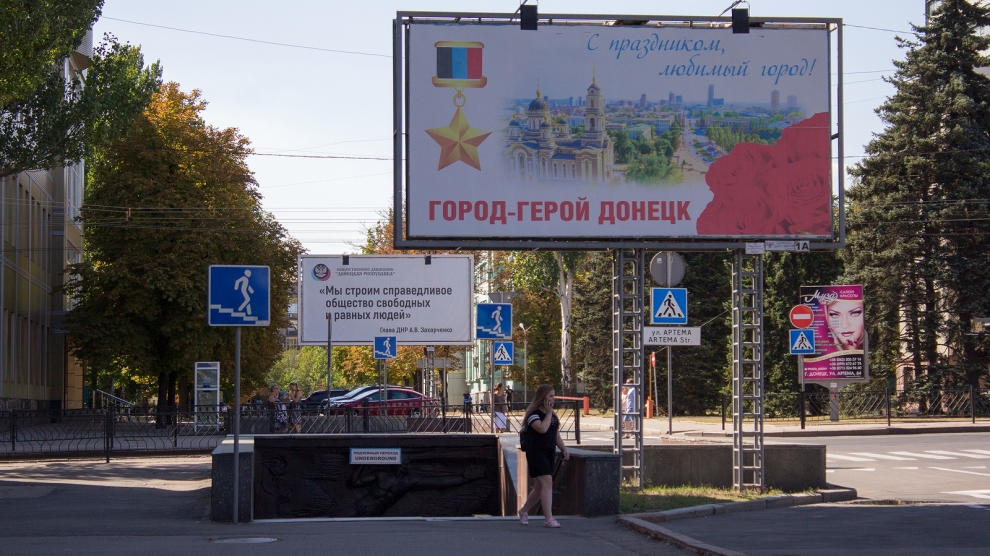 Ukraine is exploring new ways to engage in negotiations with the pro-Russian separatists in the country’s Donetsk and Luhansk regions, including the creation of an advisory council to the Minsk-based Trilateral Contact Group (TCG), which includes the representatives of Russia, Ukraine and the Organisation for Security and Cooperation in Europe (OSCE).

The advisory council, set up following a meeting between the Ukrainian president Volodymyr Zelensky’s chief of staff Andrey Yermak and the deputy chief of staff for the Russian president Vladimir Putin, Dmitry Kozak, is made up of 10 Ukrainian officials and 10 representatives from the self-proclaimed People’s Republic of Donetsk and Luhansk (DPR and LNR).

France, Germany, Russia and the OSCE will supervise the talks.

The advisory council will reportedly focus on preparing local elections in the Donetsk and Luhansk regions, a central element of any future peace deal.

The establishment of the advisory council hints at a major Ukrainian policy shift.

Since the outbreak of the Donbas war in 2014, Ukrainian officials have consistently rejected calls from Russia to engage in direct talks with the separatist “republics”, viewing such a move as legitimising the two Russian puppet states, both of which remain unrecognised by the international community.

It therefore comes as no surprise that much of the Ukrainian public, which according to a number of surveys is divided on whether or not to achieve peace “at any cost”, has fiercely criticised Mr Zelensky’s decision to sanction the setting up of the advisory council. A number of Ukrainian MPs – including some from Mr Zelensky’s ruling Servant of the People party – have signed a petitioning against it.

“Creating any advisory councils with the Russian puppets will lead to a creeping surrender,” Petro Poroshenko, Mr Zelensky’s predecessor and the de facto leader of the Ukrainian opposition said last week. “The reasons have increasingly become clear: reducing the chances of [Ukraine’s] NATO membership and renewing water supplies to the occupied Crimea. Because this is what the Kremlin wants.”

Mr Poroshenko went so far as suggesting that such an initiative is “tantamount to treason.”

“Ukraine does not and will not hold negotiations with [pro-Russian] militants,” the Ukrainian president’s administration has countered, arguing that “in order to continue advancing the Minsk process, but not to enter into direct negotiations with the representatives of the so-called LPR and DPR, the possibility of establishing an advisory council to support the TCG is at this stage only being considered. It would only feature reputable people from the Donbas, with a pro-Ukrainian position.”

Mr Yermak himself has said that the format of the Trilateral Contact Group has not changed. “There are two parties to the conflict, Ukraine and Russia, and there is the OSCE between them,” he said.

Speaking on Ukrainian television on March 13, he insisted that the agreement signed last week was only a declaration with no legal force. According to him, the newly established advisory council was not established to create a basis for recognition of the ORDLO [temporarily occupied and uncontrolled territories of Ukraine].

Mr Zelensky’s administration has in recent months been instrumental in two major prisoner exchanges between Russia and Ukraine, both of which were the direct result of negotiations between Kyiv and Moscow. However, involving the Donbas rebels in the Minsk peace process would certainly have an impact on both domestic politics and attempts to resolve the conflict.

“Moscow always insisted on establishing direct negotiations between Kyiv and the so-called separatist republics. The creation of an advisory council is not a direct negotiation. However, this is a serious litmus test for Ukrainian society, of its readiness to accept the transformation of Russia from aggressor to observer, or even more hypocritically, to the status of mediator,” Olena Zerkal, who served as Ukraine’s deputy foreign FM between 2014 and 2019, told the Atlantic Council’s Ukraine Alert blog.

“Faced with the coronavirus crisis and attendant economic recession, President Zelensky is desperately seeking to stop the steep decline in his, his government’s, and his parliament’s popularity. He believes he needs a game-changer and thinks this concession will bring peace. It will not,” Adrian Karatnycky, a senior fellow at the Atlantic Council highlights, adding that “the recognition of the Russian-controlled quisling authorities in eastern Ukraine as legitimate negotiating partners, and of Russia as a guarantor of peace, serves to reduce pressure on Russia by suggesting it is not the aggressor” and this move “will only weaken and may ruin Ukraine’s chances in international courts, where it has pursued Russia as the aggressor and occupying force in the Donbas region.”

Discussing a historic comparison with the situation of East Germany, Andreas Umland, a senior fellow of the Institute for Euro-Atlantic Cooperation, says that even recognition of the socialist German Democratic Republic, which would be seen as “a complete capitulation” in today’s Ukrainian terms, did not prevent the country from disappearing.

“These compromises are not endgames,” he argues.

Even during a global emergency, Russia’s disinformation campaign continues
Air pollution in CEE has a high economic and human cost
Comment