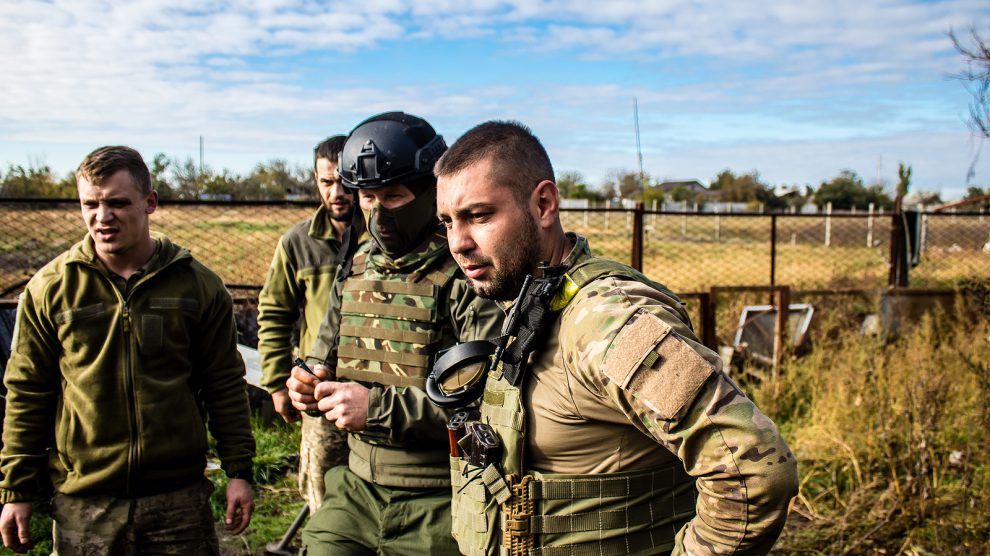 Russia on Wednesday announced that it was pulling out of much of the Ukrainian region of Kherson, including the region’s capital, the only regional capital captured by Moscow since it began its full-scale invasion in February.

The order to retreat to the left (or eastern) bank of the Dnipro River, given by the Russian Defence Minister Sergei Shoigu and General Sergei Surovikin, the recently appointed commander of Russia’s forces in Ukraine, comes as Ukrainian forces continue to attack Russian positions on the western side of the river.

Russia has for some time been deporting civilians from Kherson (Moscow calls it an “evacuation”), while its Russian-appointed administrators left the city last week.

Ukraine, which has responded to the announcement with caution, remains circumspect. President Volodymyr Zelensky was wary, saying that “the enemy does not bring us gifts” and “does not just leave”. He said that Kherson and other occupied areas would be retaken by Ukraine but as a result of Ukrainian military efforts, “we need to fight our way”.

A senior Ukrainian official has warned that Russia is booby-trapping the city, accusing them of trying to turn it into a “city of death”.

Mykhailo Podolyak, adviser to the head of the office of Ukraine’s president tweeted that Russia “wants to turn Kherson into a ‘city of death'”.

He claimed that the Russian military “mines everything they can: apartments, sewers” and that “artillery on the left bank” of the Dnipro “plans to turn the city into ruins”.

On Wednesday, Ukrainian Prime Minister Denys Shmyhal said he saw no need at present to evacuate Kyiv or any other cities that are not near the frontlines in the war against Russia.

He made his comments at a cabinet meeting following Russian attacks on Ukraine’s energy system, and after the mayor of Kyiv told residents to consider everything including a worst-case scenario where the capital loses power and water completely.

“Right now, the situation is far from [needing to] announce an evacuation,” Shmyhal said. “We must say that to announce the evacuation of any city not near the front lines, especially the capital, would not make any sense at present.”

Russian President Vladimir Putin will not attend the G20 summit in Bali next week, the Russian embassy in Indonesia told CNN on Thursday.

Putin will be represented by Russian Foreign Minister Sergey Lavrov, said Yulia Tomskaya, the chief of protocol at the embassy.

Tomskaya added that Putin is still deciding if he will join one of the meetings virtually.

Putin’s decision not to attend the G20 summit in person saves him the embarrassment of being confronted — or shunned — by other world leaders over Russia’s invasion of Ukraine.

The secretary of Ukraine’s security council said on Tuesday the “main condition” for the resumption of negotiations with Russia would be the restoration of Ukraine’s territorial integrity.

Other news from around emerging Europe

The US will finance about a third of the nine billion US dollars Romania needs to build two new nuclear reactors, the latest Eastern European project using American support to boost energy security. Romania will get an initial 50 million US dollars loan from the US Export-Import Bank to cover preliminary work on the reactors at the Cernavoda plant, a process expected to be completed in 2025, while another loan of about three billion US dollars will be granted by the Washington-based export credit agency for actual construction, which is expected to finish in 2030.

Europe’s top rights court on Tuesday ruled that Romania discriminated against a potential military recruit by refusing to allow her to sit for an entrance exam because she was too small. The European Court of Human Rights sided with Elena Moraru, ruling that Bucharest had no scientific or research-based rationale for barring the now-23-year-old from taking an entrance examination for military medical school.

Grocers in Hungary will be ordered to sell eggs and potatoes at prices no higher than they were at the end of September, a government minister announced on Wednesday, part of an effort to ease the burden of skyrocketing prices in the Central European country. The cap on egg and potato prices adds to a list of several other grocery items — including granulated sugar, wheat flour, sunflower oil, pork legs, milk and several chicken products — that have had price ceilings in Hungary since February.

Hundreds of ethnic Serbs rallied in Kosovo last Sunday as a dispute over vehicle license plates heightened ongoing tensions between Belgrade and Prishtina. The government’s decision to gradually ban Serbia-issued license plates has angered Kosovo Serbs, most of whom live in the north of the country and do not recognise Kosovo’s 2008 declaration of independence. Kosovo’s demands that police begin to issue warnings to those who continued to use Belgrade-issued licence plates has led to hundreds of ethnic Serbs, including police officers and judges, resigning their government jobs in protest.

European Union Commission President Ursula von der Leyen paid an official visit to Moldova on Thursday, where she announced a 250 million euros support package to help the small nation overcome an acute winter energy crisis amid Russia’s war in Ukraine. The EU chief said that Moldova, which neighbours Ukraine, will receive 100 million euros in grants and the same amount again in loans from the 27-nation bloc to help it meet its gas needs this winter, starting January 1. An additional 50 million euros will help the country’s most vulnerable citizens, she said.

Polish start-up Airly, which provides local authorities and businesses with air quality data, has just raised a 5.5 million US dollars Series A led by the UK’s firstminute capital and Pi Labs, with participation from angel investors like British entrepreneur Sir Richard Branson, Slack’s cofounder Cal Henderson and Snowflake cofounder Marcin Żukowski. Poland, like some other coal-dependent countries from Central and Eastern Europe, has a longstanding problem with poor air quality.

Danske Bank’s former chief executive Thomas Borgen was cleared by a Danish court on Tuesday of any liability for shareholder investment losses linked to the lender’s involvement in one of the world’s largest money-laundering scandals. A group of 155 institutional investors suing Borgen had demanded 2.4 billion Danish crowns (322 million US dollars) from him, alleging he failed to disclose information about suspicious payments funnelled through Danske Bank’s former Estonian branch.

Turkish security forces on Tuesday arrested two suspects in connection with the fatal shooting of a Bulgarian police officer at the border with Turkey. Bulgarian Interior Minister Ivan Demerdzhiev said the officer was killed by gunfire from the direction of a group of migrants trying to cross into his country from Turkey. In a statement, the governor’s office in Turkish border province Edirne said a shotgun and shells used in the shooting were found in the possession of the suspects.