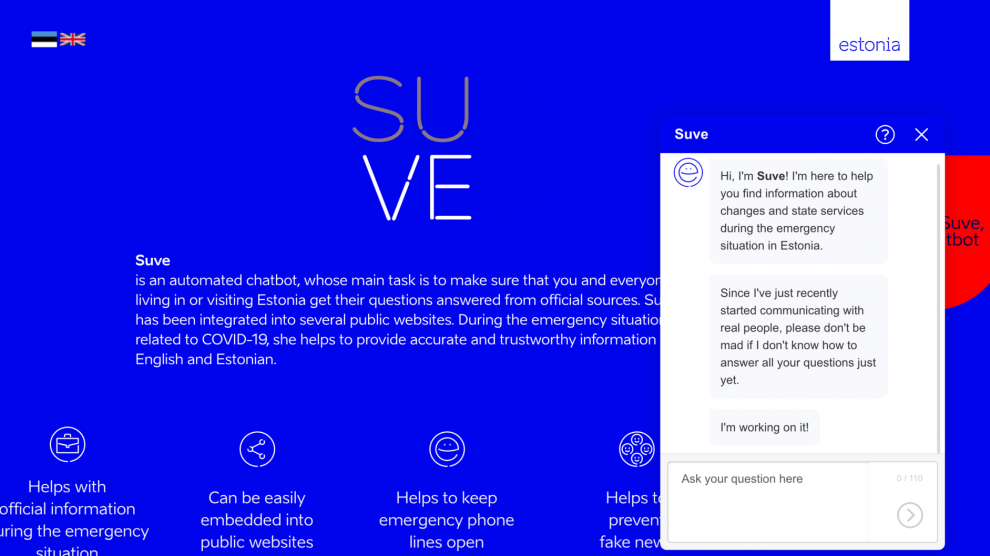 Born as part of Hack the Crisis, an event organised by Garage48 and Accelerate Estonia as part of Estonia’s start-ups’ plan to hack the Covid-19 crisis, chatbot Suve is already one of the most knowledgeable sources of information in the Baltic state.

Driven by artificial intelligence, Suve helps Estonians and foreign residents of the country find official information about the coronavirus situation, keeping emergency phone lines free for those in the most need.

Available in both Estonian and English, Suve guarantees trustworthy and accurate information, also helping to combat the spread of fake news.

Easily embedded on public websites, Suve is already operating on the webpages of the Estonian government, the health board, the ministries of social affairs, justice, and culture, the consumer protection and technical regulatory authority, Work in Estonia, the International House of Estonia, Invest in Estonia, TV3, the North Estonia Medical Centre and Corona Map. Suve is being added to more platforms all the time.

Michaela Snopkova from Work in Estonia – which helps highly-skilled people from around the world settle in the country – is the head of the eeBot team behind Suve, a group of people which includes IT and marketing specialists, as well as others whose competencies include providing relocation and integration help to foreigners in Estonia, promoting foreign direct investment, and dealing with environmental issues.

“The Estonian government has had a similar idea for quite some time now, to create a virtual assistant who would be reactive but also proactive when communicating with citizens and residents,” she tells Emerging Europe. “In parallel, we at Work in Estonia and the International House had planned to this year create an automated solution to answer FAQs from the international community and the top specialists coming to Estonia for work. The Covid-19 crisis just speeded things up a bit.”

Snopkova says that the number of queries Suve has to deal with varies day by day, depending on how many new pages Suve has been connected to.

“Since the moment Suve went online on the webpage of Estonian government on the evening of March 19, she has held almost 11,000 conversations and sent more than 29,000 messages. At the moment, Suve speaks Estonian and English, but we also have Russian conversations, and Suve will speak fluent Russian in a few days,” adds Snopkova.

So successful has Suve been that Snopkova says she is here to stay, beyond the end of the coronavirus crisis. Her future role could see her taking care of passport applications and other administrative duties.

“The government put in place a new info system last week, which is already used for managing crisis-related FAQs from all relevant organisations/stakeholders and which is also connected to Suve. In the upcoming days and weeks, all state organisations and entities of the state, as well as local authorities, will get access to this info system in order to add their regular, non-coronavirus FAQs. Suve will be trained to answer these as well. So yes, we are not talking about a ‘hackathon’ idea anymore. Suve is now a fully operational and viable way for the Estonian state to communicate with its citizens and residents,” Snopkova concludes.