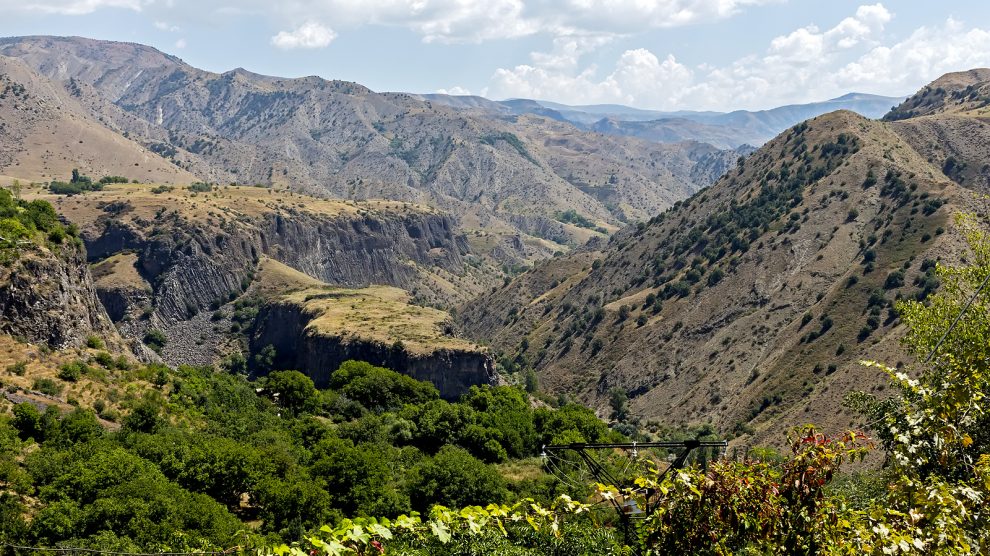 The Armenian government is caught between a rock and a hard place as it tries to mediate between environmental activists and an international mining company.

For years, Lydian Armenia, a subsidiary of Jersey-registered mining company Lydian International, had been trying to set up a gold mining operation at Amulsar in the south of the country, much to the chagrin of locals and environmentalists.

Following Armenia’s so-called Velvet Revolution of 2018, which swept a reformist government, led by Nikol Pashinyan, into office, protesters had felt emboldened and subsequently blockaded the site, setting up mobile homes on the road to prevent any heavy machinery from passing through.

Last year, Lydian Armenia hired a private security company to begin removing the mobile homes. This led to fistfights and clashes between protesters and private security forces, requiring the intervention of the police. Dozens were arrested.

Now, more than a year on from this “battle”, the dispute continues, with little hope of a resolution in sight.

Lydian Armenia first discovered the gold deposits in Amulsar in 2005. In 2012, the company signed an agreement with the Armenian government – then led by the controversial Serzh Sargsyan – to begin exploiting the resource. According to some estimates, the company has already invested 400 million US dollars into the project, despite not even starting actual mining operations.

According to Armenia’s Ministry of Economy, the mine, when fully operational, can raise Armenia’s GDP by up to 1.14 per cent in just its first year.

However, plans for the mine have from the start been met with opposition from environmentalists. Their main concern revolves around the potential use of cyanide in gold mining. According to chemist Oksana Kharchenko, cyanide is widely used in gold mining operations around the world because of how easily it combines with metals.

“Cyanide is used to leach gold from ore,” she says. “This means that by applying a cyanide solution over a pile of ore, miners can extract just the gold. Of course, because cyanide is poisonous, if large quantities find their way into water sources, for example, this could cause major negative effects to people’s health.

Located in the Arpa and Vorotan river valleys, ecologists say that the Amulsar mine carries a major risk of pollution. This in turn would have a major impact on the ecosystem of Armenia’s iconic Lake Sevan.

Amulsar is not the first time that the use of cyanide in gold mining has stirred controversy in Central and Eastern Europe.

In Romania, a decades-long dispute between environmentalists and a mining company, Gabriel Resources, which wanted to mine gold in the ancient Roman mining town of Roșia Montană, was only resolved in 2020 when Romania applied to UNESCO to protect Roșia Montană as a World Heritage Site. (Roșia Montană was added to UNESCO’s list in July of this year).

Much of the opposition to mining at Roșia Montană stemmed from a large cyanide leak which occurred at an Australian-owned gold mine in northwestern Romania in 2000. Over one million cubic metres of cyanide-contaminated waste spilled into the Tisza and Danube rivers, killing fish and poisoning water supplies for hundreds of kilometres downstream, even affecting neighbouring countries Hungary and Serbia.

Earlier this year, Kyrgyzstan was also in the headlines for its attempts to nationalise the Kumtor gold mine, the largest in the country, for persistent reports of environmental violations by the mine’s Canadian owners. The most serious was in 1998, when a truck carrying two tonnes of sodium cyanide crashed into the Barskoon river, dumping its load into the water. Around 2,000 people were hospitalised in the aftermath.

In Armenia, one of Pashinyan’s first acts as prime minister was to commission Lebanese company ELARD to investigate the potential negative impact of the Amulsar mine. A report was produced concluding that there were significant areas where Lydian’s environmental protection measures fell short, but that the possible impact on nearby water sources – including Lake Sevan – was nil.

Pashinyan put a positive spin on the report and used it to give the project the green light. However, following protests and much opposition from Armenian civil society, who claimed that the report in fact made it clear that the mine would cause environmental damage, he changed his mind just two weeks later, saying that his government would continue to study whether the mine would in fact be safe for the environment.

Back to square one, the standoff continued.

The Armenian government now finds itself in a difficult position. It is reluctant to ignore the very persistent demands of the protesters, particularly as his government portrays itself as more open, democratic and consensus-based than its predecessors.

However, at the same time, acquiescing to the demands of the protesters could hurt investors’ confidence in Armenia.

The country already lacks foreign capital and can scarcely afford to scare away other potential investors. Furthermore, halting the project, after Lydian Armenia has already spent hundreds of millions of dollars, could open the door to the company taking legal action against the Armenian government and demanding compensation.

It will no doubt be aware that Gabriel Resources has filed a 4.4 billion US dollars arbitration claim against Romania for alleged investment treaty violations in relation to the Roșia Montană project.

Pashinyan and his government have been largely silent on the issue for the past two years, although last month Deputy Prime Minister Suren Papikyan did say that he was “inclined to operate the mine”.

He added, however, that “it’s rather difficult to say when the Amulsar gold mine will be opened”.