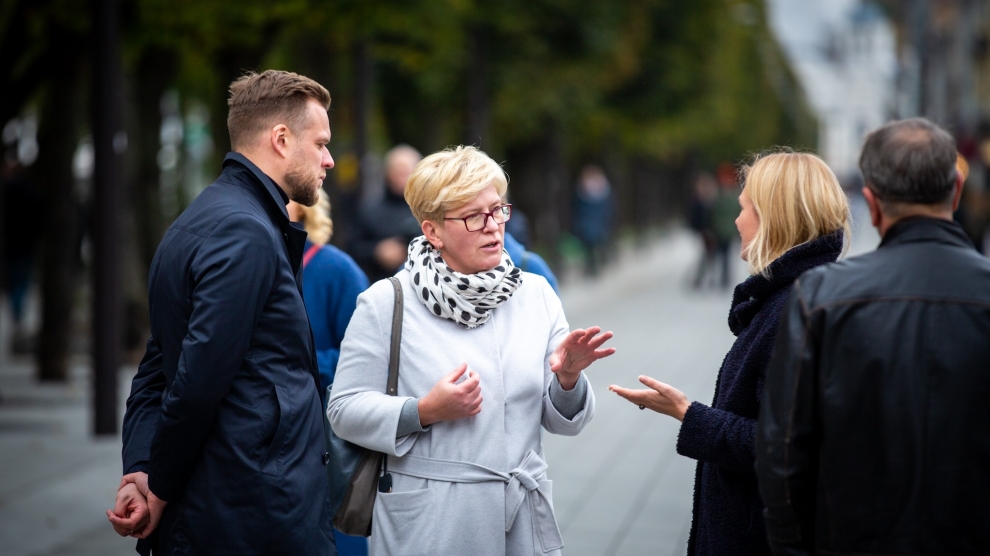 Ingrida Šimonytė (pictured above, centre, on the campaign trail) is likely to be Lithuania’s next prime minister after her party, the Homeland Union, clearly won the country’s parliamentary election.

After two rounds of voting, the second of which was held on October 25, the Homeland Union won 50 seats, while its partners, the Liberal Movement and the Freedom party, took 13 and 11 seats each, respectively. The 74 seats that they hold together will offer them a small majority in the 141-seat parliament. In a joint declaration issued on Sunday night, the leaders of the three parties said they were ready to form a cabinet led by Mrs Šimonytė.

The outgoing ruling party, the Farmers and Greens, won just 32 seats while their erstwhile coalition allies — the Social Democrats and the Labour party — got 13 and 10 seats respectively.

With both the Liberals and the Freedom party also led by women, Lithuania now looks set to be governed by a triumvirate of female politicians, a welcome change for a country that has been criticised in the recent past for having the only all-male cabinet in the European Union.

Former President Dalia Grybauskaitė called the election results: “The best thing that could have happened to Lithuania during this difficult time”.

“We voted for the future and left behind us the politics of revenge, lies and denials,” the former president said. “These three parties have led women to victory. Women are not afraid to take responsibility in difficult times.”

The new government’s first task will be to tackle the second wave of the Covid-19 pandemic.

While Lithuania, as with the other Baltic states of Estonia and Latvia, have dealt relatively well with the pandemic, the country reported 766 new coronavirus cases on Monday, the highest daily increase so far. The country’s death toll from the virus since the beginning of the outbreak now stands at 136. The outgoing government had come under criticism for its handling of the second wave, particularly its delay in reintroducing lockdown restrictions which were finally put in place on October 26, only after the second round of voting. Twelve of Lithuania’s largest towns and cities, including Vilnius, Kaunas and Klaipėda will be quarantined from Wednesday for a period of two weeks. Mask-wearing be mandatory for all persons over the age of six in all public places across the country.

During the campaign, Šimonytė fiercely criticised Prime Minister Saulius Skvernelis’s government and she said she will seek more expert advice.

“We need to change the crisis management model because we lack transparency and clarity about who gives advice to the government and who has the final word,” she said.

“We hear from the medics and scientists that they are not listened to.”

Taxes, both income and VAT, currently amongst the highest in the EU, are also likely to be reduced, although doing say may not be possible immediately as the country comes to terms with the economic fallout of the pandemic. Unemployment has risen from nine per cent in February to over 14 per cent in September, while the outgoing government’s draft 2021 budget anticipates a deficit of four billion euros.

“In the wake of the 2008 crisis, when we couldn’t borrow money, tax rates were raised and have not been lowered despite the fact that we were told the increase was temporary,” said Simonas Gentvilas, the vice-chairman of the Liberals. “Our position is that these temporary taxes must return to their previous rates.”

A cut in the personal income tax rate would help solve long-term unemployment issues in regions outside Vilnius and other major cities, added Gentvilas.