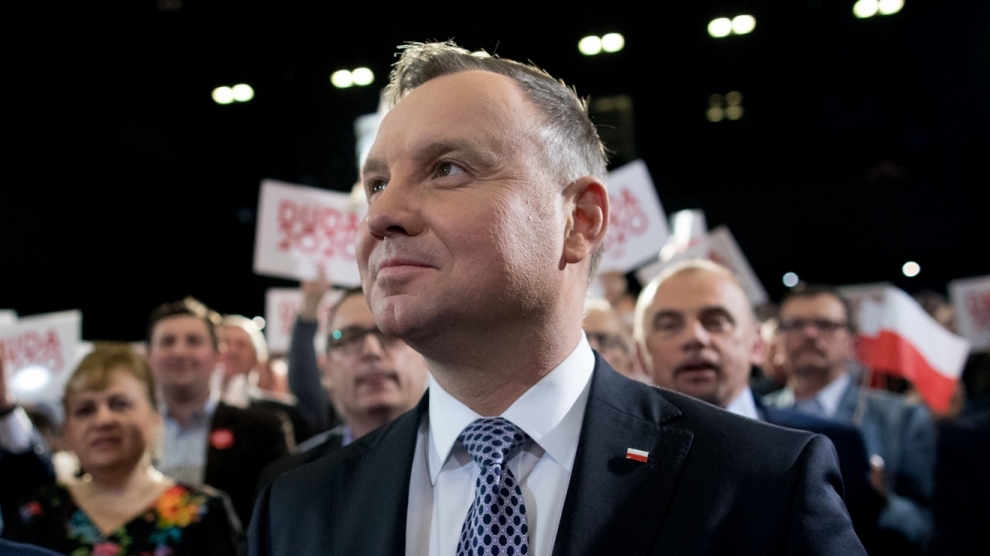 As incredible as it may seem in the current climate, with most of Europe on lockdown and national elections cancelled in Serbia and North Macedonia, Poland appears determined to go ahead with its presidential vote, set to be held on May 10. A second round, if needed, would take place two weeks later.

Unsurprisingly, the rapid progression of Covid-19 has created an air of uncertainty amongst candidates, who have been left unsure if campaigning – itself made almost impossible by a ban on public gatherings – should be limited to the coronavirus response or if there is still a need to discuss regular policy issues.

Many are calling for the election to be postponed. Opposition candidates and their supporters have voiced concern over the safety of having the public head to the polls in the midst of a pandemic, as well as the perceived unfair advantage the constraints on campaigning offers the incumbent, Andrzej Duda.

As Kasia Szczypska of the Open Dialogue Foundation in Brussels tells Emerging Europe, “The election should be postponed. This would allow for more of a level playing field.”

However, the leader of Poland’s ruling Law and Justice party (PiS) Jarosław Kaczyński is holding the line, declaring it “too early” to call for a postponement. Indeed, in an interview on March 21, Mr Kaczyński insisted the vote should go ahead. “It would be extremely unfavourable for the president and prime minister to be from various political camps and argue. Today, among other conditions, we need effective crisis management and political stability. This is the reason why these elections should be held on May 10,” he said.

Voters will need some convincing. The tabloid SuperExpress recently conducted a poll that showed 70 per cent of voters currently oppose a May 10 election, with only 12 per cent in favour.

The former prime minister and president of the European Council Donald Tusk has also joined the ranks of those calling for postponement, calling the election a risk to public health and safety. “Only a madman or a criminal would propose people head to the polls at this time,” he says. He also points out that the winner would likely face a lack of legitimacy, as low voter turnout and the unprecedented conditions could easily see any victory challenged in court.

The grounds for the postponement of the election would likely be through the declaration of a state of emergency. Poland has taken considerable measures to combat the outbreak but has so far declared merely a ‘state of epidemic emergency’.

“Even Vladimir Putin has just postponed the constitutional referendum that would allow him to stay in power until 2036. Meanwhile, for now, Kaczyński stubbornly keeps his political plan on track despite the deadly virus,” Ms Szczypska tells Emerging Europe.

Some candidates are considering a boycott in protest, and withdrawing from the election completely. However, the chance of such a diverse array of candidates taking part in a uniform action such as this is slim. Moreover, PiS is currently trying to ram emergency measures through parliament to cope with the outbreak and playing hardball with this legislation could make the opposition appear irresponsible at a critical time.

The timing of the election is critical for PiS, and while it seems increasingly likely that it cannot go ahead, waiting too long to postpone it could be seen as losing trust in dealing with the pandemic. If it is postponed, candidates will need to play the long game against Mr Duda, and many issues are likely to arise as candidates and their policies have time to simmer in the current social upheaval.

According to Polish political commentator Martin Mycielski, “The main battle-lines will likely run over the amount of power we wish to grant the ruling party – whether we want to let it reign freely or restrain its grasp. Reelecting Duda will give PiS both a moral and a practical mandate to continue their path of curtailing liberal democracy and abolishing the balance of powers, while electing an opposition candidate will send a signal that Poles’ trust in the party is running out and they wish to keep it in check.”

It is clear that this election, at least partially, serves as a litmus test for PiS’s, coming after the party’s limited victory in the 2019 parliamentary (Sejm) elections. Mr Mycielski says that “even PiS’s staunchest supporters don’t see Andrzej Duda as an independent head of state. They seem to embrace the fact that he’s little more than a puppet in Kaczyński’s hands.” He also tells Emerging Europe that “it’s therefore only natural to assume that by supporting him they also condone the vision that PiS has been building – or the old order they’ve been destroying – depending on where you stand.”

According to Mr Mycielski, the election – beyond coronavirus – will follow similar lines as last year’s Sejm election, such as attitudes towards the EU, which Mr Duda has infamously labelled “an imaginary community with few benefits”; the lines between liberal and conservative values, in particular the role of the Catholic Church; and PiS’s economic and social welfare programmes.

One recent issue that could further influence voters is Mr Duda’s approval of a two billion zloty annual budget for state media companies, labelled by many opposition figures as little more than propaganda machines.

The ruling party’s worrying judicial reforms have featured prominently in recent years, causing uproar amongst liberals and bringing Poland into conflict with the European Commission. However, Ms Szczypska believes that this will not play a big role in influencing voters.

“Firstly, the opposition has largely failed to build a coherent narrative about how the hostile PiS takeover of state institutions, most notably the judiciary, can affect the life of every Pole. Secondly, so far at least, PiS’s support is largely immune to scandal, even though recent years have seen a plethora of these unfolding.”

Furthermore, many Poles perceive the judiciary reforms as a sign of EU interventionism, something which has both polarised and confused society, according to Mr Mycielski, who suggests that “many Poles might feel a bit of cognitive dissonance, favouring European integration and being aware of the EU’s benefits, yet sharply rejecting its ‘meddling’ in what they believe is an internal Polish issue.”

Despite a slight recent shift in polling in favour of Mr Duda, he still sits just below an outright majority needed to win in the first round. Who will face him in the second round is where the contest gets interesting.

According to current polling Civic Coalition’s (KO) candidate Małgorzata Kidawa-Błońska is favourite, on 22 per cent. She is not expected to defeat Mr Duda in the run-off, but as Mr Mycielski points out, “the polarisation in society and opposition towards PiS seems so strong that even the votes for the far-right candidate, Krzysztof Bosak, might largely jump all the way over to the liberal opposition.”

Though at this stage it remains unlikely, Mr Duda’s loss would carry heavy symbolic and tangible consequences for PiS. As Ms Szczypska notes, it would break the ruling party’s winning streak of five different electoral contests. A loss would therefore send shockwaves through the party and be a poignant illustration of the public’s dissatisfaction with PiS rule, perhaps even a change in the tide of the current political landscape.

Ms Szczypska continues, “More importantly, however, Duda’s defeat would stop PiS’s infamous legislative juggernaut with laws fundamentally altering the hitherto institutional arrangements being passed literally overnight. So far, efforts to derail PiS’s legislative initiatives were easily overridden by the party. The Senate, in the hands of the opposition for a few months now, can only water them down by delaying legislative proceedings. Given the power of the presidential veto, however, a president from the opposition will be able to obstruct PiS’s disruptive legal extravaganza.”

Nobody else has a real chance

Other candidates, which Emerging Europe has looked at here, represent a diverse and divided political society, yet all are vying to unite the country.

Notably, Robert Biedron is the first openly gay candidate to contest the presidency in Poland. In light of the hostile and discriminatory treatment towards the LGBT community in Poland over the past year, which has culminated in a third of polish municipalities declaring themselves ‘LGBT-free zones’ and leader of the ruling PiS party, Jaroslaw Kaczynski denouncing LGBT rights as ‘a threat’ to the traditions of the country, Mr Biedron’s candidacy could be a significant marker of a changing generation entering Polish politics.

However, many feel disillusioned with Biedron’s policies, modelled on Emmanuel Macron’s En Marche party, as “he didn’t deliver on his promise to shake up and revitalise Polish politics, and, worst still, with his party’s support swooping down, he chose the comfy chair of an MEP over leading his party in parliament,” says Ms Szczypska. Even some of his supporters are beginning to question his political motivations.

As Mr Mycielski furthers, “For many on the left, Biedroń turned out to be a disappointment. Hopes in him were through the roof long before he launched his Wiosna (Spring) political project. Many mainstream liberals saw in him a Polish Macron, choosing to overlook his leftist views. I was one of them. I know Robert personally, and as much as I applaud his incredibly tough journey as an LGBT politician in a deeply conservative society, I’m afraid we’ve set our expectations a bit too high and fooled ourselves into believing he’s all us liberals would wish him to be.”

Looking at the broader picture, it will be interesting to see how the presidential election plays out within the context of the region’s wider political trends. Significantly, if the country will continue to follow the path towards anti-establishment right-wing populism, as seen in neighbouring Hungary.

However, Ms Szczypska sees the race as a more specific referendum on PiS’s economic policies, which currently feature a wave of welfare benefits and tax exceptions for targeted groups. “PiS has rule brought a paradigm shift in the Polish politics, ushering in a new era of the welfare state. To many Poles, this vote will be about continuing this course. In this sense, Poland follows the worrisome global trend of populist momentum with its reckless economics.”

Mr Mycielski further notes the trend of the far-right to ‘cuddle up’ to other fellow European extremists. “They proudly march with the Italian Forza Nuova or – as was recently revealed – organise clandestine support campaigns for the French National Rally. They see their strength in working with other – sometimes fringe – parties around Europe, wishing to sabotage the EU – ironically – through their pan-European cooperation and synergy. That’s where I’d see the election following European trends the most.”

Should it take place, this is possibly the most important presidential election in Polish history, held in the midst of a global pandemic looms with a diverse field of candidates vying for the top job. It will tell the world the path Poland wishes to take as it moves forward.

Emerging Europe’s hardened seniors are ignoring the threat of coronavirus. Can we blame them?
Coronavirus makes the need for a clear EU strategy towards the Western Balkans ever more pressing
Comment