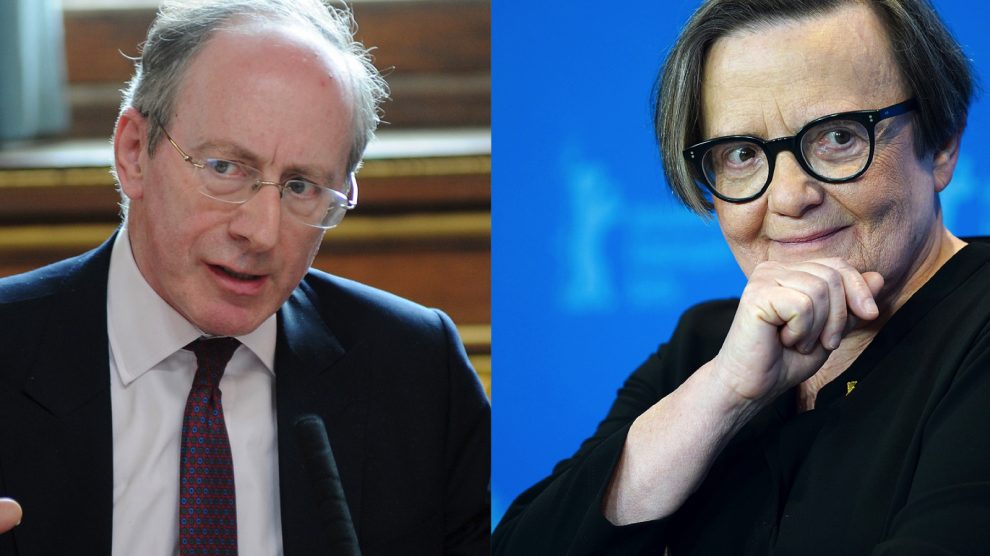 Two leading figures from the world of international diplomacy and films have been named as the winners of Emerging Europe’s Professor Günter Verheugen and Princess Marina Sturdza awards for 2022.

The Professor Günter Verheugen Award, given to eminent individuals from outside emerging Europe who have contributed to the region’s prosperity and peace, has this year been given to Sir Malcolm Rifkind, former UK Foreign Secretary, while the Princess Marina Sturdza Award, given to eminent individuals the region who have contributed to its prosperity, science, culture and peace, goes to Polish film director Agnieszka Holland.

The laureates of the two awards are chosen by the Emerging Europe Council, whose members are leading opinion formers, senior business executives, scholars, former senior representatives of international organisations, civil society and the world of diplomacy and art.

Previous laureates include Professor Günter Verheugen, a former vice-president of the European Commission, Kristalina Georgieva, managing director of the International Monetary Fund, Carl Bildt, a former prime minister of Sweden, and Professor Katalin Karikó, whose work formed the basis of the Covid-19 vaccine.

Sir Malcolm Rifkind, who will be speaking with Emerging Europe’s Andrew Wrobel at next week’s awards ceremony in Brussels, was throughout his lengthy and distinguished career a staunch friend of the countries of emerging Europe, partly for personal reasons.

“I was incredibly touched and moved to discover I would receive this award,” Sir Malcolm tells Emerging Europe. “I have always had a special interest in the countries of Central and Eastern Europe: my grandparents left what is now Lithuania, then part of the Russian Empire, in 1899. My roots are there.”

As a junior minister of state in the foreign office in the early 1980s he held responsibility for UK relations with Central and Eastern Europe and the Soviet Union, visiting the region on numerous occasions – perhaps most memorably Poland in 1984, where he met with representatives of the (then banned) Solidarity movement, but not the country’s leader, General Jaruzelski.

Later, after the fall of communism, Sir Malcolm became an advocate for swift European Union expansion to the east. He had been involved in the early stages of creating the European Single Market, and was well aware of the benefits it could bring to the countries of emerging Europe.

In 2014, by then chairman of the UK parliament’s Intelligence and Security Committee, Sir Malcolm was deeply critical of the muted western response to Russia’s invasion of Ukraine’s Crimea and Donbas regions in 2014, warning that robust economic sanctions needed to be introduced as a deterrent.

It was a prescient point of view: most western policy makers now agree that if meaningful action had been taken against Russia in 2014, it would not have been in a position to launch a full-scale invasion of Ukraine in February 2022.

Agnieszka Holland is one of Europe’s leading filmmakers. Born in Poland in 1948, her films have often tackled Europe’s complex history, including the Academy Award-nominated Angry Harvest, Europa Europa, and In Darkness.

Holland witnessed the Prague Spring of 1968 while in Czechoslovakia, and was arrested for her support of the dissident movement. She has described her time in Prague as her “introduction to politics, violence, beauty, art, marriage, film and other arts…everything that happened after was based on this Czechoslovak experience”.

She began her career as an assistant director for Polish film directors Krzysztof Zanussi and Andrzej Wajda, while her first major work was Provincial Actors, a 1978 chronicle of tense backstage relations within a small-town theater company which was an allegory of Poland’s contemporary political situation. It won the International Critics Prize at the 1980 Cannes Film Festival. She fled Poland for France in 1981, shortly before the imposition of martial law.

One of her most recent films, Mr Jones, released in 2019, tells the true story of a Welsh journalist who exposed the terrible famines in Ukraine under Stalin.

Just last month Holland, in her capacity as president of the European Film Academy, criticised the Cannes Film Festival for including a Russian entry, Tchaikovsky’s Wife, in this year’s main competition.

The film was directed by Kirill Serebrennikov and partly financed by the sanctioned Russian oligarch Roman Abramovich.

The Emerging Europe Awards 2022 is the fifth edition of a programme which showcases the best of the region: individuals, public and private organisations as well as projects and initiatives.

The 2022 edition will take place in Brussels on June 23

Earlier this year, Moldovan President Maia Sandu was named Emerging Europe’s Public Figure of the Year for her commitment to democracy and the rule of law, and to the fight against corruption in Moldova.

‘By the book’: From here on in, Ukraine and Moldova should expect no special treatment from the EU
Europe’s leaders visit Kyiv: Emerging Europe this week
Comment