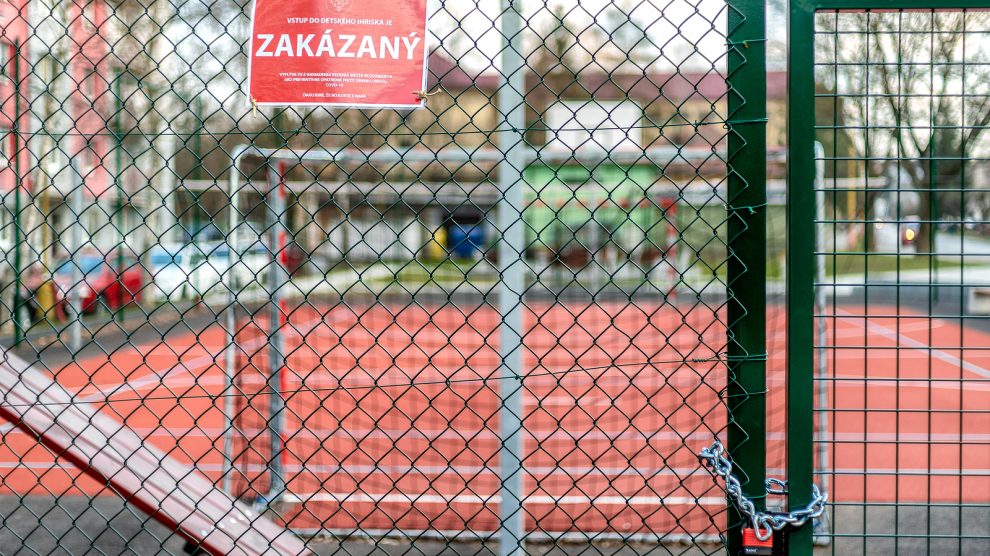 Slovakia has imposed a strict lockdown, including a curfew, as it is struggling to curb one of the world’s worst Covid-19 outbreaks. The government approved a state of emergency starting on Thursday and closed most retail businesses for at least two weeks, Prime Minister Eduard Heger said. Residents can only leave their homes to go to work or school and to visit essential shops and services. Fewer than a half of Slovakia’s 5.5 million people are fully vaccinated, and the ex-communist country registered a record 10,315 new infections on Tuesday.

A bus carrying tourists back to North Macedonia crashed and caught fire in western Bulgaria early Tuesday, killing at least 45 people, including a dozen children, authorities said. DNA tests were being carried out to identify the victims. The bus apparently ripped through a guardrail on a highway, though authorities said the cause was still under investigation. Photos taken shortly after the crash showed the vehicle engulfed in flames as plumes of thick, black smoke rose.

France assured Poland of European Union support in its stand-off with Belarus on Wednesday, but reminded Warsaw it needed to resolve a row with the bloc over its values and the rule of law. In a meeting with Polish Prime Minister Mateusz Morawiecki, French President Emmanuel Macron reaffirmed his solidarity with Poland, but reiterated concerns over the rule of law and “called on the Polish government to find a solution that safeguarded the core values of the European Union”.

Recent Polish rate hikes should help the złoty, central bank governor Adam Glapinsk said in comments published on Wednesday, adding that the situation in Poland was not comparable to Turkey, where the lira has crashed. The złoty has been hovering around 12-year lows in recent days, under pressure from a stronger dollar as well as worries about increasing numbers of COVID-19 cases and the migration crisis on the Belarus border.

Romania’s parliament on Thursday voted to endorse a new coalition government led by retired General Nicolae Ciuca, ending a months-long political crisis. The unlikely coalition comprises the Liberals and the Social Democrats, as well as the Union of Hungarians in Romania. The Social Democrats, however, will hold the most cabinet posts, including the key finance ministry.

The European Court of Justice (ECJ) has ruled that judges in EU member countries are entitled to seek advice from the bloc’s top court and cannot be subjected to disciplinary action for doing so. The November 23 ruling was made in the case of a Hungarian judge who was subjected to disciplinary measures for requesting advice from the ECJ about the required competencies of interpreters in cases involving foreign nationals accused of crimes. Hungary’s Supreme Court declared the judge’s request unlawful and placed him under a disciplinary process.

The Ukrainian government approved on Wednesday an agreement with NATO member Romania that creates a legal framework for deals to buy weapons and military equipment, a televised government meeting showed. The framework agreement had been signed with Bucharest last year but needed the government’s approval to take effect.

Also on Wednesday, Russia staged military drills in the Black Sea, south of Ukraine, and said it needed to sharpen the combat-readiness of its conventional and nuclear forces because of heightened NATO activity near its borders. Ukraine, which with its ally the United States has said it believes Russia may be preparing an invasion, staged exercises of its own near the border with Belarus.

Exiled Belarusian opposition leader Svetlana Tikhanovskaya has called on the EU to do more to help Belarusians, whom she called “forgotten Europeans,” in their fight for freedom. Speaking at the European Parliament on November 24, Tikhanovskaya talked about the arrest and incarceration of opposition politicians and activists in Belarus. She also emphasised that the ongoing migrant crisis along her country’s border with three EU members – Poland, Latvia, and Lithuania – shows that the struggle for freedom in Belarus is linked with the fight for freedom in Europe in general.

Armenia’s former president Serzh Sargsyan has been charged with taking a bribe, an accusation his lawyers say was made to distract from a security crisis on the Azerbaijani border. On November 22, Sargsyan’s lawyer posted on social media that he had received a notice that his client had been formally charged with taking a substantial bribe as an official. The charges were brought in connection with a sprawling investigation covering the infamous events of March 1, 2008 – when protests against a fraudulent election were violently broken up.

The European Union must make it clear to Russia that there would be a high price to pay if it acted against Ukraine, Estonian Prime Minister Kaja Kallas told Reuters on Wednesday, urging the bloc to quickly agree on how to deter Moscow. “We share the concern about the Russian military build-up around the Ukrainian border,” Kallas said in an interview after talks in Paris with French President Emmanuel Macron. “It is therefore very important that we are clear on the European side that the price of taking any steps towards Ukraine will be so high that it will act as a deterrent and make Russia reconsider.”

Lithuania will adapt to “short-term” economic pain dealt by China over its moves to enhance ties with Taiwan, foreign minister Gabrielius Landsbergis said on Wednesday, while urging Europe to brace against Beijing’s economic “coercion” by getting more involved in the Indo-Pacific. China downgraded diplomatic ties with Lithuania on Sunday over the Baltic country’s move to allow self-ruled Taiwan to open a de facto embassy there. Lithuania has formal relations with China and not Taiwan.

MEPs have warned the current situation in Bosnia and Herzegovina could reignite a civil war in the country. The warnings came amid a European Parliament debate over plans by Milorad Dodik – the current Serb president of the tri-presidency of Bosnia and Herzegovina – to separate his region from the state. Serbs have for years been advocating the separation of their mini-state from the rest of Bosnia.

Bosnian utility company Elektroprivreda meanwhile has warned of “increasingly uncertain” power supplies to customers amid strikes by thousands of coal miners over work and pay. State-owned Elektroprivreda Bosnia-Herzegovina’s director, Admir Andelija, told reporters on Wednesday that the company had already been forced to shut down two units at a thermal power plant in Tuzla, in the north of the country.

About 2,000 protesters rallied in Belgrade on Wednesday over the planned adoption of laws on expropriation and a referendum they say is designed by the government to help investors speed up their mining projects in Serbia. To speed up economic growth, Belgrade has offered mining resources to foreign companies, including China’s Zijin copper miner and Rio Tinto, despite opposition by some residents and environmentalists who say ore exploration would further increase pollution.

Albania has rejected claims that it will process asylum seekers crossing the channel from France to the UK after deputy prime minister Dominic Raab and The Times stated that is the case. Albania’s foreign minister, Olta Xhaçka, and its ambassador to the UK, Qirjako Qirko, labelled the claims as “fake news”. Xhaçka angrily tweeted the claims splashed on the front page of The Times, saying: “Same old fake news, this time in the front page of a respected paper as The Times!”

Uzbekistan and Kazakhstan have held military drills near the former’s border with Afghanistan, imitating a response to an incursion, the Uzbek defence ministry said on Wednesday. Central Asian nations bordering Afghanistan, together with Russia, have held a series of military exercises close to its borders since the Taliban took over Kabul – while most also made moves to establish working ties with the new Afghan government.

A high-level EU delegation has held talks in the Tajik capital with foreign ministers from Central Asia to discuss issues such as regional cooperation, human rights, and the situation in neighbouring Afghanistan. After the 17th EU-Central Asia ministerial meeting was held behind closed doors in Dushanbe on Monday, EU Foreign Policy Chief Josep Borrell said recent developments in Afghanistan, where the Taliban took control over the country in August, require new approaches to the issue of security in Central Asia.

Two former Kyrgyz prime ministers, who were charged with alleged corruption during the development of the Kumtor gold-mine project, have been transferred to house arrest from pretrial custody in a detention center. A court in Bishkek ruled on November 20 to release Joomart Otorbaev and Temir Sariev and transfer them to house arrest after they signed papers saying they would not leave the country.

Tajiks head abroad as inflation and rising prices take their toll
The World Bank’s Doing Business report is no more. At least one country in Eastern Europe will miss it dearly
Comment