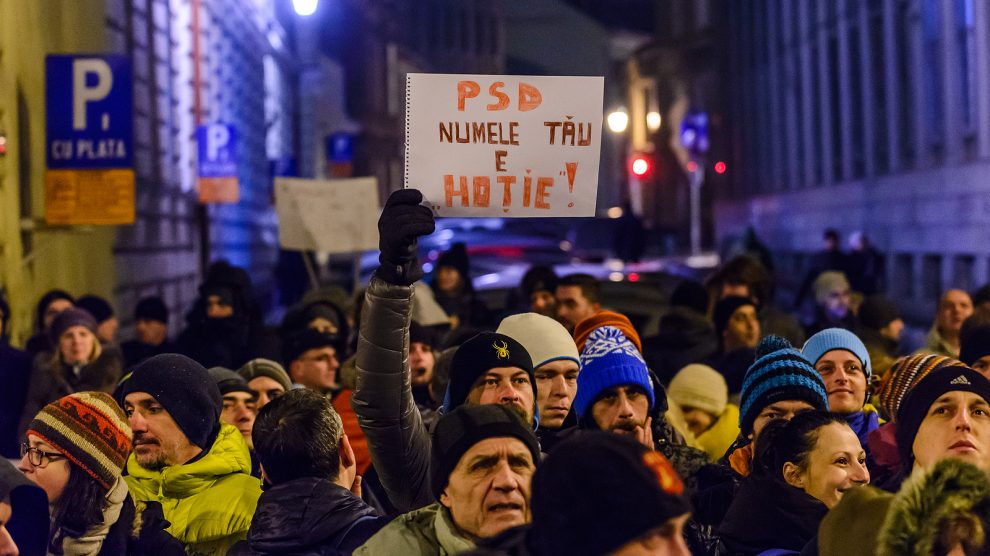 President Klaus Iohannis once vowed to consign Romania’s Social Democrats to history. On November 22 he gave them his blessing to lead the country once more.

In January 2017, there were few people more detested in Romania than the country’s then prime minister, Sorin Grindeanu.

After less than a month in the job, Grindeanu provoked outrage by passing emergency legislation that offered an amnesty to the vast majority of the country’s politicians and officials facing corruption charges.

The legislation sparked the largest protests in Romania’s recent history, with as many as half a million people taking to the streets of the capital Bucharest and other cities around the country over the course of the following week.

Amid the public anger, Grindeanu backed down. Six months later his own party, the Social Democrats (PSD), withdrew support for his cabinet and he was dismissed in a vote of no confidence.

One of the many Romanians who filled Bucharest’s Piața Victoriei on those cold January evenings in 2017 to protest against Grindeanu’s amnesty legislation was the country’s president, Klaus Iohannis.

Wearing a bright red jacket, Iohannis – welcomed by protesters as a conquering hero – promised to do all he could to condemn the PSD, which had become synonymous with corruption, to history.

Nevertheless, when Grindeanu was dismissed as PM, he chose another member of the PSD, Mihai Tudose, to succeed him. When Tudose was in turn forced to step down, he appointed Viorica Dăncilă, also of the PSD, in his place.

“I’ve decided to give the PSD one more chance,” he said when making Dăncilă Romania’s first female prime minister.

It was only in October 2019 that Iohannis, about to be returned to office for a second term (defeating Dăncilă by a landslide in a presidential election), looked to a member of his own Liberal party (PNL) to form a government: its leader Ludovic Orban.

By then, the PSD was in disarray, having lost that year’s European elections as well as its powerful leader, Liviu Dragnea, sentenced to three years in prison on corruption charges (charges that would have been dropped had Grindeanu’s amnesty ever become law).

Local elections in September 2020 appeared to confirm the PSD’s demise. It lost control of the capital to an independent candidate backed by the PNL, and won fewer locals councils than the PNL for the first time in Romania’s post-1989 history.

Just a couple of months later however, in December 2020, the PSD won the most votes in parliamentary elections, although well short of a majority. The PNL – primarily as a result of its poor handling of the Covid-19 pandemic – performed far worse than expected, as did the upstart Save Romania Union (USR), formed in 2016 with the sole intention of stamping out corruption.

Nevertheless, together with the Union of Hungarians in Romania (UDMR), the PNL and USR were able to form a government, led not by the largely discredited Orban (forced by Iohannis to resign) but by a former finance minister, Florin Cîțu.

Reform in every area of Romanian public life was promised, with transparency at the centre of government. This time, once and for all, the PSD would indeed be consigned to the history books.

Almost immediately however, an internal rift appeared in the PNL: Cîțu, despite being PM, was unhappy at not also leading his party. A long, destructive, and bitter campaign ensued as Cîțu, backed by Iohannis, sought to unseat Orban. The USR was caught in the crossfire: two health ministers were sacked as Cîțu sought to impose his authority, and at the end of August the justice minister, Stelian Ion, was also fired.

For the USR, Ion’s sacking was the final straw. It pulled its remaining ministers out of the coalition, which subsequently collapsed. Its leader, Dacian Cioloș, made it clear that he would be happy to continue governing with the PNL, but not with Cîțu as prime minister. Cîțu – and Iohannis – refused to budge.

In the end, Cîțu got his wish, defeating Orban for leadership of the PNL at its annual congress at the end of September.

But with his government in tatters, it was a pyrrhic victory. Now, two months later, the PSD – and, of all people, Grindeanu – is back, while Cîțu has been left on the sidelines. Grindeanu meanwhile is set to be sworn in as both deputy PM and transport minister this week as part of a new government made up of the PNL, the PSD and the UDMR.

“Naming Grindeanu as deputy PM is evidence that Iohannis is suffering from amnesia,” wrote Cristian Preda, a professor of political science at the University of Bucharest and a former MEP, on Facebook. “He’s clearly forgotten who issued that emergency legislation. I think it might be time to get back on the streets to defend the rule of law.”

The new government will be led by the PNL’s Nicolae Ciucă, defence minister under Cîțu and a career soldier, but the party is likely to be seen as the junior partner in the coalition.

It has been left without the all-important finance ministry, and only its continued control of the justice ministry offers it a fig leaf of respect.

This, however, might well be intentional, says Claudia Postelnicescu, a Romanian lawyer and political consultant.

“Romanian politics is often improvisation, and a pragmatism that identifies with opportunism. From this perspective, the new government is just another instance of opportunism, cynicism, and predictable short-sighted vision,” Postelnicescu tells Emerging Europe.

Method in the madness

Nonetheless, she believes that there may be some method to the PNL’s perceived madness of bringing an erstwhile foe into the government, as it already has an eye on the next, crucial, electoral cycle (2024 will see local, European, parliamentary, and presidential elections in Romania).

“Handing the most important portfolios to the PSD, rendering the PNL less important, places the responsibility for any failure to attract money from the EU’s Recovery Fund, as well as possible fraud and corruption, in the PSD’s courtyard,” she says.

“By going into coalition with the PSD, the PNL can maintain the idea that they are the good guys, the responsible party, who kept the country on the straight and narrow during troubled times, fighting the greed and corruption of the PSD. That will be the narrative in 2024.”

Postelnicescu adds that the main objective for the PNL was always to keep the justice ministry, as it wants to change the constitution, making parliament, and the government, more powerful: “If it succeeds, then it won’t matter who wins the presidential election: all power will be with the government.”

Given that Iohannis aims to have a political career after his second term ends, a weakened presidency suits him.

If that is indeed the plan – and many will argue that neither the PNL nor Iohannis is clever enough for such Machiavellian tactics – not everyone in the PNL is happy to go along with it: 17 of its MPs – allies of Orban – resigned from the party on November 22.

EU enlargement is not just about democratic values and the rule of law. There’s the economy to think about too
How is CEE responding to the EU’s new Common Agricultural Policy?
Comment