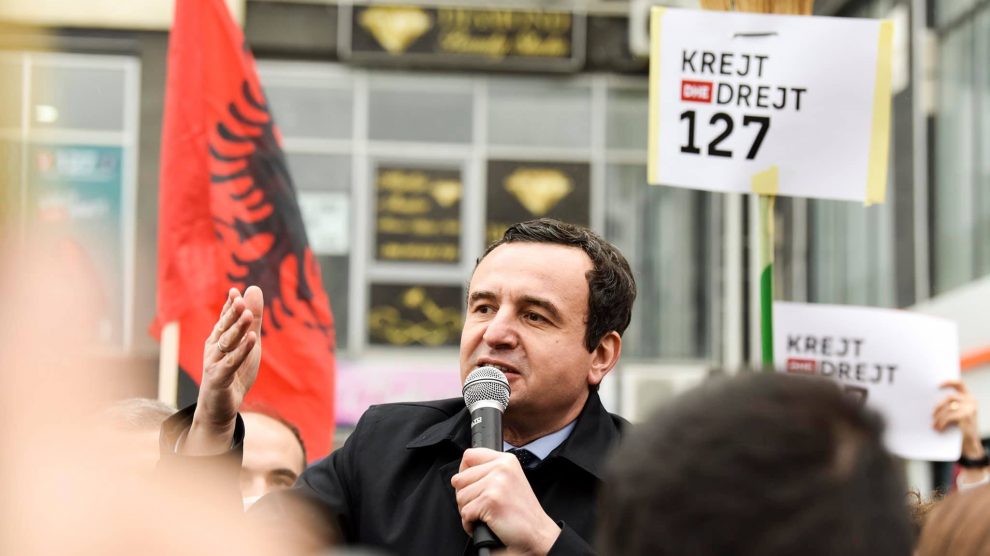 On Sunday, February 14, Kosovo will hold a snap parliamentary election, with the Vetëvendosje party of former prime minister Albin Kurti likely to emerge as the largest party. The election takes place less than 18 months after Kosovars last voted for a new parliament. We explain why they are being called the polls again.

It has been a turbulent year for Kosovo, and not just because of the Covid-19 pandemic.

In parliamentary elections held in the autumn of 2019 elections, the nationalist Vetëvendosje party (the name means ‘self-determination’) just edged out the Democratic League of Kosovo (LDK), leading to months of protracted coalition talks. The two parties eventually agreed to form a government in February 2020, with Albin Kurti (pictured above) as prime minister.

His government would be short lived.

Following accusations of mishandling the early days of the coronavirus pandemic, Kurti’s government was dismissed via a vote of no confidence in April, a vote initiated by its erstwhile coalition partner, the LDK.

In May, the country’s Constitutional Court confirmed that LDK could form a new government without the need for a new election. Avdullah Hoti became PM.

Mr Hoti’s government did not see out the year. In December, the Constitutional Court ruled that the parliamentary vote which saw Mr Hoti installed as prime minister was invalid as one of the MPs who made the new government’s majority possible, Etem Arifi, had earlier been convicted for fraud.

This in effect meant that Hoti’s government had not in fact received the support of a majority in the country’s parliament, triggering the snap election.

Vetëvendosje’s victory is all but assured

If opinion polls are to be believed, Vetëvendosje will take between 40 and 50 per cent of the vote, which could potentially see the party being able to form a government without a coalition partner. This represents a massive surge in popularity for a party which won 26.2 per cent in 2019’s election.

The Democratic League of Kosovo is projected to win 15-20 per cent of the vote, while the last of Kosovo’s big three — the Democratic Party of Kosovo (PDK) — is polling at between 16 and 22 per cent.

With or without a coalition partner, it is widely expected that Albin Kurti will return to the post of prime minister.

Most analysts believe that tough talk on corruption is behind the recent surge in Vetëvendosje’s popularity. At campaign rallies, Kurti has taken a hard-line approach to the country’s endemic corruption (according to Transparency International’s 2020 Corruption Perception Index report, Kosovo is ranked 103rd out of 180 countries globally) criticising what he calls the “old guard” as “oligarchs and cartel leaders”.

“The corruption has been huge, but it is very concentrated at the top, we believe we can beat it,” Kurti said at a recent campaign event. He also pointed out that the lack of rule of law in the country is scaring potential foreign investors away, negatively impacting the country’s job market.

According to the Kosovo Agency of Statistics data for July 2020, youth unemployment in the country has reached 54.1 per cent.

Vjosa Osmani likely to be President

One of the first tasks of the new parliament will be to elect a president: in Kosovo, presidents are chosen by MPs, not by a direct vote.

It is expected that the Vetëvendosje and LDK-dominated parliament will confirm Mr Kurti’s informal running partner, Vjosa Osmani, once of the LDK, as president.

Osmani has been serving as Kosovo’s acting president since Hashim Thaci resigned in November of last year after he was indicted on war crimes charges by a court in The Hague.

Like Kurti, Osmani has highlighted corruption and state capture as the main problems facing Kosovo.

“It is not that we lack institutions to fight corruption, it is political will that is missing. Once high-level politicians are corrupt, it seeps down through the system,” she says.

An uncertain road ahead

Meanwhile, Avdullah Hoti, who continues as caretaker PM, has taken a different approach to the campaign.

He has said that if elected, he will agree a deal with neighbouring Serbia that includes mutual recognition by the end of the year.

Kosovo unilaterally declared independence from Serbia in February 2008, but Serbia, as well as its allies Russia and China and many other countries, refuse to recognise the young country.

“This year we will finish the international agreements, end the dialogue process with Serbia, completely normalise relationships with our neighbours, ending in mutual recognition,” he told the daily newspaper Kosovan Koha Ditore.

At present, mutual recognition looks unlikely, despite a deal agreed at the White House last year (hailed as ground-breaking by former US President Donald Trump but underwhelming by just about everyone else).

Former Prime Minister Ramush Haradinaj meanwhile, the leader of the Alliance for the Future of Kosovo (AKK) who also has presidential hopes, has said that he will call a referendum on the unification of Kosovo with Albania if there is no progress on European integration by 2025.