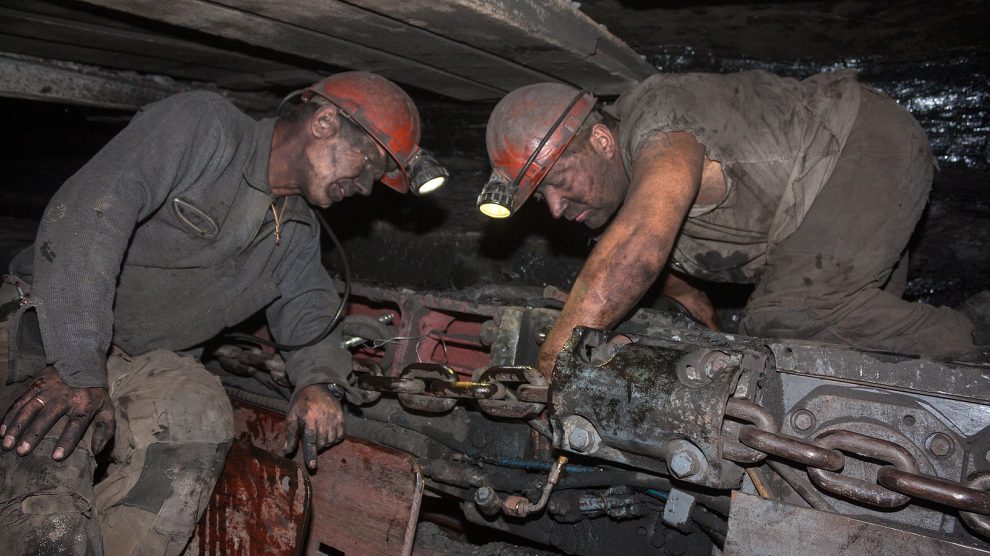 Romania’s government has given in – at least for now – to the demands of the country’s miners, who are again threatening civil unrest, this time urged on by populist politicians. Why do miners strike so much fear into Romanian society?

Romania’s prime minister, Florin Cîțu, was on February 22 forced to reassure the country that he would not allow a new miners’ revolt on his watch.

His comments came as hundreds of miners in the Jiu Valley, in Hunedoara county in the centre of Romania, protested against unpaid wages. As many 60 are believed to have barricaded themselves inside one of the valley’s mines, threatening to begin a hunger strike.

Diana Șoșoacă, a populist senator who until recently was a member of the far-right Alliance for Romanian Unity (AUR), has rallied to their cause.

“They want to close everything,” she told the miners. “Do not give up.”

Claudiu Târziu, a leader of AUR, and one of its MPs, Anamaria Gavrilă, who represents Hunedoara county in the Bucharest parliament, have also offered vocal support.

Later on February 22, the government appeared to capitulate, at least for now. Labour Minister Raluca Turcan met miners’ representatives and promised that outstanding wages would be paid by the end of the week, and that the loss-making state-owned company which operates the Jiu Valley mines, which has been in insolvency since 2019, would receive a new subsidy to cover salaries for the coming three months.

The capitulation – albeit temporary – does not come as a surprise, for angry miners have long made Romanian governments nervous. Even the country’s long-term dictator, Nicolae Ceaușescu, was not immune.

In 1977, miners in the Jiu Valley came out on strike to protest against low wages, obligatory (and unpaid) overtime, and unsafe working conditions. It was the largest strike in the history of communist Romania to that point, and so shaken was the regime in Bucharest that it sent two politburo members to Lupeni, the centre of the strike, to negotiate.

The pair (Ilie Verdeț – himself a former miner – and Gheorghe Pană) were held hostage until Ceaușescu himself was persuaded to interrupt his summer holiday to travel to Lupeni to meet the miners.

He conceded to their demands, but quickly reneged on his promises. The miners’ leaders were later arrested and imprisoned, while thousands were relocated to other coal fields around the country.

In 1990, just a few months after Ceaușescu had been toppled and killed, the Jiu Valley miners played a very different role, when the country’s new president, Ion Iliescu, once a high-ranking member of Ceaușescu’s regime, brought thousands of miners to Bucharest to put down a peaceful demonstration against his government.

Over two days in June, the miners wielded considerable force to disperse peaceful protesters, killing at least seven (the actual number is said to be higher) and injuring thousands as the police stood by (or even helped the miners identify the ringleaders of the anti-Iliescu protests).

Before they left the capital, Iliescu thanked them for carrying out their “civic duty”.

Just over a year later, in September 1991, they were back, storming the government building in the north of the capital and forcing the resignation of Petre Roman, Romania’s prime minister, who had fallen out with Iliescu.

They tried again to topple the government, by then centre-right, in 1999, setting off for Bucharest only to be turned back after scuffles with the security forces.

Since then, both the political and economic clout of Romania’s miners has waned.

Coal is no longer as crucial to the generation of electricity as it once was, subsidies for the loss-making sector have been cut and production has plummeted from 22 million tonnes in 1992 to just 600,000 tonnes in 2019.

This has had a devastating effect on the economy of the Jiu Valley. According to the European Union, employment rates are significantly lower than the Hunedoara county average (39.4 per cent and 53 per cent, respectively), although the valley has comparatively low unemployment rates, ranging between 1.4 per cent and 2.5 per cent across its communities.

Indeed, over the past decade, the number of unemployed people within the Jiu Valley and Hunedoara County has declined. This trend may imply a partial redress of some of the socio-economic consequences of the contraction of the mining industry but also suggests significant levels of economic inactivity and emigration within the former mining communities. A degree of economic restructuring and diversification towards manufacturing and service activities is evident in the valley, although entrepreneurship opportunities and business start-ups are still relatively limited.

While Romania remains one of the just seven EU member states not to have set a date for a full exit lignite and hard coal, the future of the Jiu Valley is bleak. Construction of a new coal-fired power station, proposed in 2012 and set to be built with Chinese loans, appears to have been cancelled: there is no mention of it in the country’s latest National Energy Plan.

However, as bleak as the future of the Jiu Valley may be, unlike other countries where the mining sector has been decimated, there is very little public sympathy in Romania for the miners’ plight.

Memories of the violence and devastation that they brought about in 1990 and 1991 are still far too fresh in the memory.

Besides, other legacy industries in the country are struggling too, but they are not always the beneficiaries of generous government handouts.

The populist politicians who have suddenly rallied to the miners’ side, such as Șoșoacă and Târziu, have until now chosen their causes carefully. Much of AUR’s success in December’s parliamentary election, when it took almost 10 per cent of the vote less than a year after being founded, could be put down to its opposition to Covid-19 lockdown restrictions and containment measures (Șoșoacă herself has made great show of not wearing a face mask in parliament).

It will find few who back its support for the miners, however.

The need for Romania’s government to back down so quickly – even as a stop-gap solution – is also open to question. While threats of a new “miners’ revolt” are never pleasant, on the previous occasions that the miners did make it to Bucharest they had significant logistical support from the state. This would not be the case again. Romania’s internal security forces would have little trouble turning them back.

The day after Georgia gets a new PM, police arrest opposition leader
Why is Ukraine still not in NATO?: Elsewhere in emerging Europe
Comment