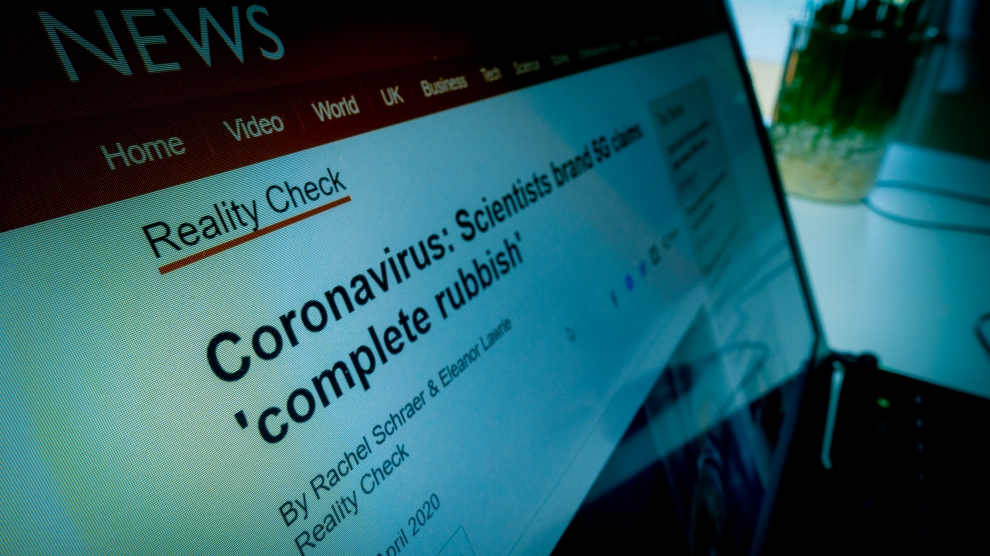 Broadcast television may never be the same again, according to Samuel Burke, Emmy award-winning business and tech journalist at CNN. “This is an industry that was already being affected by companies like Netflix and Warner Media. There are fewer and fewer people who are willing to pay for cable subscriptions. And due to Covid there are going to be fewer journalists on television.”

Burke was speaking at an event organised by Emerging Europe in partnership with Sigma Software that brought together experts from across the world to share their thoughts about the current and future state of the global media industry. It was part of a series of tech business-related webinars by Sigma Software Accelerated Change, launched as a response to Covid-19 and aiming to explore the new reality, inspire businesses to move forward, and present expert views on how to surf the digital wave.

Those present, who alongside Burke included Anamaria Dutceac Segesten, a political scientist, senior lecturer, and a co-founder of European Studies at Lund University, William Mercer, venture director at Zag, the venture arm of the global creative agency BBH and Emerging Europe’s founder Andrew Wrobel, agreed that the Covid-19 pandemic has had an impact on almost aspect of our lives, and that media is no exception.

However, it’s not all bad news.

“Outlets such as The New York Times and The Wall Street Journal are reaching new heights in terms of revenue with their new online subscription models,” adds Burke. “But there is a difference. Print journalism does give you incredible quality, and TV has a more unifying effect. Ted Turner’s vision for CNN was that we would all be seeing the same thing. That type of journalism may be lost. If we don’t have these unifying channels that bring us all together, there will be even more misinformation and disinformation around.”

Burke pointed to Russia Today as the “gold standard” of such negative trends.

“They meld between state, fake news, disinformation, and appearing like a mainstream CNN competitor,” Burke says.

According to Anamaria Dutceac Segesten, nobody should use the term “fake news”.

“It is a politicised term that has been made popular by and for a certain politician. I’m thinking obviously about Donald Trump who uses this term to label any kind of channel that is critical of him,” she says. Dutceac Segesten instead suggests calling the phenomenon “false news”.

Dutceac Segesten divides “false news” into two categories. One is dangerous but “random”. That is when people, even those whose intentions are strictly positive, share information that is not grounded in any scientific evidence. The other strand purposefully aims to provoke a lack of trust and to endanger trust in social institutions.

“When we think about social media, it is this kind of unchecked spread of information that is de-territorialised and decontextualised. You can repurpose information, edit a video, an audio clip, or rewrite a certain text paragraph. We’ve seen that we are being manipulated strategically by many politicians. We can see that even in the context of Belarus. This is an uncontrolled spread of information, out of context, out of time, there is no particular marker who said it originally or where it was said,” adds Dutceac Segesten.

To be aware of what information you consume, she recommends always keeping a “critical thinking button” turned on. “I would also advise looking at multiple sources. Check what other media are saying in this context and then try to make your conclusions,” says Andrew Wrobel.

Although social media has become the primary source (75 per cent) of information for young people, only 15 per cent of them automatically trust it.

“Maybe we have become apprehensive of all media by default. There’s a greater level of responsibility on us as individuals to vet the news ourselves, whereas historically we could have trusted our institutions. So, I think there is a general theme of erosion of trust in institutions,” says Will Mercer. In contrast, Sam Burke believes that there’s a line between sceptical and apprehensive that people haven’t crossed yet.

However, there have been some unnerving moments when it comes to such lofty matters as the credibility of institutions.

“If we look at countries like Poland and Hungary, we can see the rise of authoritarian leadership. There is demand from the government to take over the media there,” says Wrobel. “The whole media landscape in Belarus is owned by the government. But you see Telegram channels like NEXTA growing heavily. This is not a traditional media outlet.”

NEXTA is a parallel channel that cannot be easily controlled by the government in Belarus. “This is a highly encrypted platform. You can set a message to ‘self-destruct’ so that the police cannot accuse you officially of working for an unseen enemy,” Segesten Dutceac explains.

There is an emerging pattern of such micro, community-based news across the world, in Africa, Brazil, and India, where WhatsApp has become a primary news channel. WeChat and Viber are also huge in Asia.

Burke believes that it’s sad that we’re in a situation where people want Facebook and Twitter to become the arbiter of truth. But according to Segesten Dutceac, the social media platforms themselves don’t want to have that responsibility. “They don’t want to be the ones accused of letting through dangerous pieces of information that can cause death or harm to people.”

Moreover, Facebook and Twitter demand to be regulated by external and objective forces. “They wish to remain platforms, not social media networks. They want to be called ‘platforms’, because as a platform you’re like a plate. If someone else puts things on a plate, it’s not you who put them there,” she says.

As for how such platforms should be regulated, there was agreement that while regulation slows down the pace of innovation and prevents new entrants into the marketplace, it can provide a safer environment for citizens.

“Do you really want governments regulating and being the arbiters of truth? It’s a slippery slope,” says Burke.

“It’s a very tough dilemma,” adds Segesten Dutceac. “In the EU there is a strong desire to regulate ‘tech giants’ at the risk of innovation but to the benefit of freedom of expression.”

The question is who should regulate what? Do we trust all governments when it comes to the future of media outlets?

“The political administration has succeeded in gaining power through subverting media. That created a general lack of trust in the system. I feel like the pervasiveness of false information in the media has spilled out to generally undermine people’s trust in the point of contact with society as a whole,” Mercer says.

Samuel Burke has personally experienced the government’s power over the media, pointing to a case when the Saudis used his news coverage to substantiate their position by using the power of bot farms.

“When I was reporting on the assassination of Jamal Khashoggi, a journalist from Saudi Arabia, there was one little thing that I reported about his Apple watch. The Saudis took this one line and put out a video of it. And all of a sudden thousands of people began to retweet this line. So the Saudis were saying, “this proves that we had nothing to do with Khashoggi’s death”. I started looking at the bots and they were all Arab men. They weren’t real people but they were amplifying what I said and twisting it on a global level,” Burke says.

Facebook and Twitter have invested a significant amount of money into the automated detection of fake accounts. European Facebook representatives say they have a success rate of 99 per cent. “If we did not have the filter that Facebook introduced, we would be inundated with fake accounts,” says Segesten Dutceac.

When it comes to the future of media, Samuel Burke points to podcasting as a medium to watch.

“You see a lot of major companies like CNN and the NYT investing in podcasting. It creates an opportunity for quality journalism. Great storytelling never changes, it’s just the medium that changes and podcasting is great,” he says.

He also believes that streaming platforms such as Netflix, AppleTV, and Amazon Prime will inevitably have their own TV news channels. “We’re going to see some major shifts in media. News is a very profitable industry.”

Dutceac Segesten is convinced that the future lies in a combination of computer science and journalism. “Data visualisation and data journalism is there. There will be professionals that will be able to harness information, filter it, and process it in multiple languages.”

“I would also look at video and user experience and the way we consume media,” adds Wrobel.

The full series of Sigma Software Accelerated Change seminars can be viewed here.