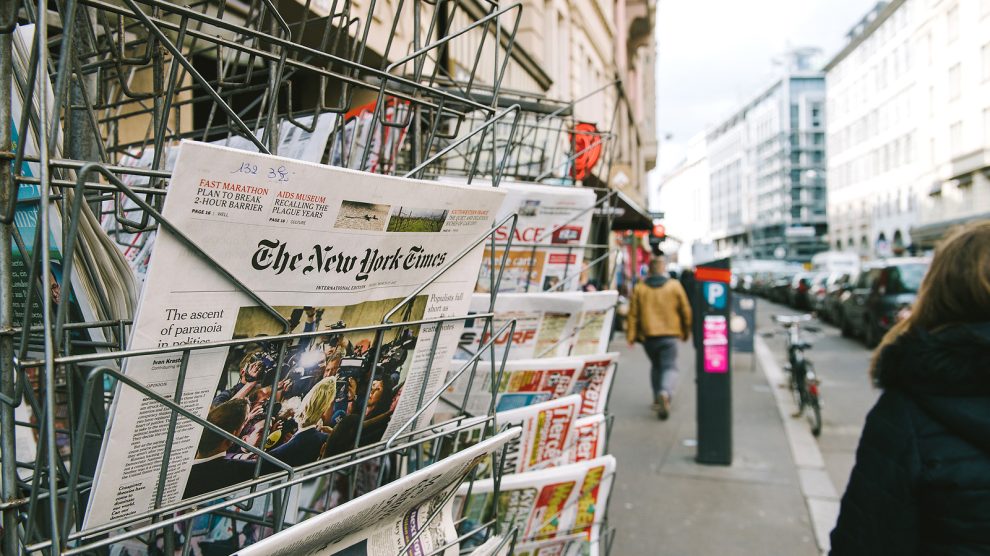 We may not yet know what innovations the media industry will come up with in the future, but we can be certain that in order to be successful, news organisations must embrace them.

The Kyiv Independent, a platform offering news about Ukraine in English, was founded just three months before Russia launched its full-scale invasion of Ukraine in February 2022.

It had been set up by journalists previously employed by another English-language publication, the Kyiv Post, which had for more than two decades been the world’s window on Ukraine.

With advertising budgets slashed as Ukrainian firms scrambled to adjust to the new realities caused by the invasion, the Kyiv Independent quickly pivoted to crowdfunding in order to secure its immediate future. By the end of March, it had raised more than 1.5 million US dollars through a GoFundMe campaign, and has since then become one of the key sources of news and information about Ukraine for people across the world.

Its social media accounts and daily newsletter have millions of followers and subscribers. Last month it launched a podcast, Power Lines. Its journalists are regular guests on the world’s major news channels. It has become ubiquitous, and to describe its almost overnight success as phenomenal is an understatement.

The value of accurate reporting

While there is little doubt that the Kyiv Independent would not have raised the money it did had Russia not invaded Ukraine is to miss a key point: that there are millions of consumers of news who still value on the ground, accurate, firsthand reporting enough to financially support it.

For the past two decades, it has not always been clear that this was the case. While some publications have successfully transitioned from advertising to subscription-based models (such as the New York Times and the Financial Times), others, including well-known brands such as the UK’s best-read newspaper, The Sun, have failed.

They – as well as thousands of newer media brands – have instead pursued a different strategy, filling their websites with what has become known as click-bait, articles of questionable provenance and journalistic merit headlined with teasing words designed to attract the maximum numbers of viewers in the hope that a few might click on accompanying ads.

For some it has worked, but it is a strategy that only pays off if the number of clicks is enormous, and is not usually an option for smaller operations (and those that place an emphasis on quality reporting), such as the Kyiv Independent, or another successful outlet active across the emerging Europe region, Eurasianet, which has an institutional funding model.

The click-bait model also fails to consider the fact that stories are increasingly being shared in so many ways, be it through social media, podcasts, or instant messaging services, such as Whatsapp, Tik Tok, or Telegram. It looks increasingly unsustainable.

The non-click bait headline is that we simply don’t need to read a newspaper, a news website, or even watch or listen to broadcast news to follow world events anymore. Increasingly, an entire generation is choosing not to.

According to a report from the Reuters Institute at the University of Oxford, more young people (aged 18-24) use social media as their main source of news (39 per cent) than go direct to a news website or app (34 per cent).

The report says that these young people are drawn to the informal, entertaining style of visual media (and particularly online video) platforms – describing it as more personalised and diverse than TV, as a resource for rapidly changing events such as the Russia–Ukraine conflict, and as a venue for niche interests, from pop culture to travel to health and well-being.

Nevertheless, the report also adds that under 35s still largely say they prefer to mostly read (58 per cent) rather than mostly watch (15 per cent) news.

“There is not a one-size-fits-all approach or medium through which newsrooms can attract younger audiences,” the report concludes. Media brands need to take note.

A major event, the Global Media Congress (GMC), set to take place in Abu Dhabi from November 15-17, will look at these issues, alongside many others, bringing together influential leaders in the media industry to exchange innovative ideas and solutions defining the future of media.

“The GMC is the first of its kind in the Middle East, and will gather participants from around the world and across a range of industries to discuss the theme: ‘Shaping the Future of the Media Industry’. The conference will focus on digital transformation and how events around the world are fundamentally changing the way stories are shared and media is consumed,” says Mohammed Jalal Al Rayssi, director general of the Emirates News Agency (WAM), which is organising the conference. Al Rayssi has long advocated tolerance, and the role of the media in building tolerant societies will be a key theme at the event.

The event includes several media labs, a series of invitation-only roundtables taking place on the sidelines.

“The labs are included as part of the GMC with a view to generating long-lasting ideas to shape the future of the media industry,” adds Al Rayssi. “The sessions will see a no-holds barred and honest discussion on the various challenges confronting the media sector, with a focus on how to take the industry forward and ensure its bright future. We have taken care to make sure that the participants in the labs represent as diverse a range of media expertise as possible.”

Anamaria Dutceac Segesten is a professor in European studies and strategic communication at the University of Lund in Sweden who has lectured and written extensively on the impact of social media in the world of news, particularly its impact on political extremism.

“Where traditional media stands for information, social media is the domain of opinion and commentary,” she says.

Nevertheless, Dutceac Segesten believes that new technology can enhance traditional newsrooms, underpinning their role as purveyors of professional journalism, complete with high standards of accuracy, truthfulness, impartiality and independence from any particular interests.

“Technology will be deployed not only to verify the accuracy of information but also to improve the process of newsmaking, for example with the help of artificial intelligence (AI),” she says.

“Media innovation will not just be just about new distribution channels or about checking for information manipulation. It will also be about recruiting the power of AI in newsrooms. This will be particularly beneficial for media systems where journalists are at risk. AI can really make a difference for newsrooms where resources are scarce.”

Regardless of the innovations the media industry will come up with in the future (and who knows what Elon Musk, who finally purchased Twitter last week, has in store for the platform; early reports suggest that verified accounts will need to pay a monthly fee to keep their cherished blue ticks), what is important is that media organisations – and, for that matter, companies, NGOs, governments and anyone wanting to get a message out – embrace them, says Matthias Luefkens, a social media architect who has long advocated what he calls “filling spaces”.

“It’s extremely important to at the very least register your brand name on every platform,” he says. “Make sure you have ownership of that channel, and then you can decide what you are going to do with it and how you are going make use of the innovations the platforms come up with, such as Twitter’s community feature.”

Luefkens adds that equally important is exploring newer channels. He points to Mastodon, a decentralised, open-source social network that is hoping to gain traction following Musk’s takeover of Twitter, as well as Tik Tok and Telegram, which he says is where “news about the war in Ukraine is breaking”.

“Why aren’t more organisations on Telegram?,” he asks rhetorically.

Nimble, digital native media firms ready to pivot at a moment’s notice, such as the Kyiv Independent, as well as more savvy traditional media, get this. Other legacy organisations finding the digital transformation more difficult would do well to follow their lead.

Kazakhstan’s pivot towards the West is grabbing the attention of investors
Poland signs nuclear deals, but concerns over slow pace of coal exit remain
Comment