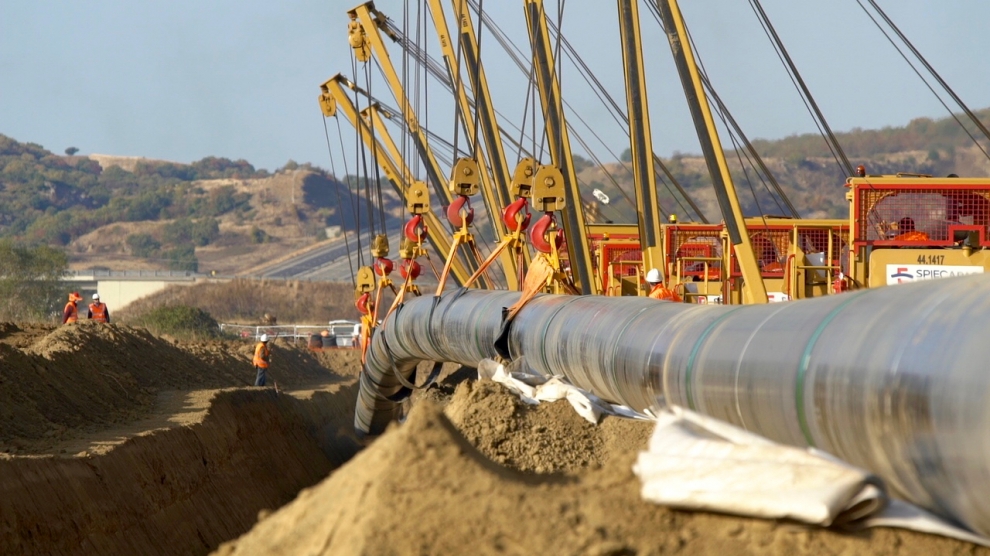 Interestingly enough, the gas sector once played an important role in Albania and the country was a relatively large gas producer. In 1982, gas production amounted to one billion cubic metres but has now dropped to mere 0.01 billion cubic metres. It is worth noting that Albania and Kosovo are the only countries in the Western Balkan region which are not connected to international natural gas networks.

The existing oil network, which is 498 km long, is not in a good shape, either. It connects all the existing sources of oil, with the exception of the pipeline that connects the natural oil wells in Delvina with the Ballsh pipeline (the latest one being renovated), but it is no longer functional. Most of it is corroded and defective which makes its use unviable. Consequently, a new oil transmission and supplying system is needed.

Fortunately, there are positive changes on the horizon. One of them is TAP, which now is under construction and will have a pipeline connection between Albania and Greece. The project’s value is estimated at €4.5 billion. Its management says that the project will not be affected by international energy geopolitics. One of the main benefits, even for Albania, of the TAP strategic project will be the gasification of the country; a process requiring not only the capacities of the TAP Project but also requiring the purchase of natural gas from the Shah Deniz II field in Azerbaijan.

The gas master plan for Albania is derived from TAP and represents the best gas distribution strategy, bringing profits for consumers for whom a natural gas supply is economically possible. This particular research describes a gas supply system that will be extended for a very considerable period (2020-2040). It will take internal oil production in Albania into consideration, and anticipates that the entire demand for use of thermic energy in families, services and industries should be covered by the natural oil. Use in Albania will be approximately 2,167 million cubic metres in 2040 (including agricultural and transport).

The potential is for TAP’s natural gas to be used in the production of electrical energy and is estimated to be at 770 million cubic metres in 2040, with natural gas use by refineries estimated at 90 cubic megametres in 2040. Part of the plan covers the production of electric energy through the gas, primarily from existing power plants, such as the Vlora Power Plant 94 MW which will be transformed and modernised, converting it into a gas functioning plant. There are also plans for two further electric energy production plants using natural gas combustion predicted to supply a total of 300 MW.

There is also an opportunity for natural gas storage, which has a crucial impact on the security and stability of natural gas supplies ability to meet customers’ requests. One of the potential options is Dumrea (in West Central Albania) which with its salt domes formation, is the largest accumulator creating underground deposits in Dumrea region and covers  a surface of approximately 250 sq. kms.

With this development in mind, the Albanian Government established a crucial new company, called “Albgaz”, in December 2016, which is 100 per cent funded through state capital. Following on from this government decision the company will be run as a combined operator, combining the activities of the transmission system’s operator and the natural gas distribution system’s operator.

The Tirana and Durres regions make up the main regions of considerably size for potential gas consumption. The contribution from the residential sector should reach around 32 per cent of the total consumption and similar values are expected from the services sector, whereas the industrial sector will account for almost 37 per cent of the total consumption. For this reason, it is recommended that the Tirana-Durres region shall be considered as a common gas distribution centre. The Fier-Vlora-Ballsh region also represents a crucial triangle in industrial gas consumption, which could be used as an anchor-point for customers enabling the gasification of the nearby regions.

One key element of this master plan is the connection of Albania to other countries in the region, such as Montenegro through the IAP project (Ionian Adriatic Pipeline), Kosovo through the ALKOGAP Project and Greece and Italy through TAP. Meanwhile, there are discussions going on with Macedonia, in order to determine a potential connection point between the two countries, thus terminating the interconnections with other neighbouring countries.

Last year, Albania, Croatia, Bosnia and Hercegovina and Montenegro signed a Memorandum of Understanding (MoU) concerning the construction of an Adriatic-Ionian Pipeline (IAP) with the Azerbaijan state company, SOCAR.

The IPA Pipeline will have a length of 516 km and a capacity of five billion cubic metres of gas per year. It will be connected with the Trans Adriatic Pipeline (TAP) near Fier (Albania), and shall cross Albania, Montenegro and BiH, terminating in Spilt Croatia, where it will be connected with the current gas distribution system. From Croatia the gas will then be distributed to Hungary and other countries of Western and Central Europe.

Because of this, there is an increase in interest from large investment companies from various countries beyond Europe, which are mainly interested in being part of the IAP Project. Investments in the development of the IAP Project are predicted to be approximately 620 million Euros. It’s worth mentioning that the project’s feasibility study has come to a successful end and, currently, it is in the project preparation phase. The two countries that are participating in the project, Albania and Montenegro, should soon be able to draft a complete study package, in order to cooperate with foreign investors.

Moreover, the IAP project will make the gasification of northern Albania possible, starting in Durres, Lezha and Shkodra; all key cities for the foreign investment development in Albania.

TAP has recently signed a Memorandum of Understanding and cooperation with the projects’ developers, particularly the Croatian gas transmission operator, Plinacro, with the BH-Gas Company in BiH, and with Geoplin Plinovodi in Slovenia. A mutual working group has also been created between TAP and IAP in order to coordinate the implementation of both projects and define the technical terms, and which organises frequent work-related meetings.

The question remains: is Albania going to be a big gas energy hub? This is a tough question, to answer, but with the latest strategic renewable energy investments, and gas pipelines passing through all regions, Albania sees its winning in the future with this dual strategy.

Erlet Shaqe is Chairman of the Albanian Energy Association (AEA) in Tirana, Albania. His goal is to implement high work performance and best energy efficiency and to secure the best legislative and regulatory framework for expanding sustainable and renewable energy production. He has worked with government departments, agencies, regulators and NGOs. He has an Engineering Degree in Energy field – Renewable Energy.
Twitter: @erletshaqe