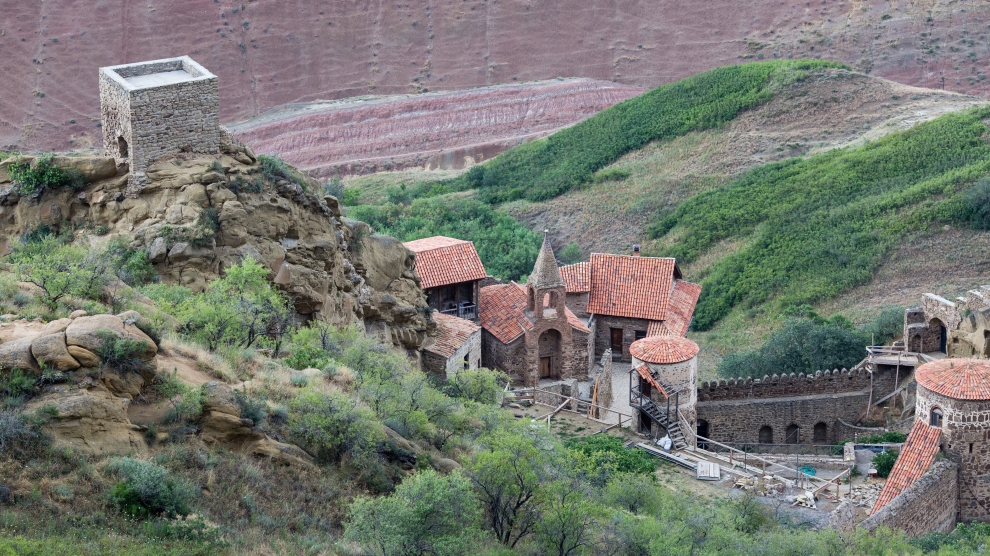 Azerbaijani Foreign Minister Jeyhun Bayramov paid his first official visit to Georgia last week. During a meeting with his Georgian counterpart David Zalkaliani, both sides stressed the importance of their countries’ existing strategic partnership and cooperation. Baku and Tbilisi enjoy solid relations built on an understanding of regional geopolitical challenges and mutual interests in energy and trade. There are, however, matters of contention.

The relationship has been relatively stable since both countries regained their independence in the early 1990s. Georgia has become a crucial transit route for delivering Azerbaijan’s west-bound oil and gas resources, while the latter supplies Georgia’s hydrocarbon demands, helping Tbilisi diversify imports of oil and gas. In light of the constructive partnership, the two South Caucasus states have in the past swept disagreements under the carpet. Lately these issues have started to surface.

Understandably, disagreements between Georgia and Azerbaijan pale compared to more urgent problems of the region such as Abkhazia and South Ossetia and the Nagorno-Karabakh conflict. Yet, if not appropriately addressed, ongoing issues between Georgia and Azerbaijan may further complicate the South Caucasus situation while creating fertile ground for countries interested in instability in the region.

For Georgia and Azerbaijan, three primary sources of tension must be addressed through diplomatic channels as a matter of urgency.

First, amidst growing hostility between Azerbaijan and Armenia in July, Georgia was groundlessly accused of allowing arms to transit from Serbia to Armenia. Although the Azerbaijani government has never officially accused Georgia of facilitating arms travel to Armenia, a media report caused distress to the countries’ relations. A few days prior to Minister Bayramov’s visit to Georgia, President Ilham Aliyev refuted these allegations and thanked Georgia for not allowing arms transfer via its territory.

Second is the ongoing and unresolved issue of Azerbaijani company NEQSOL Holding’s bid for 49 per cent of shares in telecommunications firm Caucasus Online – the largest provider of high-speed internet in Georgia. In July, due to the absence of prior notification, the national regulator Communications Commission blocked the transaction. This led to the Georgian Parliament amending the Law on Electronic Communications. NEQSOL, a significant player in the telecommunication sector of Azerbaijan, acquired Ukraine’s Vodafone in 2019 and was eager to expand its business in Georgia. The purchase of a minority share in Caucasus Online would provide the Azerbaijani company access to the most important physical asset of the Georgian company – the Caucasus Cable System. This is a fibre-optic cable that transmits internet traffic from Europe to the South Caucasus and the Caspian Basin via the Black Sea Basin.

Finally – and most relevant to Minister Bayramov’s visit – is the ongoing unrest at the David Gareji monastery complex / Keshikchidag monastery (pictured above), located at the conditional border between Georgia and Azerbaijan. For 24 years, Georgia and Azerbaijan have been unable to reach a consensus about where the border lies around the monastery. This has caused moments of turmoil, the latest of which occurred in February when Azerbaijan’s military forces restricted access to the territory.

Minister Bayramov’s visit last week brought to the fore Georgia’s firm belief that since 1996, the joint commission working on the Georgia-Azerbaijani border’s demarcation has delivered pre-agreed decisions that go against Georgian interests. As a matter of fact, this has resulted in the transfer of significant portion of Georgian land to Azerbaijan, including the territory on which the monastery complex is situated.

For Georgia, a predominantly Christian society, the monastery is an important symbol of national identity, while for predominantly Muslim Azerbaijan, the matter carries historical significance. Azerbaijan considers the sanctuary as a part of its ancient Albanian heritage and evaluates the issue solely from a border demarcation prism.

Azerbaijan and Georgia have previously agreed on two-thirds of the border demarcation. The remaining 35 per cent, including the monastery, remains disputed. Following the escalation of tensions around the monastery in April 2019, President Aliyev appointed Deputy Minister of Foreign Affairs Khalaf Khalafov as a special envoy on the matter. As a result, the joint commission working on the border’s demarcation restarted negotiations the following month.

During last week’s visit, Minister Zalkaliani presented his counterpart with cartographic material and expert conclusions, which Georgia believes will clarify the border disagreement. While these documents were not publicly released, the foreign minister said the joint commission should decide whether to implement changes to the 2006-7 border agreement, “based on the new materials and the interests of both nations.” He also expressed hope that the documents will ensure the border issue is settled through consensus. Despite media interest, he declined to elaborate further on the documents shared with his colleague. This created a sense of vagueness amongst political stakeholders and media, some of whom demanded further explanation and speculated the arrangement in question could be harmful for Georgian interests.

In many ways, Covid-19 has brought diplomacy to a standstill. As leaders grapple with a once-in-a-generation pandemic, their focus has been on ensuring citizens’ welfare rather than the pursuit of diplomatic relations. Meetings and official visits have been suspended while the virus wages on, meaning tensions and long-standing disputes stay unresolved.

Minister Bayramov’s visit was an essential first step in resuming diplomatic communication between Georgia and Azerbaijan, briefly interrupted by the pandemic. The relationship between the two countries is based on common interests and decades of partnership. Strong cooperation between Tbilisi and Baku does not merely contribute to the peace and stability in the region but strengthens Europe’s energy security as well. There are, however, lingering issues that need to be addressed to enhance the strategic partnership between the two countries.

Rauf Mammadov is resident scholar on energy policy at The Middle East Institute in Washington, D.C. He focuses on issues of energy security, global energy industry trends, as well as energy relations between the Middle East, Central Asia and South Caucasus.

Protests in Bulgaria: Another troubled EU country
Far from ‘drifting away from European integration’, Georgia is closer to the EU than ever
Comment