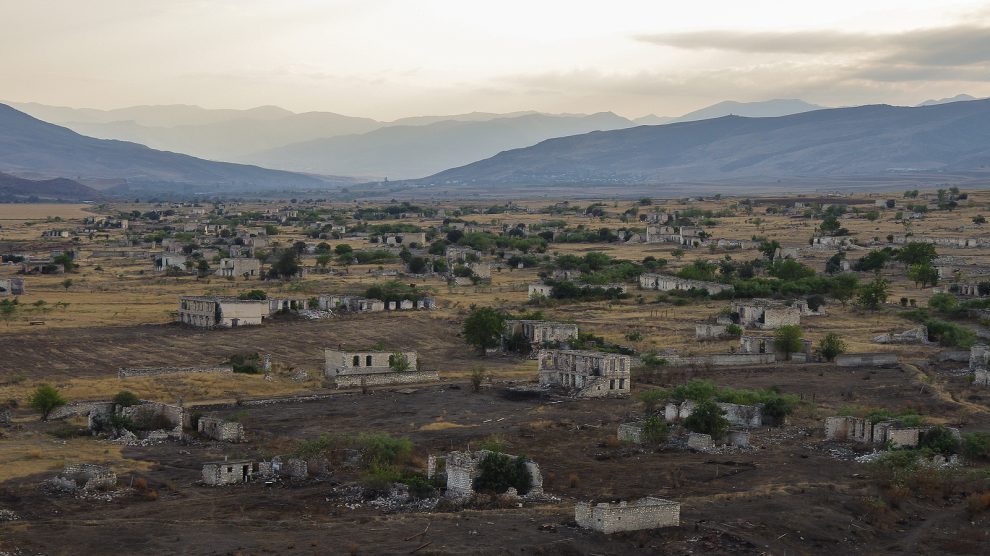 With a peace deal now in place in Nagorno-Karabakh, Azerbaijan has shifted its focus to the future.

Following the historic peace agreement between Azerbaijan, Russia and Armenia which brought long overdue stability to the Nagorno-Karabakh region, hundreds of thousands of Azerbaijanis, violently expelled by Armenian forces over 25 years ago, may finally return home.

The recent peace deal ends Armenia’s illegal occupation of the seven territories surrounding Nagorno-Karabakh, an outcome that several UN Security Council resolutions had long demanded. With the deal in place, the focus of the government in Baku has shifted to the future: rebuilding communities, restoring prosperity and preserving the region’s rich cultural heritage. It will be an immense task, and teams on the ground are already at work with two urgent priorities: removing thousands of unexploded mines, and preserving the liberated regions’ historical heritage and religious sites.

The Halo Trust, an international non-profit organisation that removes landmines from conflict zones, has said there have been more landmine accidents per capita in Karabakh than anywhere else in the world. A quarter of the victims are children. In total, according to Azerbaijan’s special de-mining agency ANAMA, some 535 civilians have died and 2,418 have been injured from mine explosions in Azerbaijan. Today, the presence of landmines in Nagorno-Karabakh and neighboring territories presents a major risk to the returning civilian population and agencies delivering humanitarian aid.

Led by Azerbaijani specialists alongside Russia’s peacekeepers, de-mining efforts are underway. Last month, ANAMA official Idriss Ismayilov said that his teams had “neutralised 169 unexploded anti-tank and anti-personnel mines so far”. Although some of these IEDs are remnants of the first Karabakh war in the 1990s and have been in the ground for decades, the majority are more recent. In fact many allege that they were planted by the retreating Armenian forces as the ceasefire agreement was being negotiated, in a final illegal act of war. Accidents have already happened, killing several, including civilians.

Nearly thirty years of Armenian presence have taken their toll. For Idriss Ismayilov: “it will take up to 10 years to completely de-mine the territory but people would be able to return to their ancestral lands in between three and five years.”

As Azerbaijan’s de-mining campaign progresses, the full scale of Armenia’s occupation on cultural sites,  in breach of UN resolutions, is only now being realised. Over decades, Azerbaijani cultural artefacts in Karabakh have been systematically vandalised, misappropriated and destroyed. Cemeteries have been demolished, sacred sites desecrated, and other cultural artefacts have been ransacked or left to crumble.

Aghdam (pictured above) is perhaps the saddest and most striking example. A once lively Azerbaijani town, it was entirely destroyed by Armenia in 1993, and left in desolation. Known as the “Hiroshima of the Caucasus”, it was recently returned to Azerbaijan under the trilateral peace agreement.

By contrast, the Azerbaijani government has repeatedly affirmed it wants to protect historical landmarks in recaptured areas.

Azerbaijan’s Acting Minister of Culture Anar Karimov made clear that the government will safeguard the nation’s cultural wealth in all its diversity. Reports of the extensive damage to sites in the formerly occupied territories have been passed on to the UNESCO. Against this backdrop, President Vladimir Putin of Russia and President Emmanuel Macron of France asked that an independent fact-finding mission, which could be conducted by the ALIPH Foundation, take place. Baku should let this happen, to demonstrate its commitment to the protection of the region’s rich and diverse heritage is high on Baku’s agenda. Adding some of the most significant sites, such as the cultural city of Shusha, the Khudafarin bridges on the old Silk Road, or the Dadivank monastery to the World Heritage List is being explored.

The Azerbaijani government has said that making Nagorno-Karabakh safe for people to return, and protecting the region’s rich cultural heritage, are two of its priorities. In pursuit of these goals, the government just announced that it would allocate over one billion euros from the 2021 national budget for the restoration and reconstruction of the liberated territories. These pragmatic investments can be the building blocks of lasting peace.

Emmanuel Dupuy is a geopolitical analyst, and the founder of think-tank IPSE (Institut Prospective et Sécurité in Europe).

More than ever, journalists in Belarus need support
Despite familiar risks, Romania has a shot at unprecedented stability
Comment