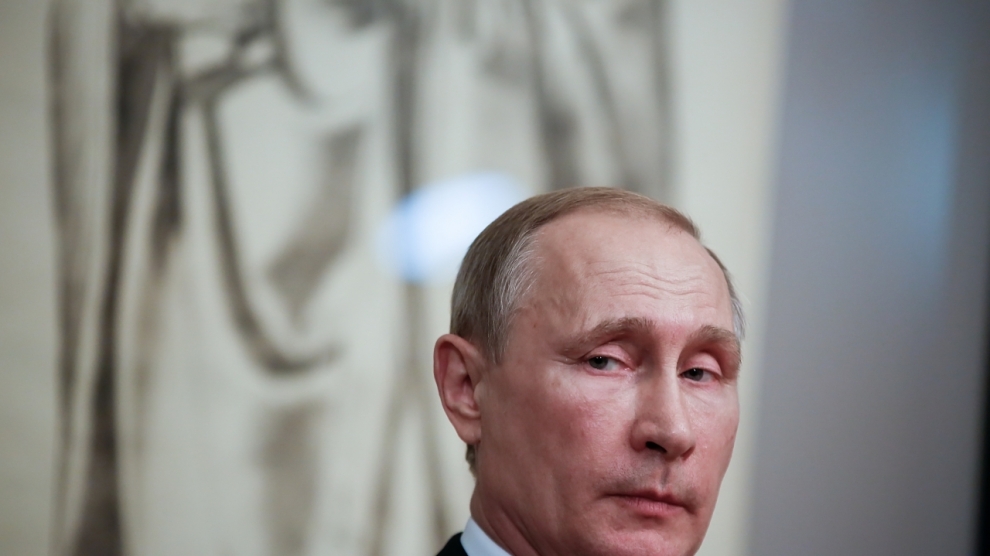 Those who claim the Cold War is back found grist for their mills on February 1, when Secretary of State Mike Pompeo announced the United States would suspend the Intermediate-Range Nuclear Forces (INF) Treaty. Signed in December 1987 by Soviet leader Mikhail Gorbachev and US President Ronald Reagan, the INF treaty was widely regarded as a major stepping stone toward bringing an end to the Cold War.

Aiming to reduce tensions in Europe, the US and Russia committed to eliminating and permanently forswearing all ground-launched ballistic and cruise missiles (both nuclear and conventional) with ranges of 500 up to 5,500 kilometers.

The U.S. claims that in early 2017, Russia deployed a ground-launched, intermediate-range 9M729 cruise missile (a variant of the Novator RK-55 Relief, a land-based version of the naval Kalibr cruise missile), representing a violation of the treaty. Although the Kremlin had long contemplated pulling out first, it still reacted angrily, rejecting the US accusation.

No matter which side’s argument has greater merit, it is clear that we are witnessing a breakdown in the mechanisms that kept the Cold War cold, namely, arms control and confidence building.

The Kremlin is so sensitive to changes in the arms control regime because although Russia has a well-funded programme for rearmament and an intensive program of large-scale drills, it remains inferior to NATO in conventional war-fighting capability. Russia could launch a strategic assault on, say, the Baltic republics, but its lack of strategic reserves means it would not be able to prevail in a prolonged war with NATO.

In fact, a conventional conflict with NATO might quickly escalate into a nuclear exchange, placing Russia’s nuclear forces center stage. The Russian fear is that an American conventional counterforce strike might incapacitate such a large proportion of its land-based missiles that US missile defenses would be able to absorb what could still be launched. Under such a scenario, Russia would lack effective nuclear deterrence.

The Russian military has therefore made modernisation of the Strategic Rocket Forces a high priority. Significant results have also been achieved in the development of new missiles and ballistic missile submarines. Some express concern that US nuclear forces are being left behind. Two facts undermine such worries.

One is that the two former superpower rivals are out of phase. Russia has made great strides in rebuilding its nuclear forces, but this effort will peak in the early 2020s, when most of the current programs are due to conclude. The US, meanwhile, is in the early stages of a programme that will peak within a decade. It will then be building a new long-range bomber, new ballistic submarines, perhaps even a nuclear-armed cruise missile, and either a new intercontinental ballistic missile (ICBM) or a modernised version of the Minuteman-III.

The upshot is that Russia will face a growing gap in nuclear capabilities on top of an already substantial gap in conventional capabilities. For all its public bravado, the Kremlin has cause for concern. This feeds into the current breakdown in arms control and confidence building, suggesting that Russian weakness, not strength, should be in focus.

The mainstay of the strategic bomber fleet is the venerable Tu-95 “Bear-H.” Like the equally iconic American B-52, it entered service in the early 1950s. The Russian decision to resume the Cold War practice of long-range bomber patrols has seen outdated turboprop Tu-95s probing the air space of neutral countries and NATO members alike.

Another Cold War legacy is the Tu-22M “Backfire.” In service since 1972, it is Russia’s most versatile bomber. A multirole supersonic aircraft with variable-sweep wings, it is designed for strategic bombing missions and for use by the Russian Navy in a long-range anti-shipping role.

The key component looking forward is the supersonic Tu-160 “Blackjack.” Introduced in the 1980s, it remains the world’s largest bomber. Built for high- and low-level penetration, it was developed in response to the US B1-B Lancer. Due to its extremely high cost, no more than 39 are believed to have been built, of which 16 remain in service. The reason it is so important lies in the successful development of long-range cruise missiles.

The Russian intervention in Syria offered its strategic aviation the opportunity to test-fire the stealthy MKB Raduga Kh-101 cruise missile, a variant of the Soviet-era Kh-55 missile. The Tu-160 can carry 12 of these – designated as Kh-102 when equipped with nuclear warheads.

This shift in thinking implies that strategic bombers will no longer be tasked with penetrating enemy airspace, which in turn means that stealth is no longer as important. The plans to build the Tupolev PAK-DA stealth bomber, therefore, are unlikely to be realized any time soon.

The Russian military is instead placing emphasis on developing a new generation of the Tu-160. Known as the Tu-160M2, it has all-new engines, new radars and new avionics. A prototype flew in January 2018, and 50 may be built. Although bombers are slow to get into position, and susceptible to interdiction, it offers Russia a potent additional platform for launching cruise missiles, which are hard to detect.

The second part of the nuclear triad consists of submarine-launched ballistic missiles (SLBMs). The massive submarines that carry these weapons, colloquially known as “boomers,” constitute the ultimate stealth weapon. Under the current programme, the Russian Navy is to receive eight new Borei-class submarines. Three have already entered service, all named after mythological heroes in Russian history – Yuri Dolgorukiy, Alexander Nevsky and Vladimir Monomakh. Designed to carry 16 Bulava missiles, with up to 10 warheads each, they wield awesome firepower. Yet, serious questions remain concerning their reliability.

The Bulava has been much-hyped by Russian media, due to its alleged ability to defeat U.S. missile defense. But it has failed 10 out of 27 flight tests. The US Navy’s comparable Trident D-5, widely regarded as the best SLBM in existence, has a record of 140 consecutive successful flight tests.

At the peak of pessimism about the Bulava, one Russian commentator even suggested it presented a greater danger to the Russian Navy than to its adversary. The statement brings to mind the disaster involving the submarine Kursk, which sank in 2000 when an experimental torpedo exploded onboard.

Much of the reason for the Bulava’s poor performance stems from the fact that the missile originally intended for the Borei, the Bark, turned out to be a dud. In 1998, after its first three test launches had failed, the program was closed. The contract instead went to the Moscow Institute of Thermal Technology, which had ample experience in designing and building land-based missiles but had never developed sea-launched missiles.

The problems may have been overcome. In May 2018, the Yuri Dolgorukiy fired a successful salvo of four Bulava missiles, after which the system was declared operational. Nevertheless, serious question marks remain.

The third part of the triad is land-based ICMBs, launched either from silos or from road-mobile launchers. The long-standing workhorse of this force is the silo-based SS-18 (“Satan”). Capable of carrying 10 warheads, it has been in service since 1975 and still accounts for around half of Russia’s deployed strategic warheads.

The SS-18 was built by a company called Yuzhmash, in what was then Dnepropetrovsk in the Soviet Republic of Ukraine. Following the outbreak of the Ukraine-Russia conflict, Russia lost all ties with Ukrainian arms manufacturers, including Yuzhmash. As the last of the SS-18s was deployed in 1988, even the “youngest” of the missiles have long since exceeded their 15-year service life. This has raised serious doubts about their maintenance and safe decommissioning – a worrying development given the liquid propellant used in these missiles is as toxic as chemical warfare agents.

The SS-18s must remain in service until replacements can be found, and this is taking time. The first missile to be deployed after the collapse of the Soviet Union was the single-warhead SS-27 Topol-M, which entered service in 1997. More recent developments include the RS-24 Yars (also known as SS-27 Mod 2), a modified version of the Topol-M that can carry up to four warheads, and the RS-26 Rubezh/Avangard, a medium-range version of the Yars.

Because of the large number of warheads deployed on the SS-18s, a lot of emphasis is being placed on the RS-28 Sarmat (SS-X-30 Satan II), a huge silo-based ICBM capable of carrying 10 heavy “multiple independently targetable reentry vehicle” (MIRV) warheads. The first flight test is planned for early 2019. It is to enter serial production in 2020 and become operational in 2021. The Sarmat is supposed to have unlimited range, allowing it to attack across both poles and defeat U.S. missile defenses. Yet some reports suggest its development has been marred by serious problems.

Russian concern about a replacement for the SS-18 links back to worries about arms control. Under the New Strategic Arms Reduction Treaty (New START), concluded in 2010, the two sides agreed that by February 2018 their strategic forces would be reduced to no more than 700 deployed launch vehicles (ICBMs, SLBMs and bombers) and 1,550 deployed strategic warheads.

According to numbers reported in January 2018, the US retains superiority in deployed launchers (660 versus 501). Although both sides have brought the number of deployed warheads to within limits, the US has reserved an edge by significantly “downloading”: Most of the deployed Minuteman-III ICBMs can carry three warheads, yet now have one. The Trident D-5 SLBM has a capacity of eight warheads, but currently average only four or five.

Russia is at a significant disadvantage when it comes to non-deployed warheads. It is believed to have around 500, while the US has well over 1,000. If New START is not prolonged in 2021, which looks increasingly likely, “uploads” of additional warheads to deployed launchers could boost the US arsenal to well beyond anything Russia could match. Although it would take weeks to implement an upload, this state of affairs shows how the Kremlin’s behavior is driven by Russian vulnerability.

Looking ahead, the main cause for concern is not the strategic nuclear arsenals themselves but that both sides are clearly planning for rapid deployment and a major conventional conflict. This highlights the danger inherent in the ongoing blurring of lines between conventional and nuclear war. It also underscores why scrapping the INF Treaty may unleash a dangerous new arms race.

The Kremlin seeks to camouflage its vulnerabilities via aggressive saber rattling. It has already made a point with the intermediate-range Iskander missile, which can carry both conventional and nuclear warheads. It has learned that deployments to the Kaliningrad exclave, Crimea and elsewhere are a good way to keep NATO on edge. Its introduction of the Kalibr and Novator cruise missiles has added extra punch.

In its recently published Nuclear Posture Review, the U.S. warns that Russia has evolved a strategy of “escalate to deescalate,” meaning that if faced with the risk of losing a conventional war, it would launch a single nuclear missile. This would present NATO with the choice of backing down or responding in kind, risking escalation to mutual destruction.

Rising tensions are increasing the danger that a conventional confrontation may escalate into a nuclear exchange. Although this would seem to indicate the urgent need to return to arms control, the likelihood of that happening is shrinking fast.

Stefan Hedlund is professor and research director at the Centre for Russian and Eurasian Studies at Uppsala University, Sweden.

View from Berlin: The risk of deepening the divide
Yulia Tymoshenko is a threat to pro-EU reforms in Ukraine
Comment