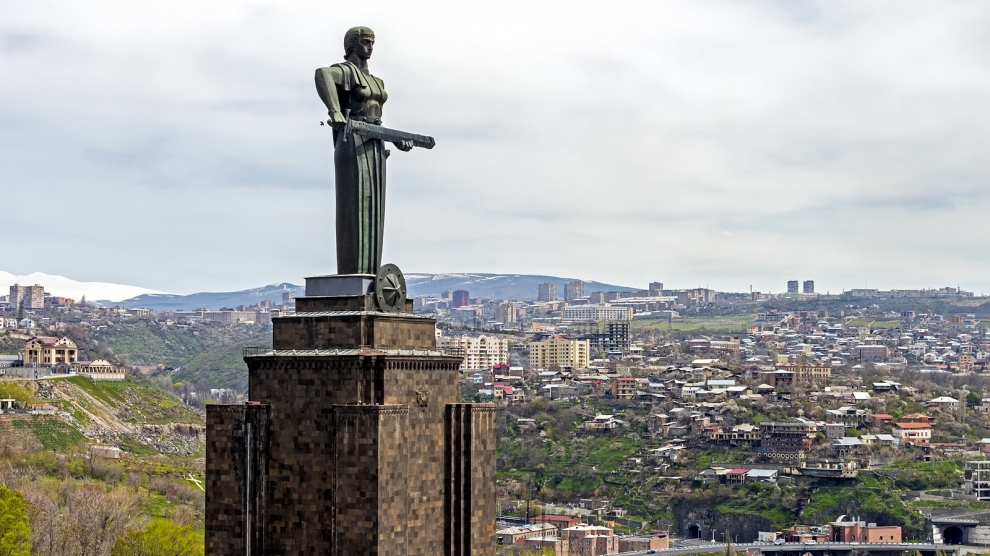 The post-revolution state building current taking place in Ukraine and Armenia offers case studies on the difficulties of recovering from authoritarian legacies amidst Russian authoritarian resistance. One of the intriguing questions is what the core effects of the revolutions on Ukraine’s and Armenia’s political and economic landscapes are.

This provokes an inquiry into the broader foreign policy implications of the revolutions. In contrast to Ukraine, where the fundamental rapprochement with the EU was the core rationale behind the Euromaidan, Armenian society has not offered much resistance to country’s unstoppable absorption by Russia. While the president of post-revolution Ukraine, Petro Poroshenko, promptly signed the EU Association Agreement in June 2014, his Armenian counterpart Nikol Pashinyan was quick to confirm Armenia’s further allegiance to Russia. This has been significantly inconsistent with Pashinyan’s pre-revolution discourse, featuring a strong tendency to blame Russia for a series of authoritarian malpractices inflicted on the country. While in opposition Pashinyan would condemn Russia’s ‘cynical interventions’ in Armenia’s domestic affairs, but ever since rising to the top, Pashinyan has invariably stated that Armenia’s foreign policy would not undergo any u-turns. Furthermore, Armenia would seek further rapprochement with its ‘indispensable ally’ and ‘big brother’ Russia.

That said, irrespective of the power transition, Armenia is faced with path dependency and there is no magic bullet to reverse country’s absorption into the Russia-led Eurasian Economic Union. Pashinyan would avoid steps that would prompt Russia into inciting and supporting an anti-revolutionary movement in Armenia. Essentially, the persistence of Armenia’s long-standing troubled neighbourhood further feeds the narrative that the security alliance with Russia is irreplaceable in the face of Turkish-Azerbaijani hostilities. The Velvet Revolution has not moved the needle on the Nagorno-Karabkh conflict or on hostil Armenian-Turkish relations.

Both the Armenian and Ukranian leaderships have tended to frequently appeal to enemy images of ‘coercive’ neighbours in an attempt to assert their countries’ ‘victimhood’ and present their plight as ‘structurally inevitable’ in their ‘dog-eat-dog’ neighbourhood. In the Ukrainian context the enemy image of Russia has become a crucial ciriteria for defining the self, as well as securing the national boundaries by the representation of danger. Yet, quite often Poroshenko’s government took several steps to restrict freedom of expression and media freedom, invoking as justification the need to counter Russia’s military aggression in eastern Ukraine and anti-Ukraine propaganda. All these steps are testaments to authoritarian legacies and extremely fragile democracies, where the ruling elites appeal to enemy images to legitimise their power and justify unpopular policies. Yet, in contrast to Ukraine, which slowly but surely is stepping down the path to the EU association, the Armenian leadership seems unwavering in its commitment to the Russian-led trajectories.

Clearly, both the Euromaidan and the Velvet Revolution were significantly fuelled by severe economic slumps with ensuing poverty and lack of economic oppurtunities. Not surprisingly, economic recovery was put at the heart of both Poroshenko’s and Pashinyan’s agendas.

Ukraine’s subscription to the Association Agreement opened up huge opportunities for comprehensive economic reforms. Poroshenko’s government placed a special emphasis on reforming the gas sector, as a critical step to build resilience against Russia’s ‘energy weapon.’

Notably, Poroshenko’s government made crucial strides in cutting subsidies on natural gas – previously misused by Ukranian elites to ensure electoral support, restructured Naftogaz and, most importantly, stopped Russian gas imports. Even though the liberalisation of energy prices and energy tariff increases have sparked public discontent, the reforms were absolutely necessary to fight against systemic corruption in the Russian-dominated gas sector.

Remarkably, the former Armenian president, Serzh Sargsyan, would candidly admit that one of the determining factors in Armenia’s decision to join the Eurasian Economic Union instead of signing the Association Agreement with the European Union was heavy energy dependence on Russia. That said, making a ‘civilisational choice,’ would condemn Armenian consumers to pay thrice more for Russian gas. In an attempt to fight against Gazprom’s abuses, Pashinyan’s government launched an investigation into Gazprom Armenia which uncovered a series of irregularities and accusations of tax evasion and corruption. In response, Gazprom determined to increase gas prices in 2019, thus showing the consequences of fighting against its monopoly. That said, by using Gazprom’s energy weapon and increasing gas prices for Armenia, Russia strived to thwart the repetition of Ukranian-style gas reforms in Armenia.

Notwithstanding the setbacks endured in energy sector, there has been a tendency for Pashinyan’s discourse to revolve around ‘economic revolution.’ The government’s plan promised a significant decrease in severe poverty in Armenia and a significant decrease in unemployment by 2023. Despite Pashinyan’s promises of ‘economic revolution’ the expected five per cent annual growth is far from being revolutionary. There are considerable obstacles to ‘economic revolution,’ emanating from Armenia’s steady integraton into the Russian-dominated Eurasian Economic Union, which precludes Armenia from establishing free trade agreements with non-member countries.

While acknowledging the dire constraints to economic recovery, Pashinyan’s pre-revolution promises of imminent changes have been replaced with a so-called ‘2050 economic vision’ – anticipating 15-fold GDP growth by 2050. Arguably, the promises of a bright future aim at keeping the flame of post-revolution enthusiasm alight in the face of possible economic slowdown and setbacks.

Beyond the energy sector, both the Armenian and Ukranian governments prioritised tax reforms and strived to simplify tax systems. Yet, in both countries progress in tax reforms has so far been limited. The setbacks in economic and broader democratic reforms are suggestive of the difficulty of recovering from an authoritarian legacy and implementing fundamental reforms. Overcoming bureaucratic resistance to change, eliminating systemic corruption and diminishing the oligarchs’ outsized influence remain significant problems in both Armenia and in Ukraine.

Systemic corruption, that has permeated every section of society and government has long condemned Ukraine and Armenia to underdevelopment, poor governance and inability to implement reforms. Even though by introducing the anticorruption court in Ukraine and by criminalising illicit enrichment in Armenia, Poroshenko’s and Pashinyan’s governments strived to make a difference, both countries need to do way better against entrenched corruption.

Yet the biggest challenge to democratic reforms in these countries is Russian authoritarian resistance. The annexation of Crimea, as well as the hybrid war waged by Russia against Ukraine in Donbas, has led to a situation, where instead of building democratic institutions, Ukraine is forced to build up its military capabilities and counter Russian aggression. As long as the Kremlin meets European foreign policy choices of former Soviet countries with coercion, there are reasons to worry about Russian authoritarian resistance to economic and political reforms.

Arguably, keen to consolidate his power, Pashinyan would avoid steps that would potentially induce the Kremlin to inject volatility in Armenia and punish its ‘disobedience’ as it did in Ukraine. Not surprisingly, during his first meeting with the Russian president, Pashinyan gave credit to the ‘balanced position’ that Russia took during the internal political crisis, predating the revolution in Armenia, thus implying that Russia has every possibility to interfere in Armenia’s domestic affairs and change the balance of power. Meanwhile, the fear of authoritarian resistance, coupled with the power of an authoritarian legacy inevitably militate against long-desired fundamental economic and political reforms – put at the heart of the revolutions.

Now is not a time to be complacent
The Caspian region: Critical ground with high economic potential
Comment